In about three weeks one of Europe's most widely known events will take place: the legendary running of the bulls in Pamlona, or known locally as the "Fiesta de San Fermín".

The city is famous worldwide for the running of the bulls during the San Fermín festival, which is held annually from July 6 to 14. This festival was brought to literary renown with the 1926 publication of Ernest Hemingway's novel The Sun Also Rises.

Those with a literary background will turn their thoughts to the individual who propelled this festival into its legendary status, Ernest Hemingway in his biographical novel "The Sun Also Rises". The novel is autobiographical and the events and characters are real. 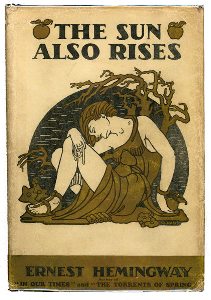 This is part 1 of a two part question seeking to recreate Hemingway's route to Pamplona. So he left the seedy bordellos of Montparnasse and took the 20 minute walk to Gare d'Orsay where boarded a train to Navarre. But today that station is a museum. What station would one go to today?

Hemingway's first stop on the way to Pamplona, and the "meat" of this question involves the sleepy village of Burguete-Auritz where he stopped for a day of trout fishing on the Irati River.

We have this strongly autobiographical description...

The road went up a hill and we got into thick woods, and the road kept on climbing. Sometimes it dipped down but rose again steeply. All the time we heard the cattle in the woods. Finally, the road came out on the top of the hills. We were on the top of the height of land that was the highest part of the range of wooded hills we had seen from Burguete. There were wild strawberries growing on the sunny side of the ridge in a little clearing in the trees.

Ahead the road came out of the forest and went along the shoulder of the ridge of hills. The hills ahead were not wooded, and there were great fields of yellow gorse. Way off we saw the steep bluffs, dark with trees and jutting with gray stone, that marked the course of the Irati River.

That seems clear enough, and later there is this dead give away...

I got my rod that was leaning against the tree, took the bait-can and landing-net, and walked out onto the dam. It was built to provide a head of water for driving logs. The gate was up, and I sat on one of the squared timbers and watched the smooth apron of water before the river tumbled into the falls. In the white water at the foot of the dam it was deep.

Where is this dam? How can someone get there? Or if it's no longer there, where was it situated?

One pilgrim provided this "hypothetical" image... 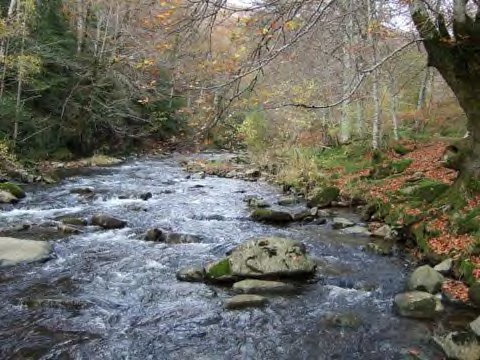 It looks right for trout, but there's no dam and no indication that a dam was there.

Question: how can a literary pilgrim reach this fishing spot, the place that matches what was written?

See also: Following in the Footsteps of Hemingway in Italy

Vaguely related: If you only had two days in Venice

Well, I've tried a bounty and that didn't work (so far, I'm impatient), so here is my guess:

There is a different view here for the moment, by Uranzu, described as Río Irati. Marked "Attribution-Noncommercial-Share Alike" I dare not upload it but since Panoramio is closing this is my excuse for impatience.

It is clearly something than spans the river and there seems nothing else in that area that does (other than bridges).

The "hypothetical" image is in my opinion extremely attractive but extremely unlikely to be representative of what is being sought because of walked out onto the dam. It was built to provide a head of water for driving logs and hence even if downstream of a dam this does not look nearly deep enough. Anyway, the Irati river in this area is much more substantial.

I am guessing that even after a century something a solid as a dam to hold back water for logs would leave some trace, even if constructed of wood.

The route may have been what is today NA-140/NA-2040, but as Google Maps shows, there is a viable alternative: 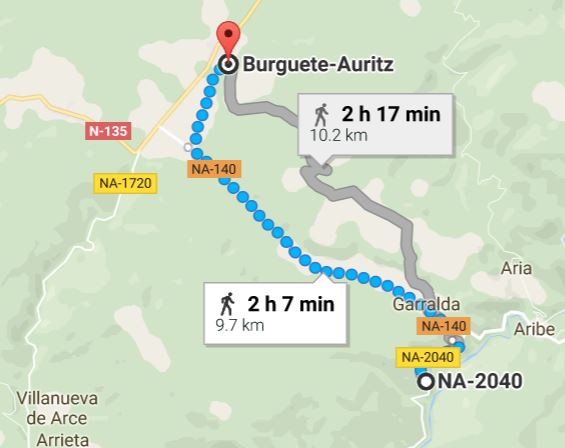 @Dorothy has found what seems the relevant Fishing pilgrimage in the footsteps of Ernest Hemingway by Yvon ZILL. This image from there: 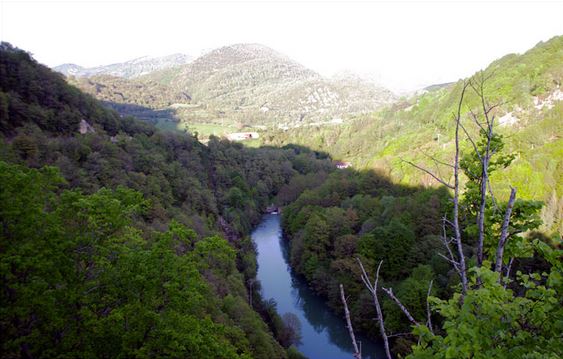 is sandwiched between the text:

The road came out from the shadow of the woods into the hot sun. Ahead was a river-valley. Beyond the river was a steep hill. There was a field of buckwheat on the hill. We saw a white house under some trees on the hillside. It was very hot and we stopped under some trees beside a dam that crossed the river.

Judging by this map (courtesy Google):

The photograph may have been taken from somewhere around the bottom left corner facing towards the top right (Aribe). The dam being marked with the line across the river and the white house under some trees on the hillside being the Baños de Aribe shown in this video.

Not the answer you're looking for? Browse other questions tagged spain where-on-earth pilgrimages fishing pamplona or ask your own question.

11
Following in the Footsteps of Hemingway in Italy
5
Literary Pilgrimage to Top Withens, Yorkshire (Wuthering Heights)
1
If you had only two full days to visit Venice Italy for the first time, what would you see and do?

8
Is a day trip between Barcelona and Andorra possible?
5
Is there a thematic train trip based on Christmas?
7
Walking the Caminito Del Rey, or part of it, with children
11
Following in the Footsteps of Hemingway in Italy
1
Getting a “Número de Identidad de Extranjero” (NIE number) for a 10-day trip in Spain
1
Can I visit France during my trip to Spain with a single-entry Schengen visa?
2
Schengen visa for spouse, for business trip followed by leisure trip