Is a transit visa required for airport terminal change in Dubai?

I would like to travel to Qeshm Island (free zone area in Iran) via Dubai Airport.

At Dubai Airport I arrive at terminal 1, and my flight to Qeshm leaves from terminal 3.

How can I pass from Terminal 1 to Terminal 3? Will I require a transit visa?

You do not need a transit visa. You can walk from Terminal 1 to Terminal 3.

As you can see from the image - T1 and T3 are joined by a walkway, and the Airbus terminal is joined by a train.

Terminal 2 is the terminal you have to worry about. There are very few flights that connect from this terminal, to airlines flying out of the other two terminals. The only exception that I know of is FlyDubai which has some flights that are transiting on Emirates.

To get from that Terminal 2 to Terminal 1 or Terminal 3, you need either a connecting flight (in which case, you will be taken by a special bus) or you need to have a transit visa. 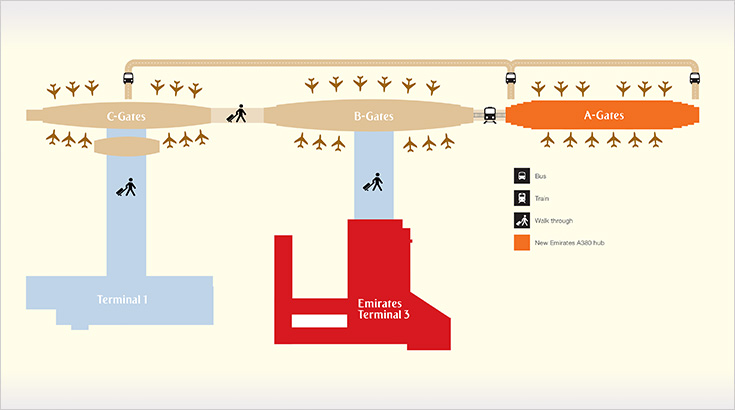 Not the answer you're looking for? Browse other questions tagged visas transit dxb or ask your own question.

1
Transiting from Terminal 1 to 3 at Dubai airport
6
Is a visa required for Qeshm island in Iran?