This is without doubt the most famous site of all holy wells and indeed Christianity in the county, now the main well is perhaps a modern one (we’ll explore its provenance below).) but in the ruins of its famed Abbey are ‘Wishing Wells’ clearly holy wells, the more likely location of the 1061, vision of Mary by Richeldis de Faverches,, who built a replica of the Holy House where a spring arose. The site became a major pilgrimage centre and its waters were said to be good for curing headaches and stomach complaints. If these are the original site, after Reformation, they denigrated to mere wishing wells. 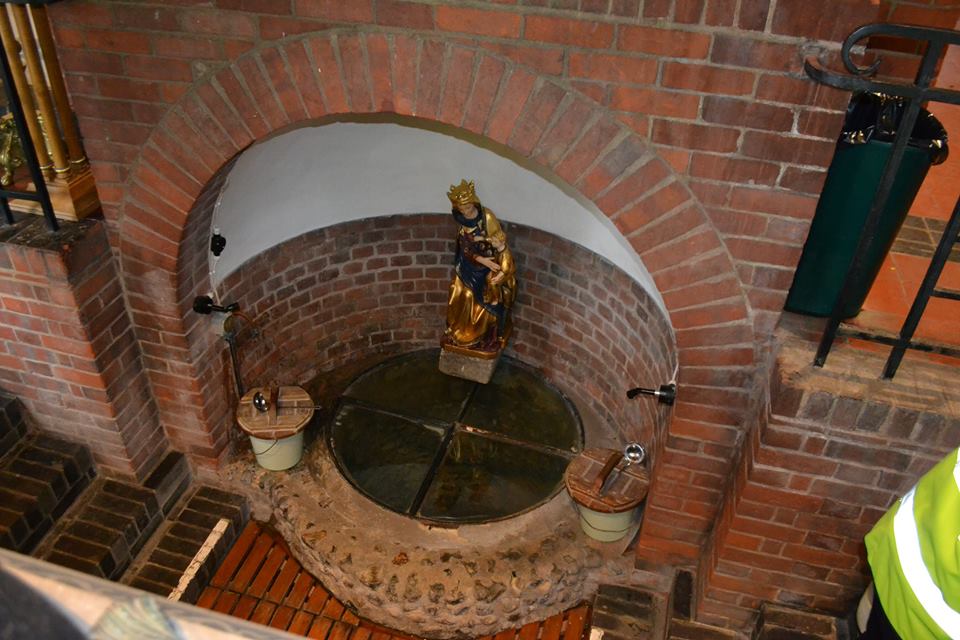 While contemporary trekkers and walkers make their own pilgrimages to the well, the site itself has attracted pilgrims for about 900 years.

I am looking for information about the traditional pilgrimage route to the site, especially those used by the eight English monarchs who visited the well.

King Henry III made his first of many pilgrimages to Walsingham around 1226. He was a great supporter of The Virgin Mary and the Holy House at Walsingham became one of the centres of his devotion. He generously gave the Canons his royal patronage.

Following his example nearly all the Kings and Queens of England, up to and including King Henry VIII and Queen Katherine of Aragon, came on pilgrimage to the Holy House, until the Dissolution of the Priory in 1538.

With information about their routes I will be able to plan a meaningful visit.

I assume that the final approach to the shrine followed the River Stiffkey because of the number of secondary shrines on the banks of the river. Presumably pilgrims would have picked up this route starting at West Barsham.

And again I assume that the route used Watling Street from Canterbury to St Albans because that route has been well established dating back to the Sub-Roman era.

I am content with these assumptions, but they leave about 100 miles unaccounted for. I would like to travel on, or near to, the traditional route, it's more enjoyable that way. Tips and techniques from native Norfolkians (of the English variety) are especially welcome.

Question: how do I join up St Albans to West Barsham such that I would be near to or on the traditional pilgrimage route? It doesn't have to be exact, just plausible and supported by factual detail (not opinion-based).

Note: Google maps shows the walking route as leading through Cambridge, which is plausible, but the route then follows the River Cam northward, which is less plausible. The Google maps route also bypasses Verulamium and Baldock altogether, which makes its value even more questionable.

The TSE archives on pilgrimages is here.

Going north along the Cam from Cambridge (and joining the Great Ouse) takes you to the cathedral city of Ely. According to the Cambridge Rambler's page Pilgrims Way, Ely was a staging point for pilgrimages to Walsingham going via Brandon, Weeting, Cranwich, Swaffham, Castle Acre and Sculthorpe. Up until the start of the 18th Century, the Cam was navigable from the sea and the area around north and north east of Cambridge was basically marshland and so taking the straight line to Walsingham was likely to be impossible.

Not the answer you're looking for? Browse other questions tagged routes england pilgrimages or ask your own question.