What regulations should a European driver know when driving in the US?

There are the obvious ones. The US has the keep-your-lane system, where as in Europe you are expected to keep to the right (left for UK) as long as possible. On my latest travel to the US, I was confronted with the possibility to go through a red light if you turn right, unless it is explicitly not allowed.

What should a european driver know when driving in the US? What are the do's and don'ts compared to driving in Europe.

The other two answers pretty well covered things, but here are a few more notes:

To me, these are the two most important things drivers visiting the US should know:

This isn't a regulation, but it could be very important nonetheless. If stopped by the police, do not have the reflex of reaching into the glove box for the car's papers. This could be interpreted as reaching for a gun, and you risk getting shot preemptively. Once you've stopped your car, remain in your seat, and keep your hands well in evidence (on the steering wheel).

See also more recommendations by a US police officer.

The following apply to California versus Sweden, at least:

In most of (mainland) Europe there's a priority for traffic coming from the right (on an intersection without traffic lights), and you don't necessarily have to stop when you see there's no other traffic.

So one of the things I think a lot of Europeans will have trouble with at first when driving in America is the fact that on an intersection without traffic lights, there's a system of first come first serve, and you ALWAYS HAVE TO STOP (apparently - see the comments - you only have to stop when there is a stop sign). There are a lot of intersections in America which have a stop sign on all four directions, then the first come, first serve system is applied. That's something which doesn't exist in Europe because you simply don't have intersections with stop signs in all directions (mostly only 2 of them and the main road has priority). At least I don't know of any.

I say at first, because I think it's a very good (if not better) system once you get used to it. But that might also have something to do with the fact that most intersections in America are much larger than they are in Europe, so it's usually much easier to see all the traffic coming from the different directions.

In the United States, a traffic light showing a green left arrow indicates a "protected left turn": oncoming traffic has a red signal, as do conflicting pedestrian crossings. Here is an example, taken from an article by the Federal Highway Administration: 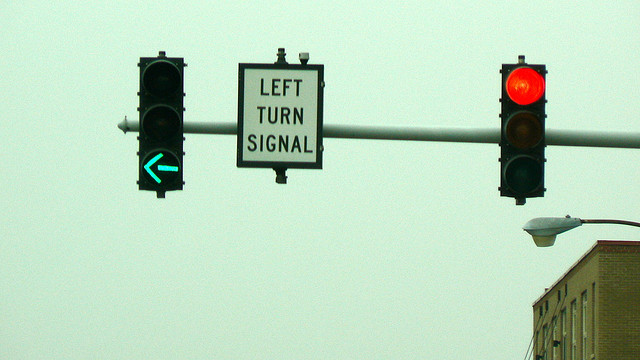 In Europe, a directional arrow signal does not mean that opposing traffic has a red signal. It just means that you can proceed in the direction indicated by the arrow, but still must yield the right of way as usual.

I was once in Italy, turning left at a 4-way intersection where traffic had to turn left or right because the street directly ahead was a one-way street in the wrong direction. To indicate this, the signal showed a left green arrow and a right green arrow. Unfortunately, I irritated an oncoming driver by cutting in front of him. He also irritated me because I thought he was running a red light. It was only a few moments later that I realized that I had been in the wrong, and why.

I can imagine that a European driver in the United States, facing a green left arrow, with cars approaching the intersection from the other direction, would probably wait before turning left, at least until it was clear that those cars were stopping. Any American drivers behind that European would most likely be irritated by that behavior.

Another difference with traffic signals: Most European signals are designed so it is not possible to see the signal for cross traffic, but this is possible with most American signals.

American intersections typically have at least one signal head on the far side of the intersection. Among other advantages, this allows the driver stopped at the stop line to see when the signal changes, because the signal is several meters ahead rather than directly overhead. See, for example, this image: 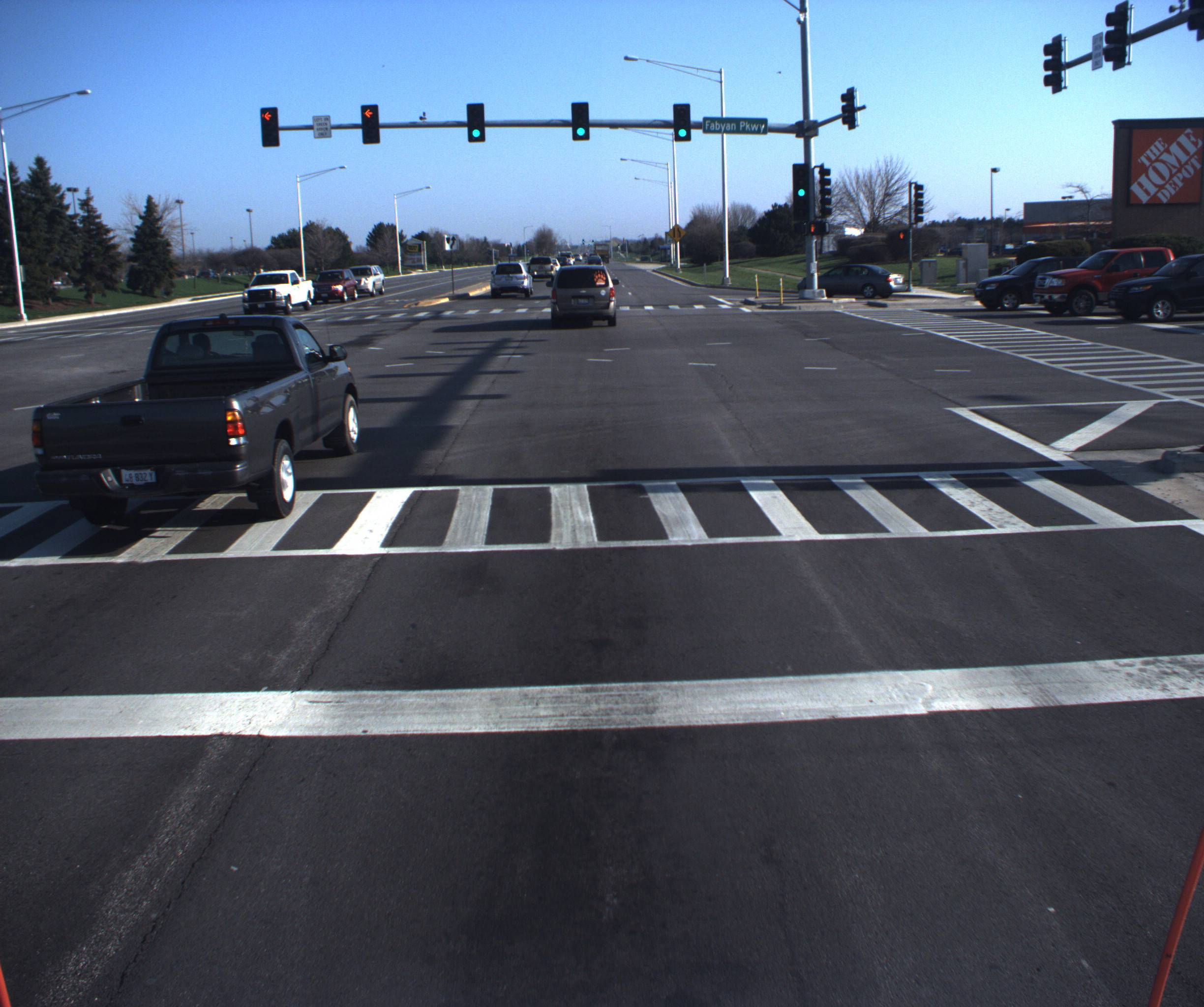 European signals are generally placed only at the near side of the intersection. Some consequences of this difference: 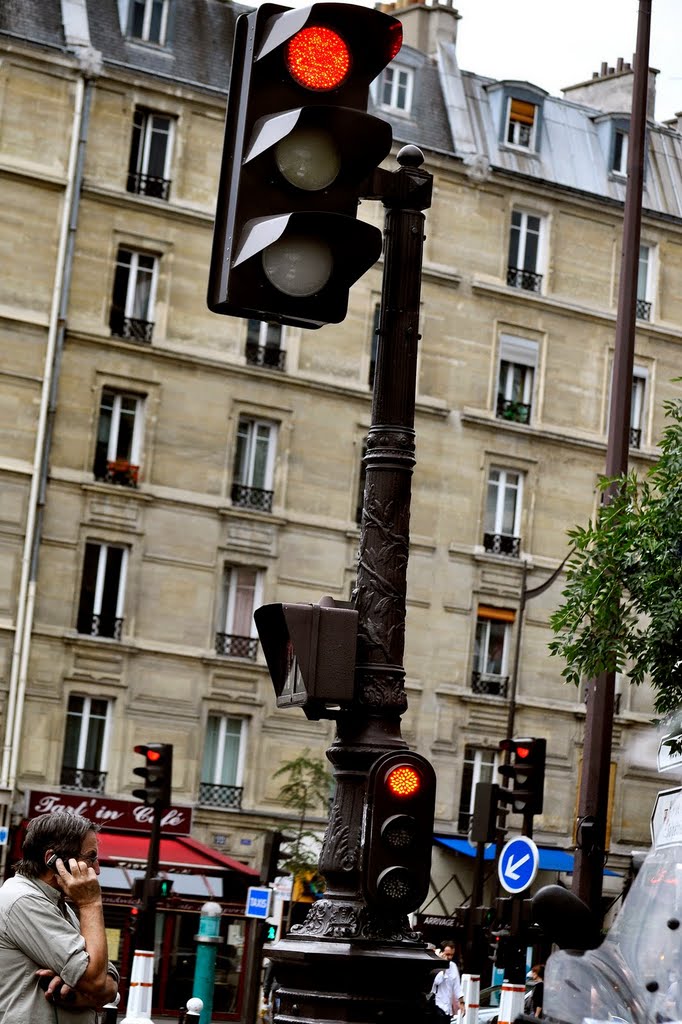 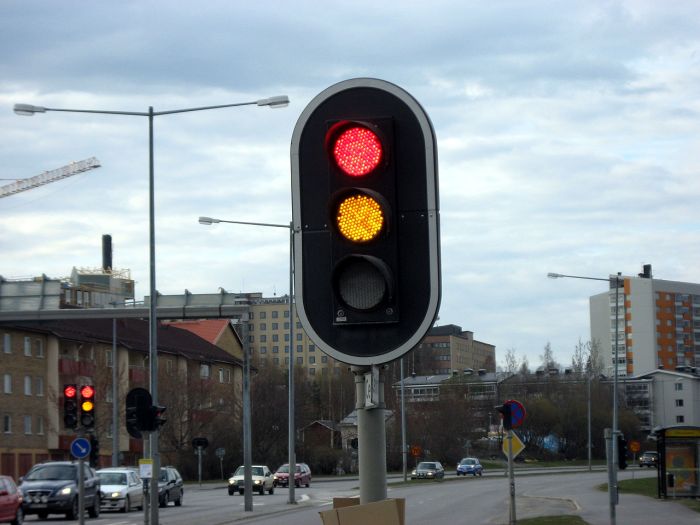 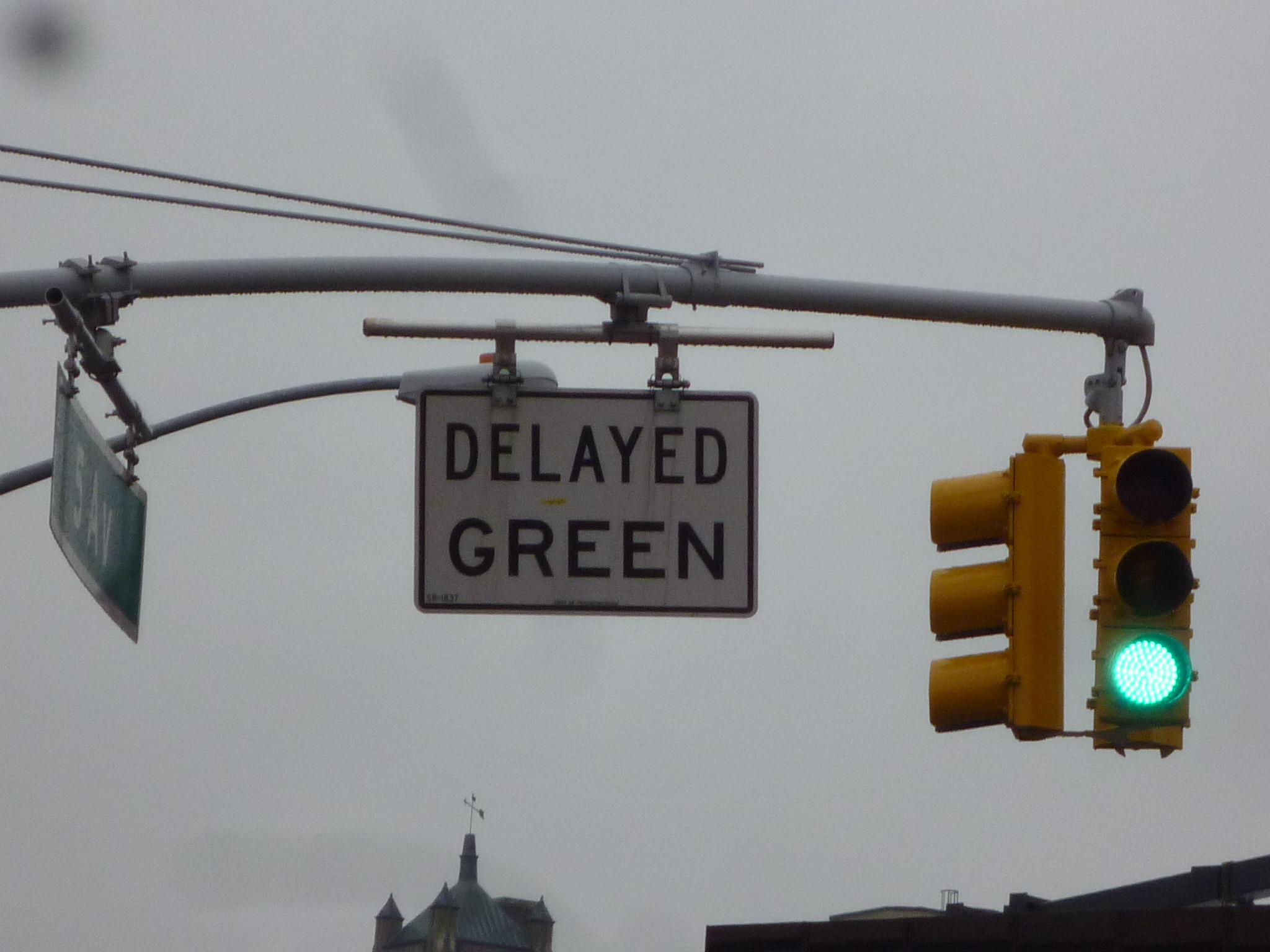 When I was a kid, I had no idea why one might have a "delayed green" -- I always thought, "of course it's delayed; if the green doesn't wait for the other light to turn red, then what's the point of having a traffic light?"

Finally, the delayed green signal can be an arrow indicating a protected left turn. Here is an example from Harrisonburg, Virginia (see the hburgnews.com article for a discussion): 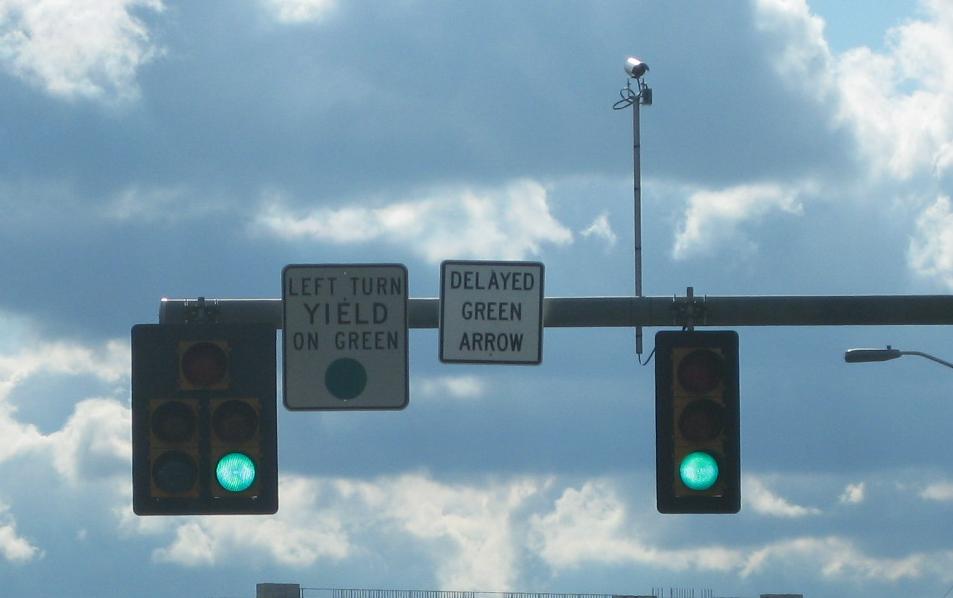 In California (and possibly in some other states) there is one strange regulation that states that the driveway starts at the curb so be careful when parking. The laws are very strict and it cost me 110 dollars because my car was slightly overlaping with the curb (50cm!). 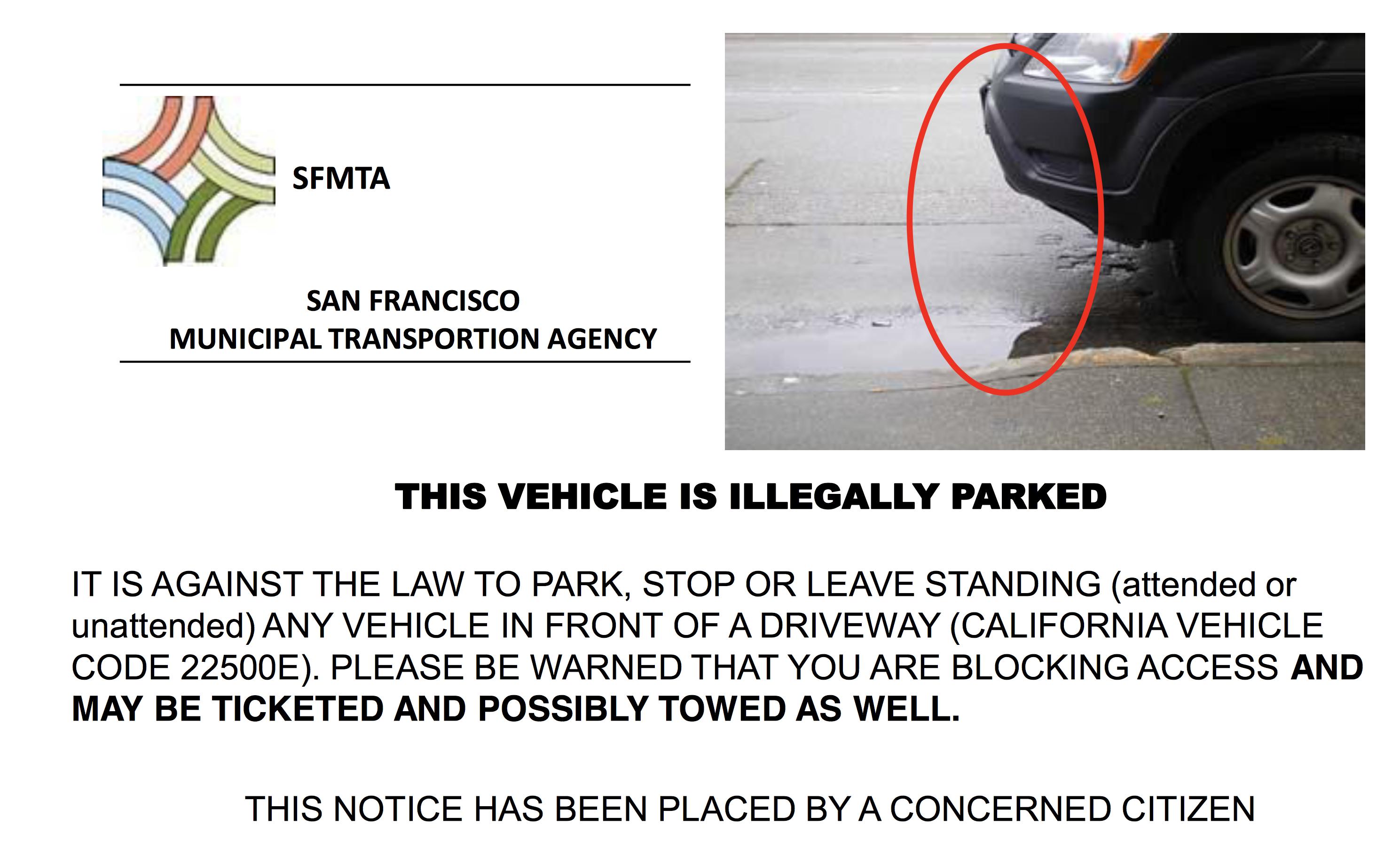 Corrected: Great question, but your presumption is partially incorrect: the US does have a not have a keep-your-lane system in many states, except where signs explicitly show, but not all. Many drivers do drive that way, but in fact you are supposed to behave in a similar (although not identical) way to how you do in Europe: stay to the right (or left) by default, moving over only to overtake..

This Wikipedia Page and this page summarise the laws state-by-state.

8
Driving across America as a UK driver. What specific rules do I need to know?
12
What should someone from the US know when driving in Italy?
18
Overtaking regulations when driving in Europe
10
Is there a way to find out about unique traffic laws for the US states I'm traveling through?
11
What are the differences between French road signs and American road signs?

12
Inter-state driving law references
18
Overtaking regulations when driving in Europe
12
What should someone from the US know when driving in Italy?
4
Stopping at a red light for a right turn in Massachusetts
24
How do I safely navigate a two-lane roundabout in the UK?
7
Left/right right of turn on an intersection in USA
8
Which left turn light do I follow in this California intersection?