Is there a website in which you can find flight tickets by filtering to certain durations of flights?

I know kayak, expedia, skyscanner etc but is there any website where I can filter results by flight leg.

Say I want to buy a ticket from New York to Tokyo. I can get a nonstop,1 stop or 2+stops flight. I need to filter to make sure that any flight in the itinerary is not longer than say 6 hours. Kayak only allows to filter by total flight duration (i.e. sum of all legs).

Before I deleted this answer I gave the /maxdur option to ITA Matrix as documented here. Unfortunately that only allows you to limit the maximum duration of the whole component of your flight. So, either the whole outbound, or inbound, or in the multi-city tab, the origin and destination.

It would be possible to use the multi-city option to contruct an itinerary with each component restricted to a certain duration, but you would have to list the possible transit points each time, which makes the whole exercise somewhat difficult.

I can't think of an alternative search engine that does this. Hopefully someone else will come up with one.

There are various sites that help you visualise routes so you can see by eye whether the length of the connections, e.g. flightconnections.com 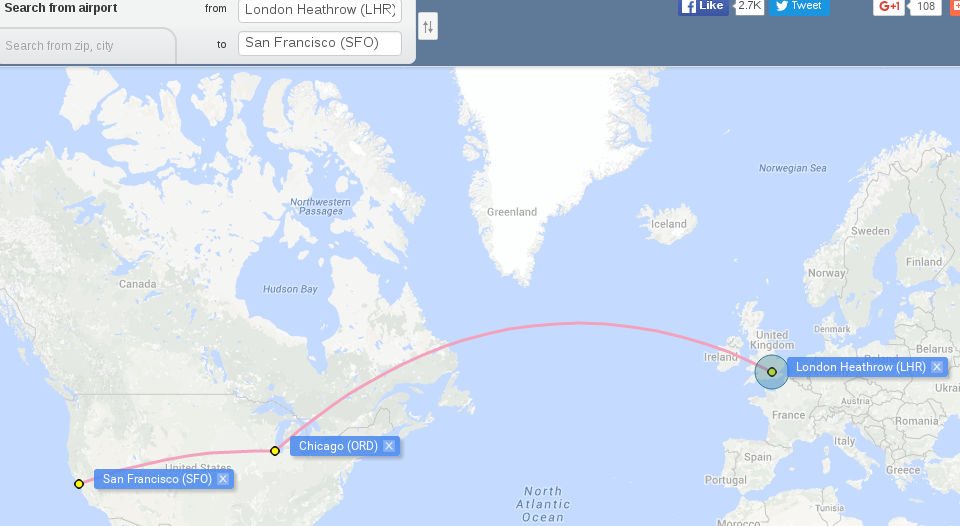 As an alternative, it is possible to do this visually in a way that isn't too time consuming. When searching for a flight in Matrix, it is possible to switch to the time bars view, and a NYC-TYO search would look like this for a search From: NYC::F F F To: TYO 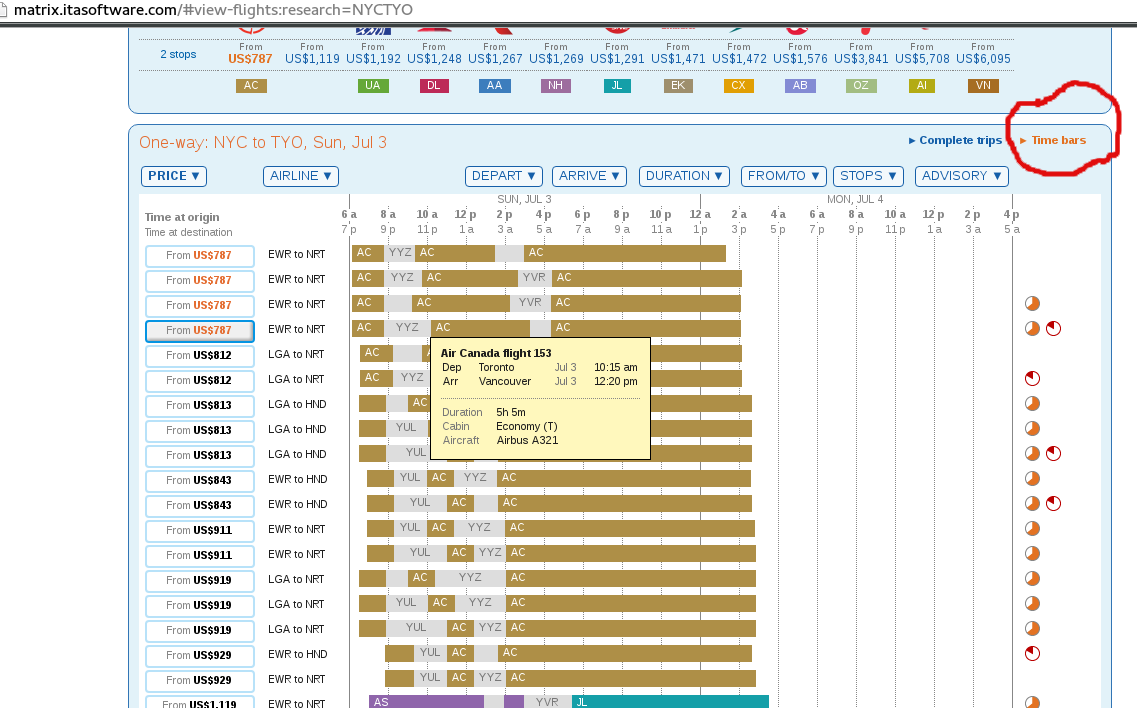 That still doesn't solve your problem of specifying the maximum duration.

I took a slightly different approach and downloaded the airline route mapper database of routes, calculated the distance between origin and destination and wrote a sqlite3 SQL query to find all routes from JFK to NRT with no leg longer than 4000 miles which was about as short as I could do while restricting to 3 legs. e.g. 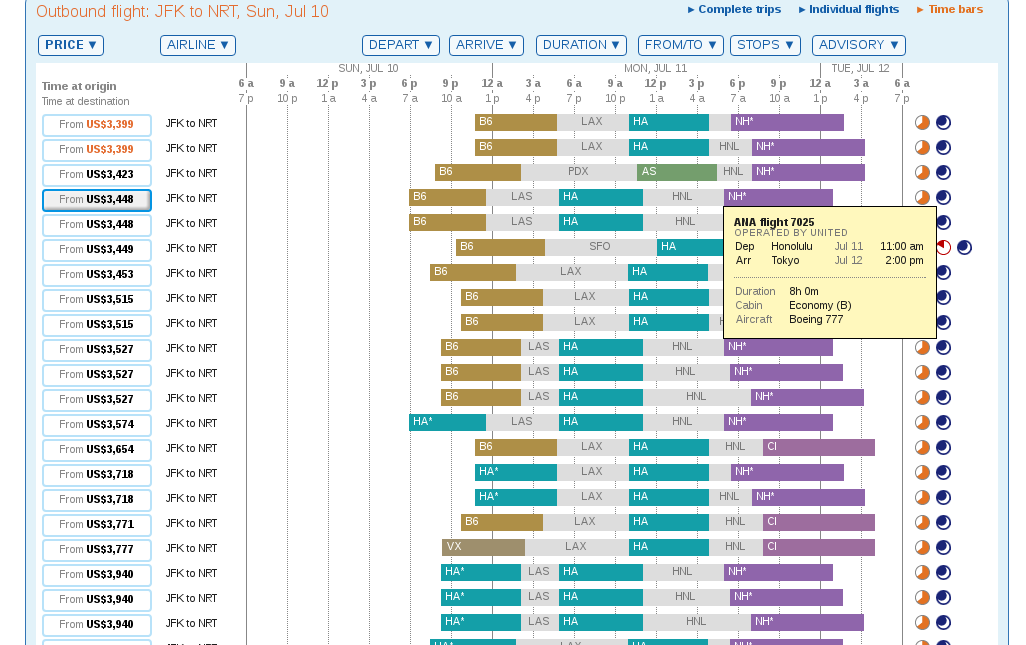 An alternative site to see timebars is hipmunk.

This looks a lot closer to what you're looking for, but needs a bit of SQL to produce the intermediate transfer points.

I can't see why any site couldn't add this feature and even the inverse where you want all legs longer than a certain distance (hi BA TP runners).

Hopefully this gives someone else some ideas.

Six hours makes searching easy if you are crossing continents because you will need a mid-ocean stop and there are not many of those. After that you just know which big hubs are roughly en route and stitch it together. You are reverting to a much earlier era of flight. Is it doable still? Yes, but don't expect it to be easy or quick. In other words: the way I would search this is not to search but rather know which route I want to take because there are not that many ways to hop from one end to the other end of the world with six hours tops. And then buy many tickets. You can check flight times on Google Flights.

In practice this will (almost always) mean that you fly through Honolulu or Rejkjavik. Over the Atlantic, some very eastern Canadian airports are less than six hours from Europe, for example YYT to LHR is only five hours and YHZ to LHR is 5:55 and that's about it. These, however, will be very expensive except the seasonal WestJet flight from YYT to LGW. Everything else is out, for example the YHZ-FRA Condor flight is too long, 6:40.

Flying from the US to Europe via Rejkjavik is very heavily marketed by Icelandair, you will have no problems booking a trip. Toronto and New York just to name two large hubs are less than six hours away and all of Europe is a short flight from KEF.

Now let's turn to the Pacific Ocean, as I mentioned you need to stop in Honolulu, that's evident. San Francisco-Honolulu is the shortest and even that's 5:23-5:40 depending on which airline you ask.

In my experience buying a JFK-(west coast)-HNL plane ticket and a HNL-(Asia) plane ticket might be cheaper than a single ticket.

However, HNL-(Asia) is longer than six hours. You have two choices. Either you give up on the Pacific Ocean and go the other way around: you need to start out to Rejkjavik. Then, again we look for our next tentpole: Central Asia is not particularly rich in hub airports. Your choices are Novosibirsk, Astana, Tashkent and New Delhi.

Let's see how each work out, some European hub, Moscow, Novosibirsk, Khabarovsk (5:15) or Vladivostok (exactly 6:0), Tokyo. It'd be easier if Keflavik-Moscow existed but alas, it doesn't seem to.

Going in the middle is actually the least stops this way 'round: Frankfurt, Tashkent or Astana, Beijing, Tokyo. This route is very remarkable because almost everything in the world except Australia is less than a six hour flight from one of the stops: New York-Rejkjavik-Frankfurt-Astana-Beijing.

Back to the Pacific Ocean. As I mentioned you need to San Francisco, Honolulu and then you need to use the United Airlines Island Hopper: 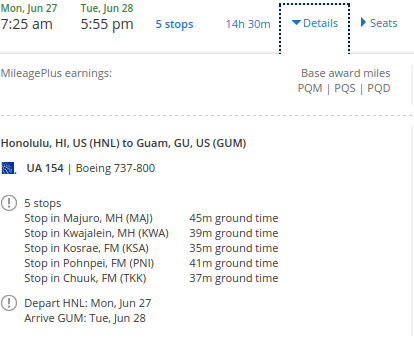 The longest leg is Honolulu to Majuro is 05:04, Guam to Tokyo is three hours or so. Although it's more stops than the Iceland-Central Asia route I described above, it's a much easier trip since it's one flight for five of the stops.

Edit: finally, Jonathan Reez found another route. The background is: in old times Anchorage and Gander used to be the refuelling airports and I dismissed them in chat as not being serviced internationally any more. Turns out, you can fly from Anchorage to Petropavlovsk once a week in the summer with Yakutia and on to Tokyo with the same airline. The ANC-PKC leg leaves on Monday, arrives on Tuesday. The PKC-NRT legs leaves on Saturday... but this is certainly the fewest stops. You can fly to Tokyo with S7 on Thursdays via Vladivostok, though. To get to ANC I'd recommend doing NYC-DEN-ANC on United so you don't have >6 hour legs.

I like hipmunk.com for this sort of stuff. It gives a nice overview of flight segments (including letting you know if wifi is available on which legs) and you can filter by stops and other features: 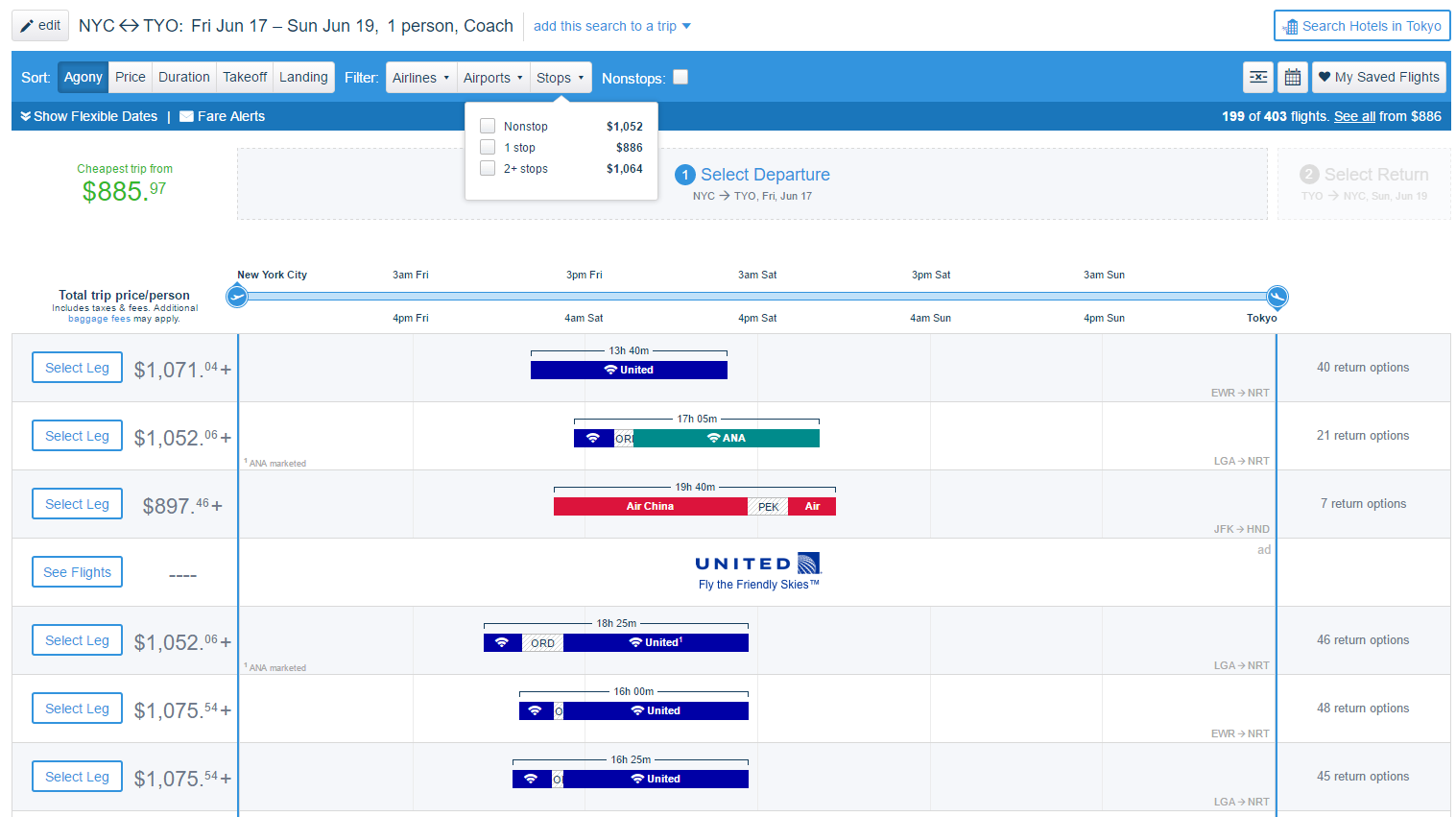 If your only requirement is to keep legs under 6 hours going from New York to Tokyo, I would say New York-Vancouver-Anchorage-Kamchatka-Tokyo, which is close to a straight line, but would not be cheap (not a lot of airlines competing on that Anchorage-Kamchatka route).

In general, I don't a website that lets you limit per-leg time, but Hipmunk (among others) lets you impose a total-time limit.

Not the answer you're looking for? Browse other questions tagged air-travel online-resources bookings or ask your own question.

8
Flight search by time in air?

12
Long transit in Cairo (Egypt)
11
How to book this complex multi carrier roundtrip flight I found on ITA?
17
What to do when no search engine can find a connection that clearly exists
18
what is the most advanced flight search engine besides Azuon and Matrix?
15
Does the term "leg" have a precise meaning in air-travel?
2
Why can't I book this specific combination of flights on Turkish Airlines?
8
Flight search for 3+/4+ stops
2
Why booking services never consider MIA for transfers?