Underwater pyramids off the Cinque Terre

Several years ago I was travelling around Italy and doing a bit of long distance cycling and swimming with a friend. One day we were swimming 2 or 3 miles along the coast of the Cinque Terre in Italy heading north from Riomaggiore, about 3-500m off the coast. The sea was sparking clean and underwater visibility seemed to be 1000m (probably not, but it was amazingly clear).

During the swim we both stopped after observing a series of underwater pyramids. It was honestly the most unexpected thing I've ever seen. The sea bed seemed to be some 20-30m below and was completely sandy without any growth. On it were a series of pyramids perhaps 3-5, but this is something like 8 years ago now. The sides of the pyramids had cut-outs so you could see through, but it was too far down to investigate.

After almost expecting lights to start flashing and then the sea bed to rise up into the sky, nothing happened and we continued our swim. After returning to the hotel I immediately went online to try and find out what these things were. Nothing. I was possibly thinking they might be there to encourage coral growth. Every so often when I remember the experience, I go online and do a search, but still haven't found anything.

From memory I draw a poor (un)artist's impression of what it looked like. Has anyone got any idea? 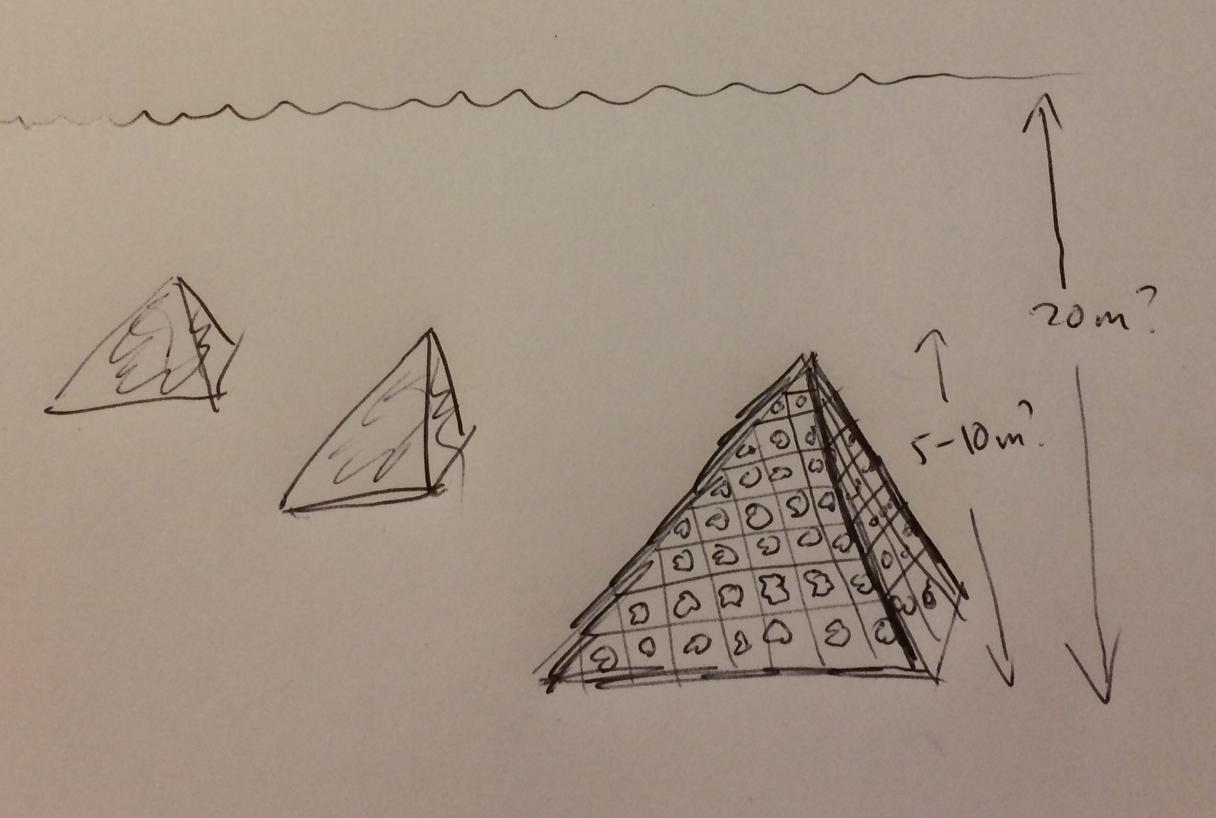 Just in case anyone thinks I'm making this up, I swear this is genuine.

This is only a guess of course but based on the circumstances you describe and your drawing, these might be artificial reefs (barriera artificiale in Italian).

These can come in a variety of forms including ships, tanks, cars, train cars and simple concrete structures. Here is a google images result of structures that are fairly similar to the one you have drawn. Some of these pics have humans next to them and from my guesses these structures are 1-6 meters tall.

Artificial reefs can have tons of different purposes (block ships from passing, prevent erosion, ...) but my best guess here is to serve as a habitat for marine life, given that Cinque Terre is a marine protected area.

Further support for my theory comes from this report (in Italian) from 2010 describing such measures of the beach of Corniglia (now I doubt you swam this far up, if so kudos) and similar structures might well be in place off Riomaggiore. It says the objects were submerged in a depth of 7-9 meters in sandy ground, to prevent erosion of the sandy beach and as a habitat for fish. They still leave 5-7 meters of water depth for ships/boats. They should also be marked in sea maps for boats but I can't find any such for the Cinque Terre right now.

Update: You specified having swum up all the way to Corniglia so it fits. This link you found actually shows the artificial reef structures on land and how they were submerged off the beach of Corniglia, while this video shows them underwater. From the pictures I guess 2-3 meters tall. Their purpose, given the report from 2010 might be more to prevent beach erosion than I thought, as there seems to be some strong seasonal currents taking away and filling up the sandy beach.
Here is a detailed documentation (in Italian, pictures included) of a similar project in Sicily.
The artificial reefs seem to be of this brand. 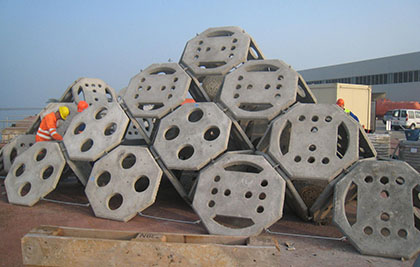 Not the answer you're looking for? Browse other questions tagged italy identify-this water-sports cinque-terre or ask your own question.

8
How to get from Genoa to Cinque Terre?
5
Kayaking Activities Off Phuket, Thailand
17
Evening landing (or take-off) pictured on photo
4
Does travel insurance have to cover the entire holiday?
10
Trains in the Cinque Terre
35
What is the name of this small town in Italy somewhere outside of Rome?
12
Where did the Hungarian PM travel to & take this picture?