Are there speed cameras on stretches of the Autobahn with a temporary speed limit?

Driving on the Autobahn one can often see a temporary speed limit: 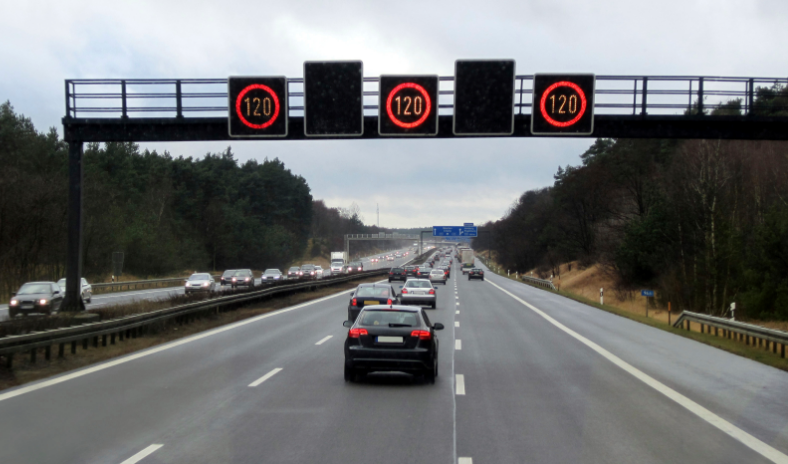 Are these limits actually enforced, either through a speed camera or by policemen carrying a radar?

(Source: I am German, have been driving in Germany for 25+ years, and had, altogether, 3 temporary driving bans of one month each for speeding)

Yes, these things are enforced.

A different answer says enforced in areas that are urbanised, substandard, accident-prone, or under construction, this is at least misleading. Those areas are more prone to having any speed limits at all, but if there are any, they are enforced, no matter the area.

Basically there are 3 (possibly 4) ways for enforcing them:

In both of these cases, you won't get pulled over, you'll be photographed for evidence purposes and get a ticket later. If you're a tourist and have a rented car, the ticket will go to the car rental company which will deduct it from your credit card.

More than 40 km/h over the limit (Autobahn and outside towns) or more than 30 km/h will mean a temporary ban of your drivers license. If you're a foreigner, they won't take your license, but you will still be forbidden from driving. Getting yourself caught again will be very expensive and may even give you some time in jail. Same if you get caugt more than 25 km/h over the limit twice in 12 months.

Between 20 and 30/40 over the limit, you'll get in a special database where some points are assigned depending on your speed (you get the same points for, for example, ignoring a red light); if you accumulate too many of them your license get temporarily suspended as well.

Less then 20 over the limit will cost you some money, but in normal cases, no further consequences. So if you're speeding, try to keep it below 20 km/h. Of course, if there is an accident, your speed will be held against you anyway.

The German Ministry of Transport has a website (in German) that lists costs in Euro, database points, and months of license ban. The first table is in towns, the second outside towns. Those are the fines for normal violations by normal cars; they are generally higher for trucks or in circumstances that are especially dangerous (dense fog, railway crossings, ...).

Devices that warn about radar controls are not permitted. Relevant law:

In English: Who drives a vehicle must not use, or possess in usable condition, a device that is intended to show or disturb traffic control measures. This is especially the case for devices that disturb or show velocity controls.

("Possess in usable condition" means "ready for use", this does apply to a device on your dashboard that's switched off, it does not apply to a device in it's original package in the trunk. Long ago, possession was banned as well, but as some EU countries do allow those devices, they had to make mere possession legal).

So, a device that actively monitors laser or radar waves and warns you is forbidden (75€, 4 points in the database mentioned earlier), and authorities will confiscate and destroy the device. A device that disturbs measurement will get you in even more trouble. A device that uses GPS to warn you about fixed radar controls is a bit of a grey area. If that is the only purpse of the device, it'll get confiscated as well. If your navigation device has a "point of interest" database listing radar controls, or you use a smartphone app, you'll typically get the fine, but keep the device. TomTom's Website claims "POI Software is allowed, but there's no case law yet", Navigon says "Some contries allow this, others don't, you have to get informed about the law in your country yourself". More information (in German): http://www.heise.de/autos/artikel/Blitzerwarner-im-Navi-Erlaubt-oder-nicht-1631522.html

As mere possession is legal, coyote sells in Germany as well; their website says the same thing about "your duty to comply with the law, not ours":

EDIT: I've rewritten my answer, especially to address the question about the variable speed limit.

These signs can show different speed limits, which is for example used as flow control. If there's much traffic or even a jam ahead, speed limit is reduced.

In general, these signs are as valid as their normal, printed counterpart.

Speed limits are of course enforced in Germany, though the fines are relatively low compared to other countries.

@Guntram Blohm has already shown some of them. But especially on the Autobahn, I know this ones on the A3 near Limburg: 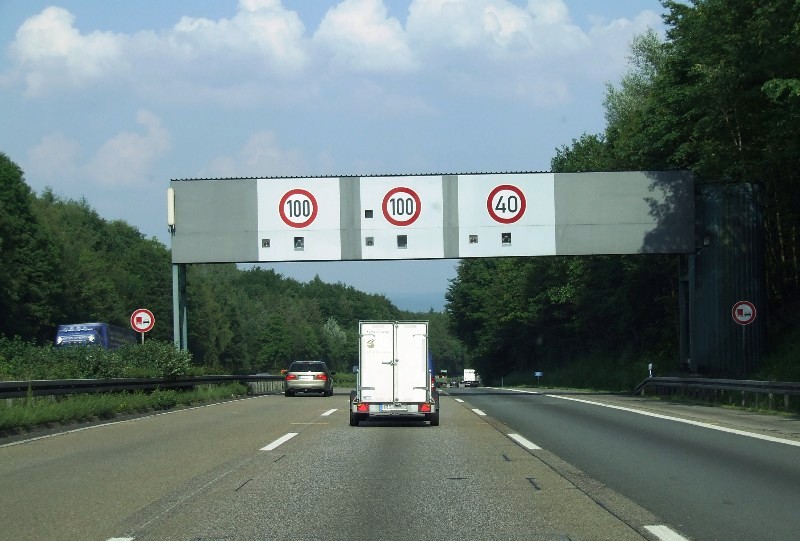 The speed limits signs were extraordinary large, and repeated three times or so. If you don't care, the last sign will make a photo ;-)

According to the site posted above, there are indeed some stationary speed cams, which adapt to the variable speed limit. The right column states the threshold for the trigger: 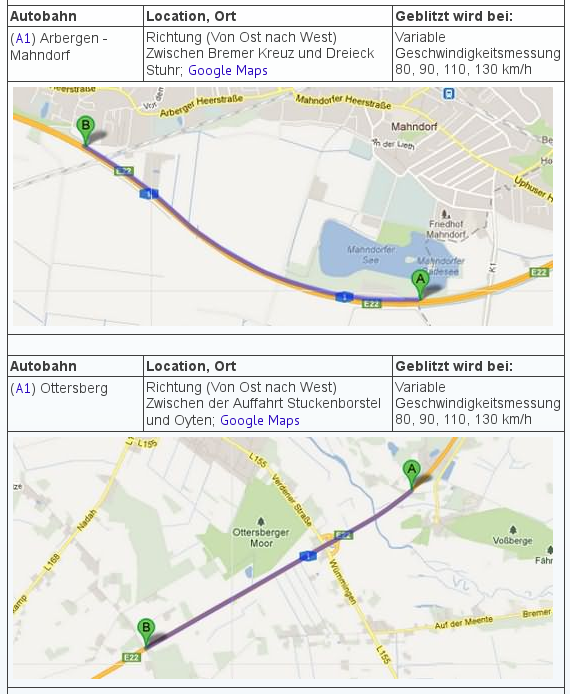 Of course, we have mobile cameras. They can be stand-alone devices, sometimes built into cars parking at the side of the street, or even trash bins (!)

A laser speed gun is often used by the police, but of course not on the autobahn. But they have civil cars (i.e. no police cars) with a video recording system, which is also calibrated for precise speed measurements. This videos are also conclusive when you go to court. 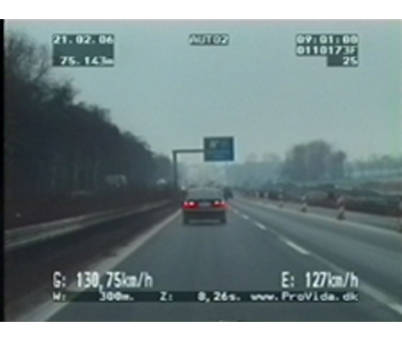 We don't have many of those cars, and they are more or less looking for the really bad guys, which drive waaay to fast or show other bad driving habits.

Just for completeness, and because of interest:

The Autobahn A1 crosses the Rhine in Leverkusen, and it turned out a few years ago, that the bridge is very ramshackle, and even can't be repaired. A new bridge will be build, but it's still in the planning phase. The existing bridge has a speed limit of 60km/h and is closed for vehicles of more than 3500kg. But since the detour is very long, many trucks ignored this. The bridge now has two cameras in each direction, one for speed, and one for weight...

Ah, and there are some pilot projects for cameras measuring the distance between vehicles on the autobahn, because it is often way too low.

Police will always stop and fine you directly. Any kind of speed camera is operated by the city, district or state, and you'll receive a letter from them, not the police.

As others have noted, these temporary speed limit signs are equally valid as permanent signs are. As such, when speeding and getting caught you face the same consequences as if there had been a fixed sign on the roadside.

However, I disagree with the other answers somewhat. Germany is very lenient when it comes to enforcing speed limits. It is not unheard of for speeding in an urban 30 km/h zone to only be enforced at speeds of 40 km/h onwards. (that’s over 30 % more!) I have heard various rules of thumb as to which faster speed is acceptable, and most boil down to a formula of:

Attempt that kind of speeding in other countries and you are in for big fines.

Another point is that — despite what many people perceive — speeding fines in Germany are rather low when compared to other European countries. If you are caught driving 140 km/h (measurement tolerances already deducted) on the motorway on a stretch where 120 km/h are allowed, your fine is merely 30 €.

The density of speed cameras varies greatly depending on the Bundesland you are in. Baden-Württemberg is on top of the ladder with over 1100 fixed cameras while Bavaria, despite being the largest state, only has 85. (Numbers from early 2015) The police ‘have better things to do’ in many areas rather than stand around and enforce speed limits. So altogether, there is a strong lenience towards speed limit enforcing.

This means, if the temporary speed limit is 120 km/h, most drivers will drive at 130 to 140 km/h, and even if the police do measure, this is unlikely to get enforced. Go with the flow and typically nothing will happen. If enforcement is present, they will be on the lookout for the blatant speeding outliers.

As pointed out by @sweber these signs are valid and this being Germany, yes the limits will be enforced.

I've been passing through one such stretch fairly frequently and while I have never seen mobile radars there, I have been warned of popular spots and have frequently heard the warnings on the radio. Also the vast majority of drivers really sticks to the speed limit (with German precision) in that area.

The system of temporary traffic controls is used for controlling the flow of traffic around peak hours (in theory, in reality always), alleviating traffic jams and avoiding accidents (i.e. slowing down traffic before hitting a jam / construction site / accident site).
In the aforementioned section there are cameras on poles throughout for monitoring traffic and most people do stick to the limits (within 10km/h at least), so I would be very surprised if there were no controls at all. In fact, if not knowing the place you should always expect mobile controls and drive within 10km/h of the limit). Police cars might try to catch you if you really exceed the limits as mentioned by @sweber (but personally I feel 30km/h over the limit might only trigger them on a bad day).

Finally, here is a map with permanent speed controls. Mobile ones are also announced on the radio (on most stations, in German, every full and half hour after the news) and there exist apps.

16
Are there online maps showing the speed limit on the German highways?

6
Speed limits for drivers with less than two years experience in Germany and Poland?
33
What does it mean to be in the fast lane in California?
11
Driving in Ireland and Northern Ireland
8
German autobahn speed limit
17
UK Motorway Slip Roads - Speed Limit
4
Inverted Speed Limit sign in South Korea
7
Germany speed limit „bei Nässe“ („by wetness“). Does snow count as wet?