Is the Berlin Wall Section on the Sakharov Grounds Accessible at Night?

I am informed that the only known section of the Berlin Wall situated in Russia is on the grounds of the Andrei Sakharov Center. The centre itself is composed of his former residence and a 'largish' park roughly 1/3 of a mile from Red Square.

As shown, this section of the wall is mounted outside of the centre: 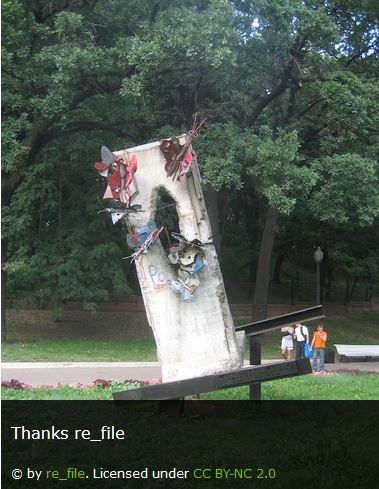 (Previous image taken out as it was replaces by spam on the host site.)

Question: Is this area of the park accessible at night?

Or alternatively, I am also aware that the centre has been facing some draconian measures laid down by the less tolerant regime in Russia. So if the grounds are open after the centre's closing time of 19:00, is a visitor likely to be challenged by the police for identification and questioning? I have no problems communicating and have all the necessary paperwork to meet any night time challenge by the authorities, but I will be on a tight schedule and would not have extra time for that kind of thing.

Finally, if I am questioned by the police is there an easy way to tell that it's not a scam by people impersonating the police?

Semi-related: How can I see the Berlin Wall? 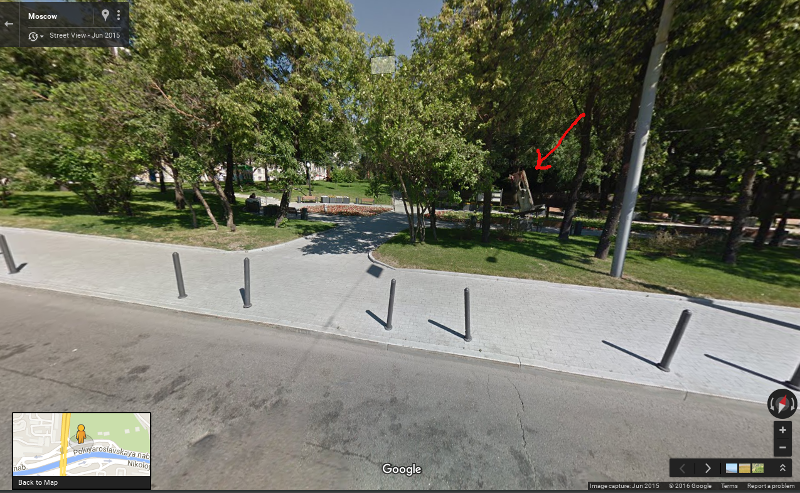 An aerial view of the location: 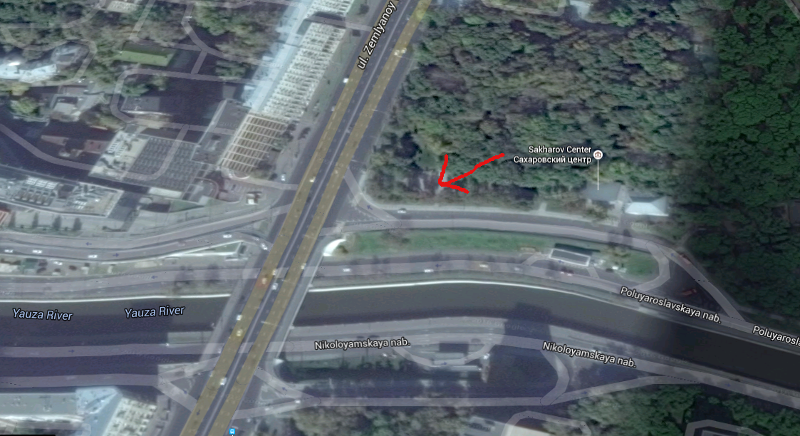 It can be seen that there is no gating or railings and the wall segment is on a public road with legal parking: 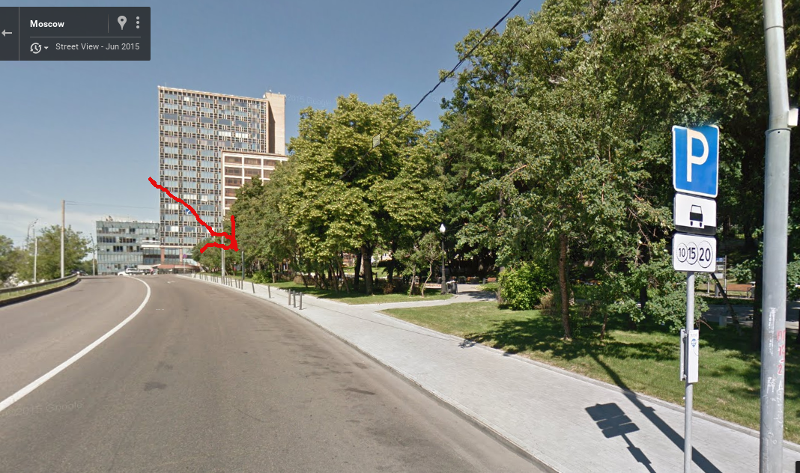 Question: Is this area of the park accessible at night?
[I]s a visitor likely to be challenged by the police for identification and questioning?

Update: I contacted the author of the spottedbylocals post below, who has visited the park, and she confirmed that the place is open 24 hours.

From the above pictures you can see that the wall section is accessible at all times and a short viewing at night would not be remarkable on a public path and would give no more cause for concern to the police than a visitor walking elsewhere in Moscow at night.

An article on the Sakharov park in the evening can be found here.

When evening falls, the area is illuminated with modern streetlights. But personally I’m fond of the squared clock which also becomes a lantern once it’s dark outside. Many people sit here, having a snack, or just talking.

With an image of what you might expect to see after dusk:

Since you won't be visiting the museum, you might like to take a virtual tour of the museum. Another view of the wall section is available on the tour: 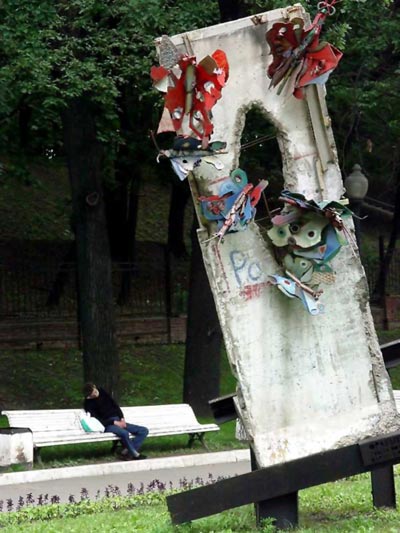 Finally, if I am questioned by the police is there an easy way to tell that it's not a scam by people impersonating the police?

A search for news articles relating to police impersonation in Moscow in particular and Russia in general does not show any cause for concern.

According to this article Russian police should carry one of these badges: 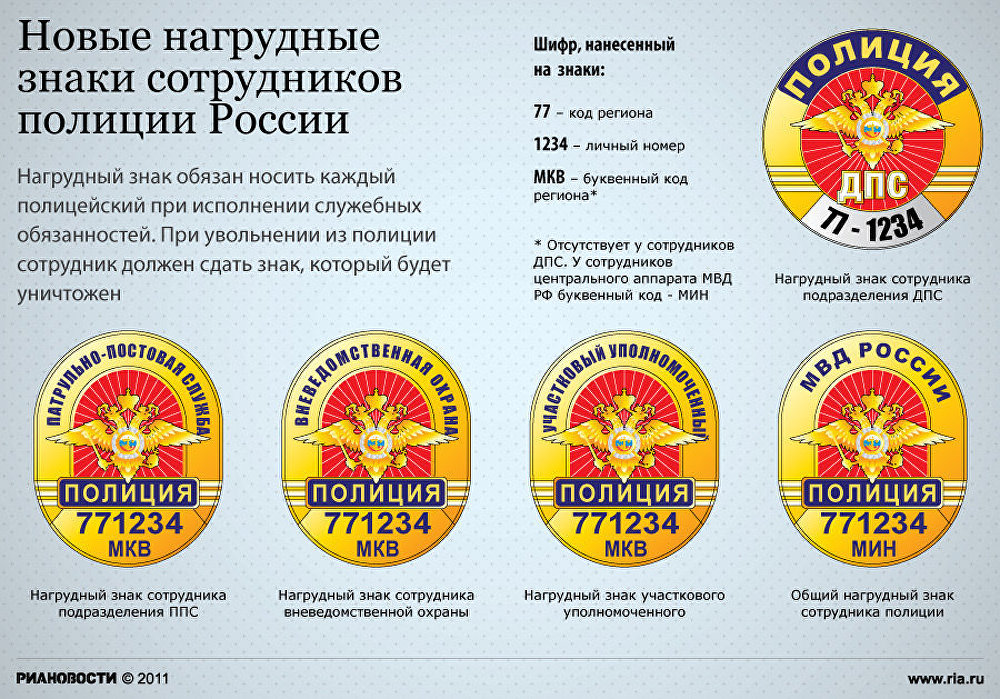 Should you still be concerned and you feel it is safe to make a phone call, a list of emergency numbers is available here. The Moscow city police number is (495) 200 9305

Finally, regarding the Foreign agent law crackdown, the fine against the Sakharov Center was recently cancelled.

The Moscow City Court has canceled a lower court's decision to fine the Moscow-based Sakharov Center for not complying with a controversial "foreign agents" law.

Not the answer you're looking for? Browse other questions tagged russia landmarks moscow scams parks-and-gardens or ask your own question.

19
The Great Wall of China: Where should I start a visit?
15
How can I see the Berlin Wall?
4
Is there any way to obtain tickets for the Taj Mahal night viewing without being in Agra?
5
I'm a Bulgarian citizen. Can I apply for a Russian visa in the embassy in Berlin?
6
Do the terminals of Sheremetyevo airport stay open over night?
16
How dangerous is the Jiankou section of The Great Wall of China?
44
Is it illegal to take a piece of the Berlin Wall?
7
Pre-booking a visit to the Reichstagsgebäude in Berlin