When is the best time to buy Euros based on the EU Referendum in the UK? [closed]

Ask Question
Asked 4 years, 2 months ago
Active 4 years, 1 month ago
Viewed 240 times
0
Closed. This question is off-topic. It is not currently accepting answers.

I need to get some Euros before going on holiday in early August.

With the EU Referendum coming up in the UK on 23rd June 2016, my question is, When is the best time to buy Euros? By best, I mean, when would I get the best exchange rates.

I'm looking for advice from sources such as travel companies and any non-biased government sources. I am not looking for biased or political opinions.

I will buy the Euros with GBP, some in cash, rest will go on a card. (Multi Currency Travel Card)

According to a couple of experts interviewed by the UK Telegraph:

Obviously relative growth rates are part of it, as that always drives the value of currency.

But in Europe it’s a different world. We’re talking about the next potential move for UK interest rates being upwards – we still think that is the case – whereas in the eurozone they have gone further into negative interest rates. So that gap is still significantly in favour of sterling, we feel.

...
In the run up to the referendum, we expect a continued weakness of the pound, but that doesn’t mean further drops at the magnitude we have already seen.

We asked a panel of experts without any vested interest in selling you currency, and the consensus was that buying some (but not all) of your holiday money now might be a wise move.

Historical graph for what it's worth: 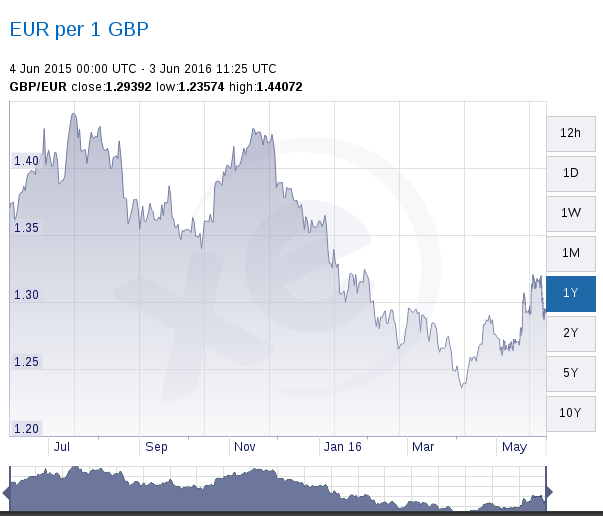 My conclusion? Nobody has the faintest idea...

If you think you can predicit it better than the experts, maybe it's time to change job.

I can't give financial advice or comment on the markets - for financial advice from people who know what they're talking about, try http://money.stackexchange.com and check what sort of currency speculation related questions they accept before posting - but in general if you need money to travel and the markets are unpredictable, you can reduce your risk by splitting the purchase.

For example, you could buy half now, then save buying the other half until after the referendum.

Or you could buy a third now, a third shortly after the referndum and a third closer to the time of travel.

The exact best configuration depends on your own personal weighing up of the amount in question, how big the risk is in terms of your own finances, and how inconvenient the hassle of changing money multiple times would be.

Update: hope you bought a good chunk of the money before the referendum...

Not the answer you're looking for? Browse other questions tagged uk europe money exchange eu or ask your own question.

42
What is the best method for exchanging dollars for Euros?
2
What's the best way to buy Swedish Kronas from Brazil
7
Preparing for Greece to Exit the EU (Grexit)
7
Best way to pay in Poland when I have Euros?
3
Can I pay for stuff in Euros in the UK?
0
Calculating the best exchange rate for a given currency based on direct conversion vs multiple currency conversion