Is frozen chicken widely available in and around Oslo, Norway? Is the price higher than other capitals like Stockholm?

I will be travelling to Norway next month. I was wondering about what is available to cook and eat in the supermarkets there. So specifically: are frozen chicken legs/breasts cheaper than other kinds of meat there?

I saw this link which prompted the question: http://www.thelocal.no/20140818/serial-chicken-smuggler-caught-in-norway

Plenty of chicken products are available for sale in Norway, as evidenced by one of the online stores: 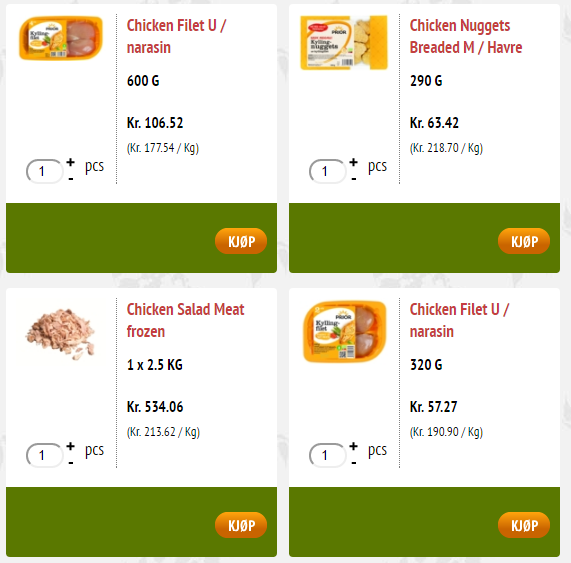 According to Numbeo, the price for a kilo of chicken is around 110 kroner, which is around 15EUR. So yes, it's quite a lot more expensive than in most other countries.

The smuggler wasn't trying to bring in a prohibited product, they were trying to avoid paying the extremely high import fees.

Just to add a bit of background and local knowledge to the answer above...

Food can be rather expensive in Norway. We lay too far north and are to rocky to make agriculture very profitable. We tend to have many small farms, rather than a few large ones. We have tariffs to protect our own farmers from outside import, we have taxes from the government, and we subsidise our farmers. Finally - partly because of our oil - both the cost of living and the cost on labor is high. We also tend to have very spread settlement, which add extra transport-costs. The production-cost, the labor required (eg. due to climate), the cost to pay the people working in various stages (from the farmer to the shop-cashier); adds up.

In Sweden food is somewhat cheaper - especially close to the Norwegian border... just to lure in Norwegians. Norwegian Crown (Krone - our currency) has also usually been stronger than the Swedish Crown. So Norwegians have traveled to the large shopping-mall just across the border; to buy bacon, roast, other meats - and alcohol and tobacco (which are additionally taxed in Norway for "social" reasons - ie. to make it so expensive that people will simply quit). We call this "Svenske-handel" (Sweden-shopping) or "Harry-handel" (Harry-shopping), and the travel itself for "Harry-tur" (Harry-trip/travel). "Harry" - to do something Harry - has become a Norwegian expression, which has pretty much ruined the popularity of the name in Norway (except for when it comes to a certain British boy-wizard)... I guess you could translate it to "Hillbillish" or something - eg. someone who drive to another state/country to buy cheap food and liqueur.

Anyway not only private citizens do this, but also criminals - as well as the occasional shop-owner, pizza-place-owner, fast-food-owner and restaurant-owners - occasionally smuggles cheap meat, alcohol or tobacco from Sweden or elsewhere in Europe to Norway. The margins - especially for restaurants and such - are very small, so some are tempted to cut costs by smuggling. The news-story you read, was such an example. And while they firm-up the suspension in the station-wagons they often use, so they can carry a heavy load without hugging the asphalt, few spring for proper refrigeration - so the meat are often more or less spoiled by the time it's sold.

So meats are available in all shops, including chicken - both fresh and frozen... it's just that it's rather expensive, so some buy it legally in Sweden for their own consumption... and a few smuggles it in large quantity to sell illegally to others. The reply above had prices, so to convert to Euro or British Pound you can divide the price in Krone by 10... to get in American Dollar, divide by 7 or 8... Also 1 kg is about 2 lb. So a little more than 1 lb of chicken-filet, costs £10 or $15 in Norway.

Not the answer you're looking for? Browse other questions tagged food-and-drink norway oslo or ask your own question.