Photography and Running in the Christiania Neighbourhood of Copenhagen

Christiania is a autonomous enclave situated in a former military base in Copenhagen.

At its entrance there is a sign which is presumably intended for tourists...

So what is actually illegal?

If the latter, is it OK to take photos of other aspects of Christiania, like the architecture? Which of these meanings should the well-intended tourist adhere to? More importantly, who would arrest the tourist if they photographed an illegal subject in Christiania?

Secondarily, there is an advisory against running, "Don't run - it causes panic" and in German "Please do not run, it generates panic". But there's no such rule against running in Copenhagen (that I'm aware of). What is special about Christiania that makes this rule necessary to the extent that tourists require a law/advisory?

Note: Since I took the photo outside of the "border" to Christiania, I assume that I was not in breach, but would welcome any well informed confirmation of this.

Note: Comments resolved the intent of the German text to mean "Please do not photograph - buying and selling hash remains illegal" (missing dash)

In the green light district there are 3 rules set by the community. Two of them seem strange and unusual, so they are given explanations.

The key is the implied part. They can't just write "please do not create evidence of illegal activity that's going on here". Because that's pretty much asking to disobey a law that requires you to report a criminal activity. Why break the law openly if you can just evade it?

Those rules are not law, they are community guidelines. The law is "selling hash is illegal". This law has to be coped with, hence the "no photos" guideline.

Your translation is incorrect- the German text says the same. It would be clearer if the dash after photographing would not be missing, but that is a minor error.

My understanding is that the real taboo of taking photos of anything related to drug dealing: vendors, customers, drugs, shops.

While the act of taking a photo is not "illegal" according to Danish law, Christiania is famously self-governing. There is serious potential to upset people who do not want themselves or their (illegal) dealings to be recorded (because it could lead to prosecution), and they may assault you, break your camera, etc.

Outside Pusher Street, photography is generally tolerated, but be polite and use common sense: ask people for permission, check with shop owners if it's OK, etc.

Likewise, the most likely reason for someone to run in Christiania is that the police are coming. Hence the prohibition: if some random tourist is sprinting to the toilets, others may think he is running from the cops and start running as well, and the dealers will not appreciate unnecessarily shutting up their shops.

I visited Christiana last year and took one of the tours with a local resident (I can recommend the tour by the way). The rules on the sign in question applies specifically to the "Green Light District," also known as the immediate area around "Pusher Street," where drugs are sold. There are a number of prominent "No Photos" signs at the entrances to this area. The sign also has a map in the lower left-hand corner indicating where the small Green Light District is situated within the larger Christiana area.

As I understand it, members of the Danish Police were entering Christiana undercover to take photos of the hash-sellers (who now wear ski masks, or they did last year anyway) as part of periodic crackdowns on the drug trade. Prohibiting photos helps protect everyone's anonymity. Running in the Green Light District is prohibited for the same reason: people have been known to run from the police there, and so if one person starts running, others may assume the police are present and start running too, creating a panic. In short, the rules, which are community norms, not laws, boil down to: "hey there's drugs around, everyone be cool."

Our guide made it clear that photos and/or running were not allowed in this specific area, but were fine anywhere else, though the usual street photography etiquette applies, as some locals may not like their picture taken. Looking back through my pictures, I see a number of instances of kids running around and adults riding bikes outside of the Green Light District without incident. Photographs elsewhere in Christiana of the architecture or local transportation are perfectly acceptable: 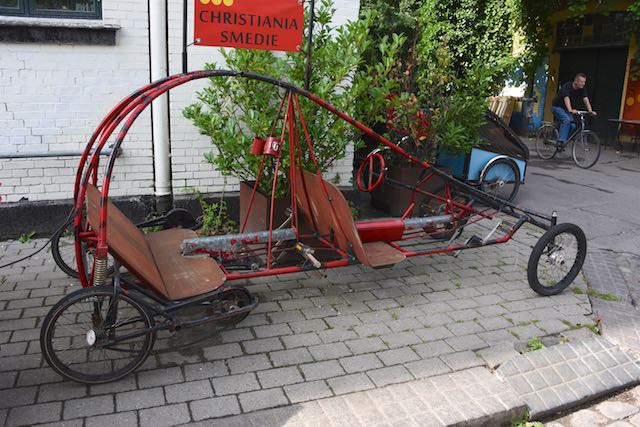 I can't imagine that you did anything wrong by simply taking a picture of this sign, which I believe is set back somewhat from the actual district. I, in fact, have my own picture of the same sign, and nobody objected: 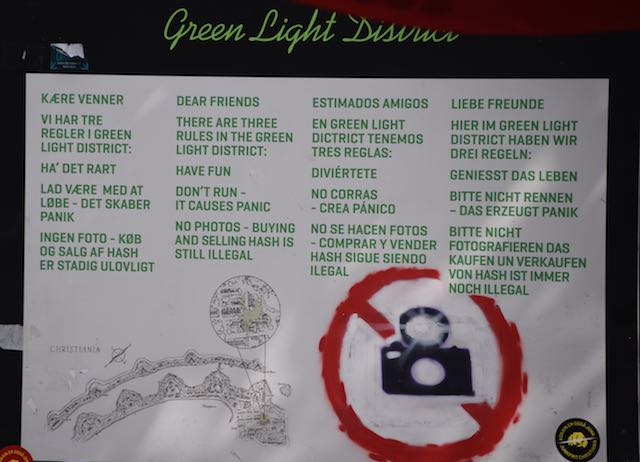 Not the answer you're looking for? Browse other questions tagged legal local-customs drugs copenhagen or ask your own question.

3
Where from can I catch the copenhagen zoo snake bus?
12
Why are there plastic bags at the back of seats on Copenhagen local trains?
3
Dual US/NL citizen traveling to Edinburgh and Copenhagen
3
Is it possible to use the Mobilklippekort in Copenhagen as a group ticket?
2
What are the Copenhagen Card conditions?
1
Transport from Copenhagen bus station to the cruise ship port
4
How did Malmö and Copenhagen connect before the Öresund Bridge?
4
Park and Ride in Copenhagen