We're all adults here - how to use a squat toilet if you have trouble squatting?

So, we have a great question and answer on how to use a squat toilet. However, the answers there basically assume you're healthy and able to use one as per the instructions.

A group of us are going to an area with squats next month, and one of the group is currently undergoing treatment for their lower back and post other surgery have a lot of weakened core muscles, finding squatting difficult.

If you're unable to squat, how does one use said squatting toilets?

For a very short period after my family moved back from the UK to my home country, and while my grandmother was still alive, we used to spend time at her (my father's ancestral) home, which until we refitted it, still used a squatting toilet.

Being a bit on the chubby side and totally unprepared from such a thing in general, I found great trouble using them effectively. Here are some tips that helped me:

You could buy a portable camping commode and not use the bag. Here's one for sale on Amazon: http://www.amazon.com/exec/obidos/ASIN/B000CN9CN6 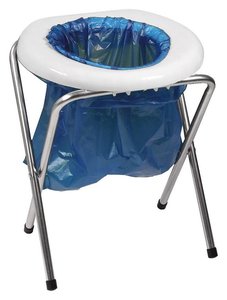 Buy a plastic chair with four legs. Make a hole in the centre. Place it over the squat toilet. Be careful not to fall in. You are good to go. The plastic molded chair is widely available. Buy one with short legs or cut the legs off to shorten them. The chair is exactly the same width as a squat toilet width.

A friend of mine had a knee operation in May three years running and had to wear a cast on the leg till well into September.

One place she visited in those three summers was Taizé France, where most of the toilets were squat toilets. The porceline square with steps a bit higher than the main square.
While there were 'sit' toilets those were always a lot longer to walk, more popular so longer queues and often less clean.

So she worked out to use the squat toilets when standing up. Take good leg out of shorts and undies, (those can stay on leg with cast if they can be held out of the way.
Stand over the squat toilet with the legs as wide apart as the cubicle allows (so on the outside of the toilet square) and let all run that needs running.
With the cast on the leg she was not able to bend that leg at all. She did aim as good as possible by bending the other knee.

The flush did take care of the poorly landed bits when needed, she said.

As a male you can do at least half standing up just aiming down anyway, so it is 'just' the other half you have to be creative.

Not the answer you're looking for? Browse other questions tagged health hygiene or ask your own question.