Following in the Footsteps of Hemingway in Italy

History tells us that the author Ernest Hemingway was stationed in Italy during World War I. He was billeted in the town of Villa Ca Erizzo Luca where he drove an ambulance collecting human remains. In 1918 he was seriously injured and sent to the town of Bassano del Grappa to recover. And it was there that he wrote a seminal masterpiece "A Farewell to Arms"... 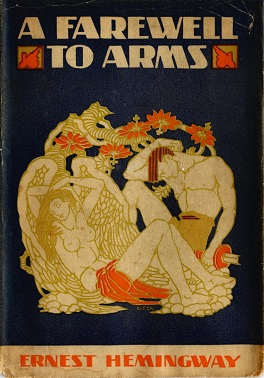 Source: By Ernest Hemingway
Derived from a digital capture (photo/scan) of the book cover (creator of this digital version is irrelevant as the copyright in all equivalent images is still held by the same party). Copyright held by the publisher or the artist. Claimed as fair use regardless. Manhattan Rare Book Company, fair use

The novel is thought to be semi-autobiographical and includes lots of detail about locations in northern Italy. I would like to visit some of those places as a sort of makeshift 'Hemingway Pilgrimage'.

There's the Hemingway Museum in Bassano del Grappa (in fact the town was renamed as an homage to Hemingway), which looks like a great place to start. This museum is described in admirable detail in an article by Military Historian Karin Martinez.

Question: Leaving Bassano del Grappa and heading into the hills where the fighting was the most intense, are there any other mementos honouring Hemingway? Roadside plaques? Small monuments that mention Hemingway? Or streets named after him (but not the one in Bassano del Grappa). Or alternatively, is there an organized Hemingway pilgrimage that follows "A Farewell to Arms" that I could join?

Secondarily: My path may take me near the city of Montebelluna. Do they have an outlet where I could get a great pair of hiking shoes? It's not about shopping per se, it's about the presence/absence of a little known outlet available to the public.

Several outdoor gear manufacturers have outlets right in Montebelluna. The Salewa Store is on via Feltrina Sud 154A. Orizo Factory Outlet is at via Feltrina Nuova 49. The links take you to the scarpe/shoes, per the question, but both offer lots of other options.

Not the answer you're looking for? Browse other questions tagged italy history pilgrimages or ask your own question.

6
Is the couvert mandatory or optional in Italy?
13
Recreating Hemingway's Trip to Pamplona (Part 1)
10
Following in the footsteps of Jason Bourne
4
Schengen eligibility following a removal and visa cancellation
8
What is the most well-preserved ancient ruin in Sardinia?
6
What is the abbreviation standard that the U.S. Customs and Border Protection's travel history is following for the locations?