In the UK, what is the difference between "Leave to Enter" and a visa?

In most countries that I have traveled to, a visa is a document / attestation that allows you to travel to the country's borders in order to request temporary entry, because you are not normally entitled to enter the country.

The visa may state the nature and purpose of your visit (for example, F1 is a student visa in the US) or it may not (for example, my Schengen visa just states "Schengen Visa" type "C").

Visas usually also have a validity period and sometimes contain other restrictions (for example, my Saudi visit visa only allows one entry, the Schengen visa allows multiple entries).

However, for the UK it seems things are a bit different. According to Wikipedia:

Leave to Enter is the technical term for someone granted entry to the United Kingdom by British immigration officers.

Is this a separate document / stamp? How is it related to the visa (if one needs to apply for to begin with).

Also, curiously, why is called "Leave to Enter" - "leave" where? Presumably you are already "in" the UK when you get this permission?

Nevermind, @fkraiem explained that one.

The word "leave" is here used in the slightly archaic sense of "permission".

Leave to enter is what a third-state visa-free national gets from an immigration official when he is allowed to pass through the immigration control line into the UK. It usually takes the form of an ink stamp in the passport, showing the date of entry plus conditions for the stay (such as no work and how long the stay can be): 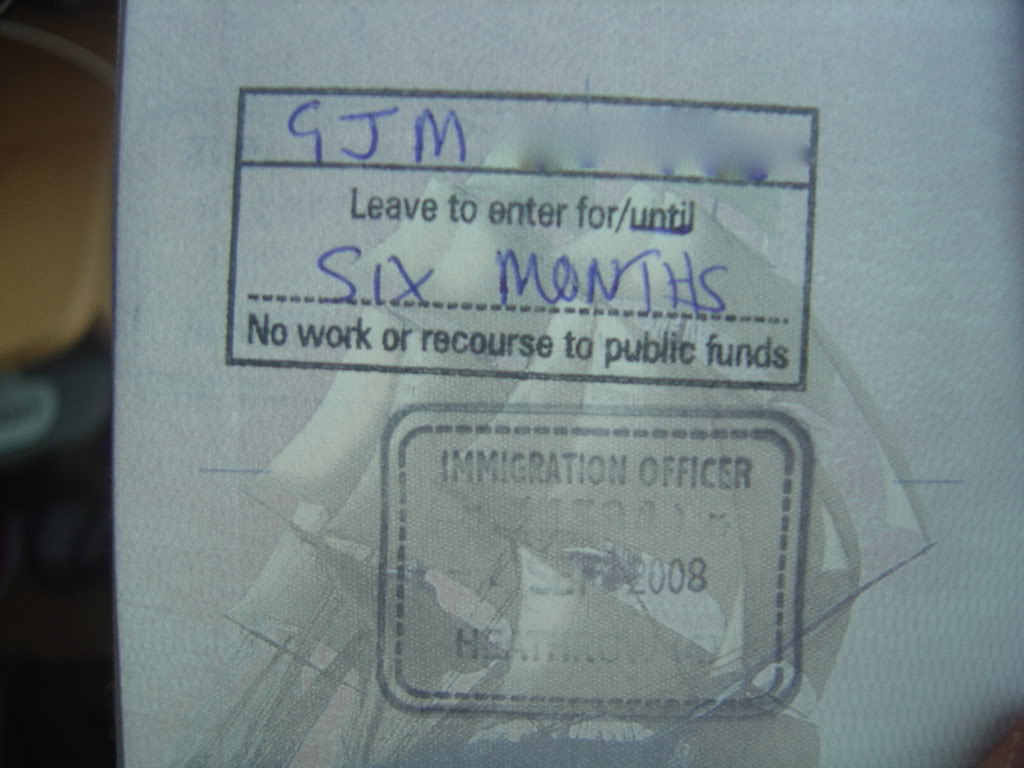 (Citizens of EU/EEA states are not formally given leave to enter, but are instead "admitted" under the EEA regulations; this admission is equivalent to a leave-to-enter for many purposes).

Where the UK differs from many other countries is the phrasing it uses for visas. The formal term for a visa that appears in many (but not all) legal contexts is entry clearance; visa applications are processed by "entry clearance officers" and so forth. The UK government tends to use the word "visa" in communication that targets the traveling public, though.

Entry clearances are issued in the form of a passport sticker.

Entry clearance is not exactly the same as a visa, in that it can be applied for (and issued to) non-visa nationals even for short visits where the traveler could just have sought leave to enter at the border. In that case the entry clearance tells the immigration officer at the border that the traveler's documentation has already been found to check out by an ECO, which allows for a much abbreviated landing interview (basically just verifying the traveler's identity) and less uncertainty for a traveler who might otherwise be rejected.

Thus, in contrast to, say, US or Schengen visas, a UK entry clearance constitutes an actual permission to enter that border guards are only supposed to override if they positively smell a fish.

The terms 'entry clearance', 'entry certificate', 'leave to enter' and 'leave to remain' are defined in the Immigration Act 1971.

There is lots of information at gov.uk: Entry clearance basics, Immigration rules part 1.

Not the answer you're looking for? Browse other questions tagged visas uk terminology or ask your own question.

1
What are the material differences, UK visitor visa vs USA visitor visa
2
Partner of short term student, applied for Luxembourg citizenship - should she mention it in the landing interview at the UK border (visitor visa)?

8
Schengen Visa : What does the information mean?
6
Can a dual citizen with a Schengen residence permit enter the Schengen area on their second passport?
4
Enter Ireland as non-visa national and proceed to UK - what is the allowed duration of stay?
47
What is meant by "personal impact and articulation skills" in the context of border entry?
1
Leave and re-enter Belgium with temporary residence card + void passport + passport of another country?
1
Re-entering the UK on a visitor visa
3
Exit and re-enter Schengen area if country that issued the visa is the final destination
1
Reentering the Schengen space with a single-entry long stay D national visa and permit of stay
3
I have an "assistant de langue/lecteur" visa for France. Can I go to the UK within the 3-month OFII validation period without the *attestation*?
12
Can one enter Shenzhen from Hong Kong with a Special Economic Zone visa despite having a non-fully utilized, still valid Chinese L (tourist) visa?