Can I take an AVR development board on a plane?

I'm travelling to the UK and while I'm away, I have a university assignment due, and I'm concerned that I might not be able to get it finished before I leave, and would therefore need to work on it while travelling.

The problem is that the assignment requires a development kit that might appear at first glance to be something else: 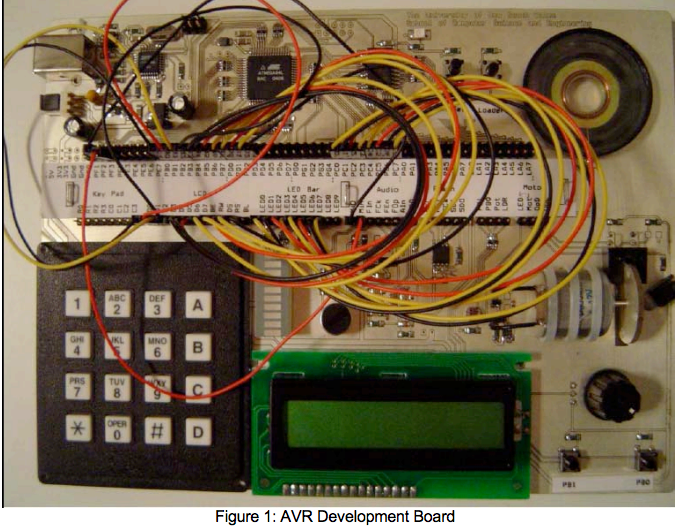 I will be passing through Sydney, Abu Dhabi & Heathrow airports. Would I have any issues taking this AVR board in my checked baggage? What about carry-on?

The TSA guide says that "Realistic Replicas of Explosives" are not allowed, and yours kind of qualifies. Of course it lacks a critical component, namely an accelerant and/or explosive, but good luck convincing airport authorities anywhere in the world.

The best thing that comes to mind is to disassemble partly the components, particularly the analog ones -- keypad and cabling, mostly (hopefully not everything is soldered) and pack them separately. The rest would look much more like a harmless circuit board, and you can transport those without anyone making a fuss about it (I've done this previously with various hardware components both in my checked and hand baggage).

If that's not possible, then you should contact the airport security in advance and explain your situation. If you are forward about it with and show them and explain what you are carrying, you should be fine. Security personnel would probably want to look at it with bare eyes, so make sure it's easily unpackable.

Got a somewhat related anecdote as well: some 20 years ago, my mother travelled from Moscow on a business visit and had bought me a toy -- a fairly large moon lander, equipped with faux antennas, lamps, and "remote" controls with cables. She packed without much thinking in her handbaggage, but without the box. At the security scan at the airport, the security personnel became visibly agitated and reached for their guns until my scared to death mother showed them what the bulky box with doubly suspicious antennas and cables really was.

As a flight attendant before, If I see something like this onboard I have to report it IMMEDIATELY. I have seen a lot of cases while queuing at security checks before, Even if the security personnel is 100% positive about the device he/she has to report it to senior personnel so he/she can get rid of the responsibility and throw it to someone else. The problem with these kind of things similar to your device its not easy to determine if its something bad or not. They will need an expert and that expert may or may not be available (most likely not available) so you will end up either being refused to get onboard and getting asked 1000 questions.. or getting your device confiscated. specially you will go through three different security systems! Even if you passed one of them, you wont be able to pass the rest.

Solution:
As @Phoenix mentioned in his comment, Shipping it to yourself is the best you can do, Major shipping companies have their own cargo planes fleet and always have Dangerous Goods experts available to rule out things. So the process is much easier since no airport security nor passengers involved.

I asked a friend about this (he does Arduino work and travels between New Zealand and the US). He said that he personally hasn't had any trouble with packing electronic stuff in carryon luggage.

However, he also pointed to this blog entry: http://grathio.com/2012/04/flying-with-homemade-electronics/ which advocates packing everything in neatly organised and labelled boxes, with a friendly note to the baggage inspector. May be a bit over the top, but it probably can't hurt.

Anecdotally, I have carried small development systems in my checked luggage a number of times (the most recently just last month, to China and back) and have had zero issues. I don't think a proper development board (without all those loose wires and maybe without the motor) looks much different than the innards of a normal electronic gadget to an X-ray.

I suggest you try to avoid the "Rube-Goldberg" appearance and pack the loose bits and wires separately in a poly bag and I think you'll be fine -take the motor off and pack some spare wire ties to re-attach it. DO NOT pack batteries in your checked luggage (don't bring them at all, if possible) and take care about things like motors and certain optical components that tend attract attention because the screening people can't see exactly what they are.

On the other hand, I suggest that if your intention is to get some development work done during your flight- that would be rather "unwise".

I've had stranger things both in checked and carry-on luggage without any problems, at least on flights within Europe. Usually, you are required to show that electronic equipment is working, e.g. turn on a laptop or take a picture with a digital camera. For disassembled or electronic parts with non-obvious functionality, the security officers often do a swab test for explosives.

On the other hand, security checks of carry-on luggage tend to be very random and the border between acceptable and non-acceptable items obviously depends highly on the moon phase or the security officer's current mood. A few months ago, I was refused to bring a package of butter in my carry-on luggage, with the explanation that it may melt and as every passenger should know, liquids are forbidden. On the other hand, I've never been denied to bring knitting needles or heavy glassware in the carry-on luggage.

Since it is really impossible to predict what is allowed and what is not, I eventually have started to avoid anything "could-be-slightly-suspicious" in my hand luggage. If I still do, I also read a suggestion somewhere else to bring a self-addressed and stamped envelope. If security officers refuse you to bring specific items on board, they are said to be decent enough to allow you to deposit the items in an addressed and stamped wrapping (of some kind) and post it for you.

In my experience, there was no problem.

I came to this page before traveling. Now writing after having my own experience.

Hardware will be recognised very easily during check in scan. So be ready with a proper explanation without any hesitation. As per other peoples advice I've labelled all my boxes and sealed them with tape.

The person did ask me the use and purpose of it, so I provided them with proper reasons for having all this stuff - batteries, microcontroller board, WiFi board, BT module, RF module load cell-which looked like bomb fuse.

Within 5 minutes I was on my way to check-in.

It was all in check-in baggage. Don't know whether they will allow it in Cabin baggage.

30
DIY computer in hand luggage - what to expect on security checks?
6
Can I take my disassembled desktop computer on a flight from Turkey to the UK? (some new regulations)
2
Electrical Components in Checked In luggage