Are there online tools to search for journeys requiring various means of transportation?

I have to book a journey involving a connection between a plane and a boat. For the sake of the example let's say I have to go from Milan to Stromboli. This journey requires coordinating a plane, a taxi and a ferry. Obviously I could do this manually by looking at landing times and boat departure times, factoring in the time it takes to go from the airport to the harbour.

Are there any online tools which would allow me to check for possible routes, including calculating connection times, covering journeys on different means of transportation? Ideally I would also like to be able to book the journey.

To clarify i know about Rome2Rio and I use it to check all the possible combinations to get from a to b. However it doesn't take into account departure timings, and it doesn't factor in connection times. It "just" tells you what means of transportation are available. In that Milan to Stromboli example I know there's one ferry per day. So the flight must take this into account. Plus one must also consider transferring from the airport to the harbor. Rome2rio tells me it can be done. It doesn't give specifics in terms of which plane to get, at what time, etc. It does link to booking/airline sites though.

adding to the excellent list by @Willeke also directions of google maps can be worth a try. It does also calculate itineraries for specific times of travel. Their selection of means of transport isn't as good though (they are missing some metro lines in some city for example) and in your example it fails:

Sorry, we could not calculate transit directions from "Metropolitan City of Milan" to "Stromboli"

Rome2Rio instead produces a set of different solutions, including plane, train, ferry and driving. For the last 2km to the mountain the solution always is "?" which means either walking or trying to find a local taxi I guess. 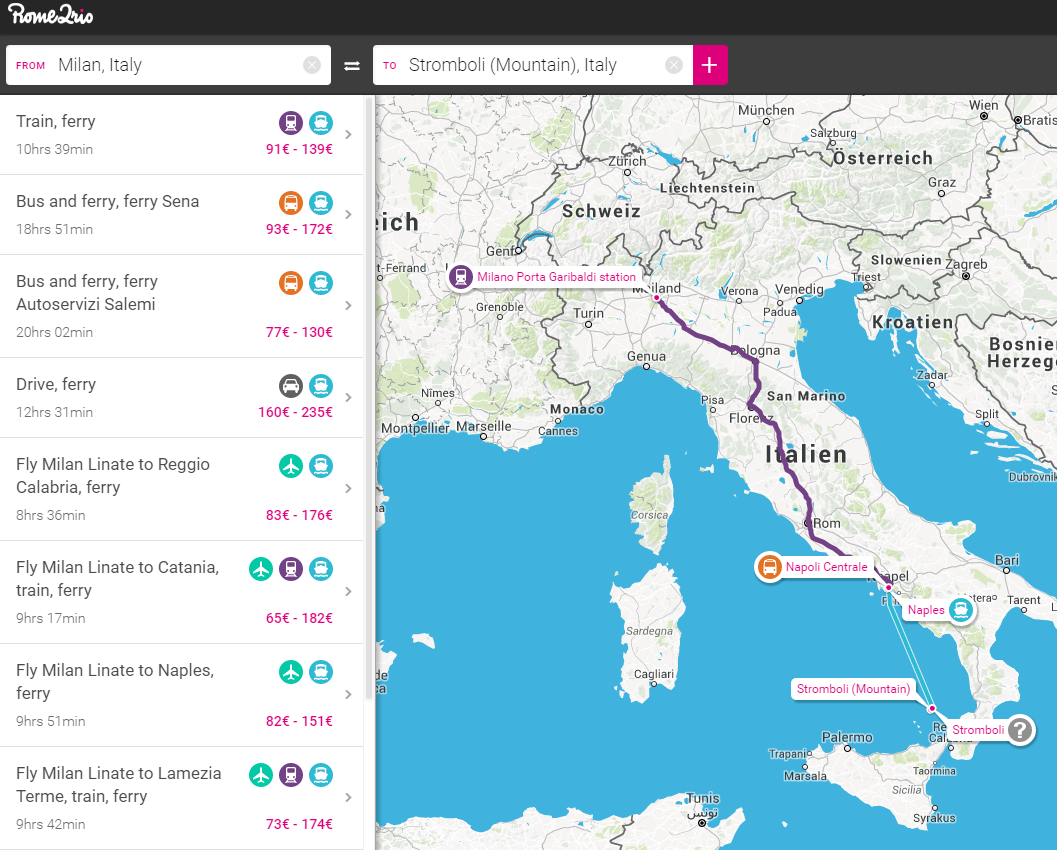 The downside of Rome2Rio is that the search is not time-specific, i.e. it will give you the cheapest (by range of typical prices) / fastest solution in general but not for a specific date and/or time. Once you pick a specific solution it will direct you to a schedules/booking page where you can find prices for the day you want to travel (and specify), but you there you have already chosen your itinerary and you still have to book all segments of your travel separately plus prices on Rome2Rio are only an approximate range of what you pay in the end. 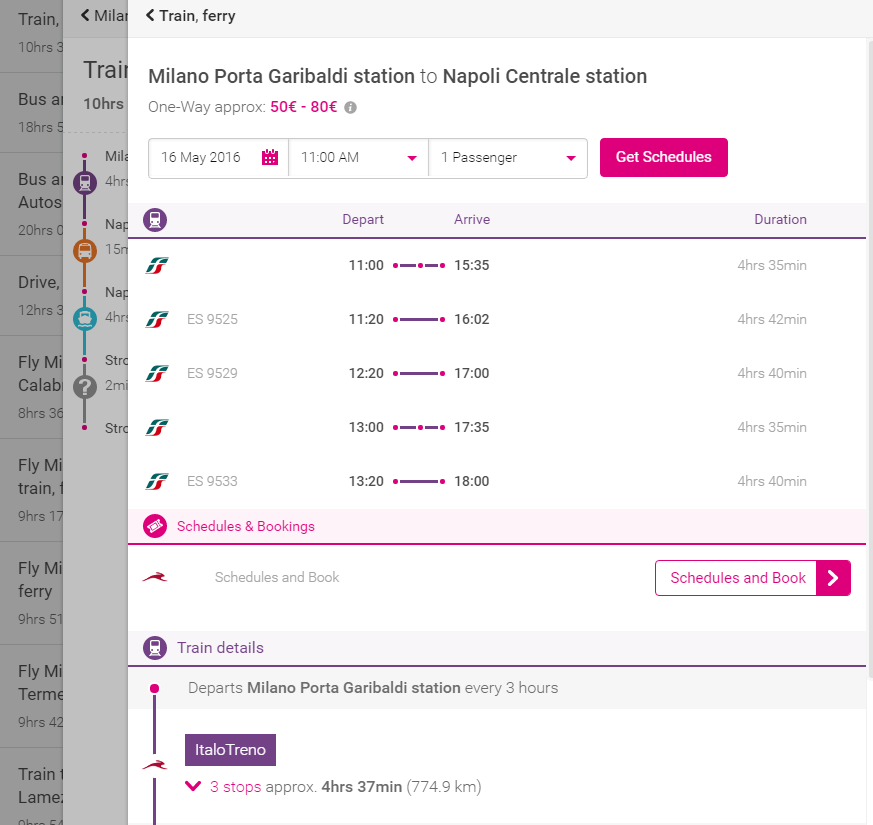 So Rome2Rio in the end is best used as a tool to figure out possible solutions, booking for specific dates and finding the best (i.e. cheapest/fastest) solution for e.g. departing in the evening still requires some manual work. If it gets complicated and you are in much doubt, a travel agent might be worth it.

Besides Rome2Rio, which works internationally, I know several 'one country only' versions who do or might not do ferries.

OV9292 (link in English) is the Dutch one, designed and started before internet searches became easy and named after its phone number, (which still works but has become expensive.)
It claims to do all 'within the Netherlands' travel by public transport. It may not give connections that require taxis but will do all where a cheaper option or a longish walk is an option. And you can set it for the maximum walking distance.
The main car club for the Netherlands, ANWB, has an alternative version, I have not found an English language version yet.

Traveline is the UK one, it has several more local versions as well, an internet search will find those for you. Again you can set it for different options.

Bahn, the German railway planner does many more options for travel within the country borders, it may not include coach options.
This site has many language options and mostly they work well. From comment by @neo: There is a second one site for travel in Germany, Qixxit.(Link to their English version.)

This list shows only the countries I have had the need for a local transport planner, so you might well find one for your need in the country you are looking for.
It is not sure all countries you need have a site like that, as they do rely on the information being published by all public transport suppliers, which not all do.
Airport websites often include links or general information for travel to the nearest public transport or main city.

I do not have more planners that do work for a wider area, ie more countries.

An Internet search for Italy does not come up with a combined public transport site. The results even indicate that there are still bus companies that do not have websites and do not publish any of their times online.

Google maps is often a good alternative, if mostly less so than a good public transport site, but if the information is not available online, Google can not find it either.

Not the answer you're looking for? Browse other questions tagged air-travel public-transport online-resources airport-transfer ferries or ask your own question.