Why did my flights make unscheduled fuel stops?

On 2 occasions about 20 years ago my trans-Atlantic flights made unscheduled fuel stops. Once from NY to Europe (Geneva IIRC), it stopped in Shannon, Ireland and once from Europe (Brussels IIRC) to NY it stopped in Bangor, Maine. On both occasions they announced that there would be no disembarking allowed during the stop.

I've always wondered... why would they not load the plane with enough fuel in the first place to make it to the destination? Doesn't the airline have to pay a lot just for landing fees so that they would want to avoid an unscheduled stop? I always wondered that perhaps there was something else going on besides needing fuel. Anyone with knowledge of this?

There's a nice piece talking about this in the Wall Street Journal. 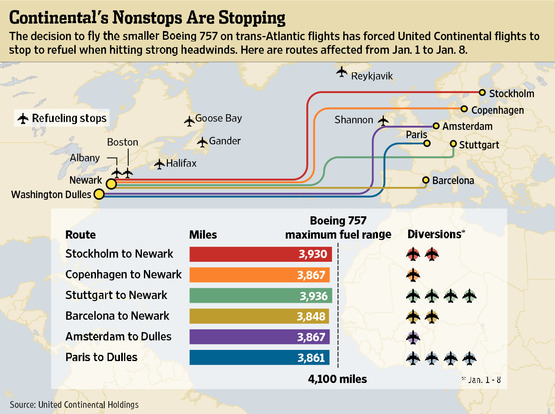 Essentially, airlines try to take the minimum safe amount of fuel when they fly, based on expected course, direction, typical wind values and circling time at the destination.

This allows them to save cost in not having to lift the extra weight in fuel (it adds up when you're flying thousands of miles!).

However, every so often, you get unexpected, unusually strong headwinds. This may not even be unexpected - they may have gone around a storm to avoid turbulence, into a known heavy wind area. As a result, they use up more than normal fuel, and may require a stop.

Similarly, more recently than your 20 years ago flight, with companies like Continental and United, who are trying to use the 757s to near the edge of their full-tank range (so they're not even trying to cut corners) run into stronger than expected wind - especially this year there was quite a spate of it (thus the WSJ article) and so have to stop in places like Ireland, or even Nova Scotia.

I think it depends what you mean by "unscheduled".

These days airlines usually have a very good idea of how much fuel will be needed for a particular flight, given the load of the aircraft, weather, prevailing winds, expected delays, and so on. However, as these factors vary from day to day, it may sometimes happen that the required amount of fuel is more than the plane is able to carry. The limit is usually not the capacity of the fuel tank, but rather the weight of the fully loaded and fueled plane.

If this happens, an extra stop will be planned. Normally this would be known well in advance of takeoff and included as part of the flight plan, and announced to the passengers ahead of time. (The one time this happened to me, about a year ago, they announced it at the gate, and estimated how much it would delay our arrival.) The usual term for this is a "tech stop".

Of course if this happens a lot on a particular route, the airline would probably want to switch the route to a different type of aircraft with a longer range, if they can. But it may be that the airline doesn't have such an aircraft, or they are needed for other routes, or for some other reason it wouldn't be cost-effective. But the occasional tech stop would probably be taken in stride.

The other possibility is that the flight takes off expecting to be able to reach its destination without a stop, but along the way the pilots discover that they will need to land somewhere else due to having used more fuel than expected. Such an unplanned landing is called a "diversion". This should be much more rare, as fuel planning is usually quite accurate and includes a sufficient buffer to account for the unexpected. Diversions happen more often when weather at the destination airport degrades to the point where a safe landing is not possible.

Another anecdotal story to contribute to other answers - my mother was taking a transatlantic flight a couple of years ago, and the departure was delayed for whatever reason.

She was flying Air Canada to Toronto, the scheduled flight was ~10 hours, and the delay was 4 hours. Apparently, in Canada it is forbidden for a pilot to stay on the job for more than 12 hours. They landed in Nova Scotia, and there was a replacement crew waiting for them there.

So its not just winds and fuel, its also the labor laws that can contribute to that as well.

If it is "too far" between origin and destination on a particular route, planes may make scheduled "technical stops" in between for refueling.

What does a technical stop mean in air travel?

There are times when unexpected contingencies (weather, crowding, etc.) make the destination "too far" for the plane's fuel supply (even though this usually isn't the case). In such cases, a plane may need to make an UNSCHEDULED "technical stop" for refueling.

Such stops are "inconvenient." But far preferable to the alternative.

Also, if the aircraft is changed for a smaller one (the airlines company needs to operate the original aircraft on a different destination) then regulations require a fuel-stop according to the type of aircraft and amount of passengers. But this information will never be revealed to passengers.

23
What does a technical stop mean in air travel?

1
Why don't more flights offer under-carriage cameras?
8
Why did the stewardess make me wait before disembarking?
10
Why did the crew spray the cabin before take off?
50
Why did airport security swab my hands with wet paper?
1
Why is the airline fuel fee a tax?
20
Why is Lufthansa cancelling flights to India?
6
Why are fifth freedom flights more often discounted than regular flights?