Refugee in France; can I apply for a US tourist visa with a titre de voyage?

I am a refugee in France with a residence permit and a titre de voyage (refugee travel document). I want to visit the United States as a tourist. Will my documents be sufficient to be issued a tourist visa for the USA?

Your travel document is fine to submit instead of a passport. That is the whole point of the document, after all. The US will accept it as such.

The definition of "passport" in United States law includes any travel document issued by a foreign government or international organization, whether it has the word "passport" printed on it or not. The controlling factors are that it must identify the traveler and be valid for the traveler to return to the country which issued it.

(30) The term “passport” means any travel document issued by competent authority showing the bearer’s origin, identity, and nationality if any, which is valid for the admission of the bearer into a foreign country.

This is interpreted by the State Department in accordance with the Foreign Affairs Manual, which states in relevant part:

a. The term competent authority as used in INA 101(a)(30) means an official who is duly authorized to issue passports by the government of the country of issuance. The term is not linked with the maintenance of diplomatic relations with, or recognition by, the United States. Accordingly, the Department will determine, on a case-by-case basis, whether a passport-issuing authority is a competent authority within the meaning of INA 101(a)(30).

It goes on to state cases in which the visa may be placed in the travel document, or must be issued on a separate sheet of paper. (For instance, North Korean citizens get their US visas on a separate paper, as does the Queen of England, who does not have a passport.) 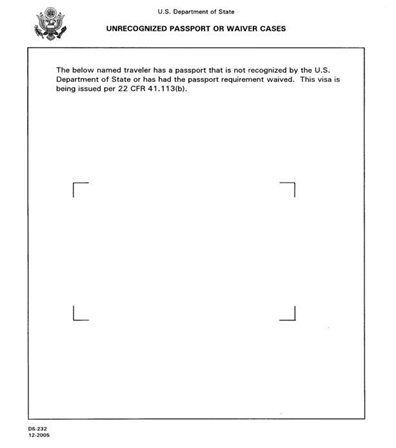 Not the answer you're looking for? Browse other questions tagged usa paperwork refugees or ask your own question.

2
Refugee in France, travelling to the USA as a tourist?