How to use cloud cover information to track auroras?

I would like to travel to Iceland to see Auroras. I am in the process of planning my trip so that I maximise the chance of seeing one. I understand that precisely locating Auroras depends on cloud cover, darkness, etc. I have the following information in Vedur.is about cloud cover in Iceland: 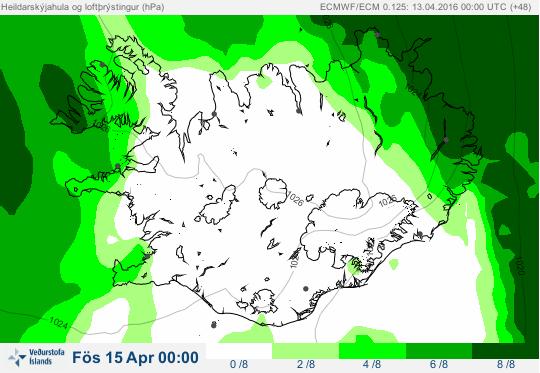 How do I predict the best spots to travel to find Auroras? At first sight, the picture tells the story of good news: the white areas are clear skies, and there is darkness from 9PM to 6AM, and the aurora forecast is 'Active'.

But the white region is pretty vast and expansive. Does that mean I am likely to find auroras all through my journey traversing these areas? Or are there heuristics which can aid me in selecting roads to travel in order to see auroras?

Not sure this is so much a travel question as a meteorology\astronomy one, but I'll bite :-)

I know more of the meteorological side than the astronomical. I've learned little bits and pieces at university and through websites, but honestly, I'm not anywhere near an astronomy expert. So I'll just tell you what I've learned and put together from the Internet.

I'm really for understanding the raw data itself... gives you a more clear picture rather than just being told a single prediction you have no idea of the bigger picture of. But in terms of pulling together the information well... that Iceland Met map appears to be top notch; it's using one of the best available meteorological data sources, and seems to match the better aurora forecasts too.

The thing that probably isn't conveyed enough there or anywhere (or in weather forecasts, for that matter) is the uncertainty\confidence level.

It looks like auroras themselves (though again, not my expertise area!) are rather quite strongly predictable through maybe 3-6 days. Seems it takes the solar wind\flares 1-5 days to reach us, so it's just looking at eventual impacts of what is basically already there. Probably not a lot of huge forecast swings (looking at some forecast error plots, look like most forecasts are right to within 1 Kp level (out of 4 or 5 typical variability) {as you've probably seen, the higher the Kp level, basically the stronger the aurora. 5 is a storm. 6 and 7 are talking pretty big. And events bigger than that occur only once or twice a decade.}
On the SWPC link, there is also a 27 day forecast, which is quite enticing. It looks like that is based upon the fact that sunspots rotate around the sun in about 25-30 days, so one cycle may still have some predictability to it. As you can see from http://www.solen.info/solar/images/solar.png (the top black and then red lines are the key ones), there is some monthly repetition, but also quite a bit of variability.

Weather Unfortunately for everyone, cloud cover is the bigger challenge. Especially on an island like Iceland, since you can't just drive to a better area. What these sites don't make clear is how the reliability of cloud predictability is pretty poor. I dug up:

This shows bad cloud forecasts are over by lead time (this is the National Weather Service nationwide average for last month). Things to note:

The cloud verification site also mentioned something called the Heidke method, which better shows how large the misses are. And it shows the results are actually even worse... starting at about 28% usefulness at 3 hrs out, then dropping below 10% by about 3 days.
This is for the NWS. The ECMWF (what Iceland's plot is using) is generally the best global weather model. But the NWS forecast takes ECMWF into account and so should be competitive\better than it. So the models, if anything, will be poorer than the numbers given. Even worse... this is Iceland. There are regions of the US that often don't experience much cloud coverage... and most of the area sits where there are lots of observation sites upstream, giving better initial picture to make forecasts from... plus in Iceland storms often translate through rather rapidly... so it changes faster. All-in-all, I'd say cloud prediction is Iceland is probably quite miserable. The only saving grace may be that the proximity to so much ocean probably tends to temper fluctuations a bit. But then again, marine layers and such can be some of the ugliest things to forecast. And they have terrain and land cover variations too. I don't envy those forecasters! I would suggest you won't get much you can trust at all from a cloud forecast. Definitely beyond 2-3 days. Your best forecast beyond that (and often even in shorter range) is just their seasonal normals (climatology). http://en.vedur.is/Medaltalstoflur-txt/Reykjavik_001_med6190.txt has typical cloud coverage by month in Reyjyvik [look at the row labeled n... that is the fraction of the sky that is covered out of 8] So it doesn't change not too much through the year... and sits around 60-75% covered. Could still envision it varying a fair bit around Iceland than is typical for a smaller island because of terrain and ocean currents... so maybe there are some relatively clear havens. But went back and tried to see how different spots stacked up around the country[the 30 year avgs link from http://en.vedur.is/climatology/data/]... and if anything, Reyjyvik is a slight bit better than the north or northeast coasts.

The good thing is, once you get a few days out, the major weather patterns may sometimes start offering hints if there is a large stormy coming (or a lull). You can take a look at http://www.opc.ncep.noaa.gov/UA/OPC_ATL.gif and get an idea of what is going on currently. More often than not, they're in the polar region weather-wise, and storms will come from the NEish... though really anything is quite reasonable up that way.

Also, models still do help in some patterns, too. You can get a better, more regional look than the Iceland Met page offers by looking at the ECMWF plot homepage, http://meteocentre.com/models/get_anim.php?lang=en&map=eur&run=00&mod=ecmwf&stn=PNM&mode=latest&yyyy=latest&mm=latest&dd=latest shows the storms that should be coming through soon.

I'd imagine having a high near\to their north and\or west would be best for sky viewing, as it'd bring calmer conditions, and winds off the cool waters to the north (less moisture). But no idea really, local effects are always so important.

And then finally, when it comes down to the final planning, the satellite view itself is the key. http://en.vedur.is/weather/observations/satellites/#type=atlantic is the best I found. This will give you reality rather than model data, and something you can adapt from.

All-In-All \ Planning Ahead:
Usually if you're planning an aurora trip, I'd think it could go something like:
- I'd say first to keep at the last paragraph or two (by scrolling down the top window half) of http://www.swpc.noaa.gov/products/weekly-highlights-and-27-day-forecast. Human forecasted are a lot of skill in tough data\stormy locations. And then likewise look at the 27 day plot link I gave up above that goes with it.
- Then when you see them mentioning something on the horizon, start more actively looking into flights and keeping loose tabs until it gets down near a week (if you can wait that long to pull the trigger on the flights... if you can't, well, it'll just have to be a bit of a shot in the dark, you'll have to make your best guess and go with it!).
- Then when you're at about a week, start looking at any hints from the global weather pattern, see if there's a protracted storm setting up... and likewise see if the aurora length should be big enough to cover at least 2-3 days.
- Then finally, if you can hold out on final purchasing until 2-3 days out, that's when the cloud forecasts really start to become useful, and you've probably maximized your chances as best you could.

Honestly, when doing the planning... it's a lot like storm chasing trips out here in the US (for those not from the Plain States)... the longer the event you target, and the more time you spend... the better. And then if you can be flexible as late as possible, it'll give you the very best chance. But it'll always be a fair bit of luck. Unfortunately the night-length times are already down near zero. Yeah, there's still maybe 5-6 hours between sunset and sunrise right now... but http://www.timeanddate.com/sun/iceland/reykjavik shows that the last full night of the year was April 10th. Astronomical twilight doesn't mean a ton of light, but it's some... and it ramps up to full-time nautical twilight (where you can see the horizon clearly due to the light) in just two weeks. So unless you're there for the ~Kp4 tonight (4 is under storm levels, so not the real bright vivid stuff... though https://www.youtube.com/watch?v=dtGfMWBC1u4 shows it can still be pretty!)... there's not another Kp4 forecast til the 23rd, and no Kp5 until almost May... and with the sky lightened, and short nights to look in, I just don't think it'd be great unless one is really desperate now.

Though the 11 year peak is fading away, would think you could probably catch one or two good nights with some strong planning next year. If you going to the right type of place (like Iceland), at the right time of year [winterish] and decade (the next year or so, or wait 7-11 years)... and if you can stay a bit, I imagine you'd probably have pretty good success. But in planning, there's only so much science to it, especially with the clouds, unless you can get to within 2-3 days to finalize your trip. But regardless, you still just always have to just make the best of your trip! A lot of money and time to spend. Yet it makes success that much more precious.

And if, by chance, you're on the plane now... I'd say check that satellite and your Iceland Met aurora forecast combo map, then try to match that up with the short term aurora forecasts (first the 3 day (first 1\3rd of vid shows you where it's expected tonight), then the 30 min trend (focus on the very end, as that's where it is now)). Seems like the aurora has trended towards the south side of Iceland in all those. And the satellite shows a big batch of clouds slowly trudging towards Iceland from the NE (matching the red trough on the weather map). But the clouds are moving in it's slow enough that there's at least a fair chance it holds out or you get broken clouds (intermittent viewing) according to the ECMWF. SW sides of the country, near Reykjavik, are probably best, though you adapt as you get more data. But... all-in-all... at least you've got a shot!

Incredibly, rather than my usual long philosophical discussion, I have exactly the answer for you:

Not the answer you're looking for? Browse other questions tagged tips-and-tricks iceland auroras or ask your own question.