Watching nuclear tests as a foreigner

This question is a bit general because I don't know which, if any, countries will be conducting nuclear tests in the future. Hopefully none!

Are nuclear tests open for foreigners to watch them? I don't know whether it's allowed or not because nuclear tests are often done to indicate a country's capability to other countries, but on the other hand, there can be some secrecy around military-related things.

Are they generally announced ahead of time? And is there anything to "see" (or hear or feel), given that they're most likely underground tests?

The comprehensive Test Ban Treaty CTBT is not currently in force since it's not been ratified by 8 nations (China, Egypt, India, Iran, Israel, North Korea, Pakistan, United States). However no tests have been carried out since 1998 other than in North Korea.

You could write to tour agencies (most of which deal with a single North Korean government agency) or even the government of North Korea with a request, I suppose. The North Korean tests were somewhat known in advance. The most recent one was described as an artificial earthquake of magnitude 5.2 which isn't all that big unless you are fairly near. Also countries in general, and probably North Korea in particular, are not keen on random foreigners skulking around military areas. Real earthquakes vary a lot and are not the same as underground tests, but here is a 'shake map' from a (rather larger on the log scale) 5.5 earthquake in California, courtesy of the USGS: 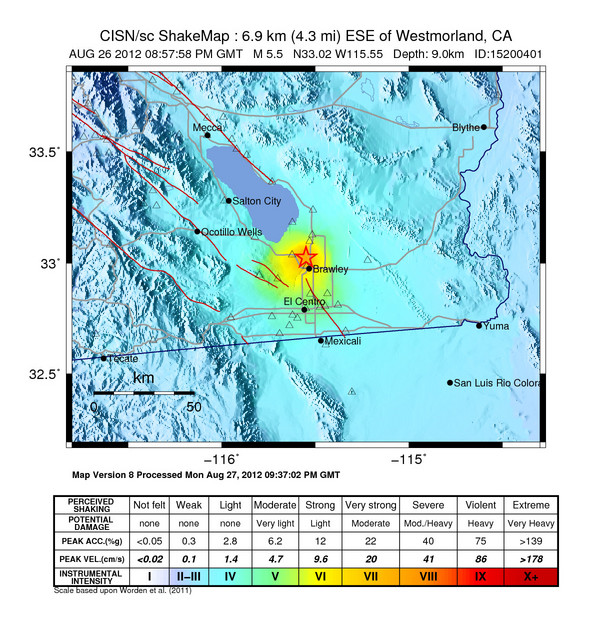 Looks like you'd have to be within a few tens of km to feel anything, which probably means a VIP invitation or nothing.

The purported test area in Punggye-ri is about an 8-hour drive from the capital Pyongyang.

Not the answer you're looking for? Browse other questions tagged events geek-travel military or ask your own question.

5
Guided tours of Japanese nuclear power plants
4
How/Where do I make local friends in a short-term (1 month) stay in Japan?