Which is the longest route/train travel possible?

I recently read something about the longest train travel possible. The rules are simple. You can change but you should always travel by train. (Getting a train to somewhere, making a couple of km by bus to a connecting station is not an option). Doing diversions to increase the route is not a possibility either. Else you could just travel in circles around Europe (or anywhere else) and travel forever.

Unfortunately this was only a tweet, that mention that the longest train travel was from Portugal to Vietnam.

Does anyone know about this route? is it really possible? is it actually the longest?

After a lot of googling I think I found the article: 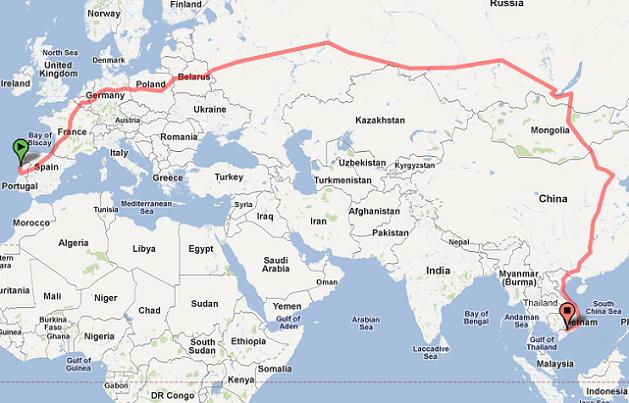 According to the author the largest travel train possible stretches from Portugal to Vietnam. 17.000Km by train.

He even calculates the costs and time to spend on the journey, including exchanges:

Unfortunatly the post is from 2011 so the prices might not be updated The total journey would take around 14 days and cost around 2000 USD.

Update: It's actually possible to make the trip 551 Km longer if instead of departing from Porto you depart from Lagos, south of Portugal. Source: http://fugas.publico.pt/Viagens/359032_sim-a-mais-longa-viagem-em-comboio-do-mundo-comeca-em-portugal?pagina=-1

One person has documented his train trip from West Hampstead (in London) to Central (in Hong Kong), which took him 22 days. He also discussed some of the practical difficulties he faced as he a seasoned traveller in the posts. (The first day can be found here.)

In terms of the Great Circle distance, it is about 1000 miles shorter than the journey related in the previous answer from Oporto to Saigon, so I concede it falls someway short of being the longest, but his story is entertaining enough to deserve a plug.

Unfortunately it is hard to give an optimal answer. It might be doable to find the fastest connection between these two cities (if you know which cities you will pass definitely), but it is harder to find the shortest such route in terms of distance.

I'll here give an outline of the fastest journey along the silk road. This however is far from the shortest such route. Just note that it would be much shorter to go from France to Switzerland, Austria, Hungary and via Ukraine to Russia without going up to Moscow (but going via Voronezh to Samara).

It should be clear that in Europe this is not short but fast. The main difference to above answer is going from Moscow to Astana and onwards to Urumqi and Nanning (via, for example Chongqing).

The trip lengths are (I just state them for the most important changes to the other answer):

Comparing just the time spent on trains (without times needed to change; I think a few of the trains involved in my answer don't run daily, so figuring out this would add some more difficulty), with nsn's answer it takes around 190 hours (not counting the subway ride in Beijing) to get from Moscow to Hanoi. Using my answer, one spends around 177 hours on trains from Moscow to Hanoi. I'm pretty sure though it will take more time to take this route since there are more changes involved.

Unfortunately I don't know of any way to calculate the distance of this route, but I'm quite certain it is shorter. 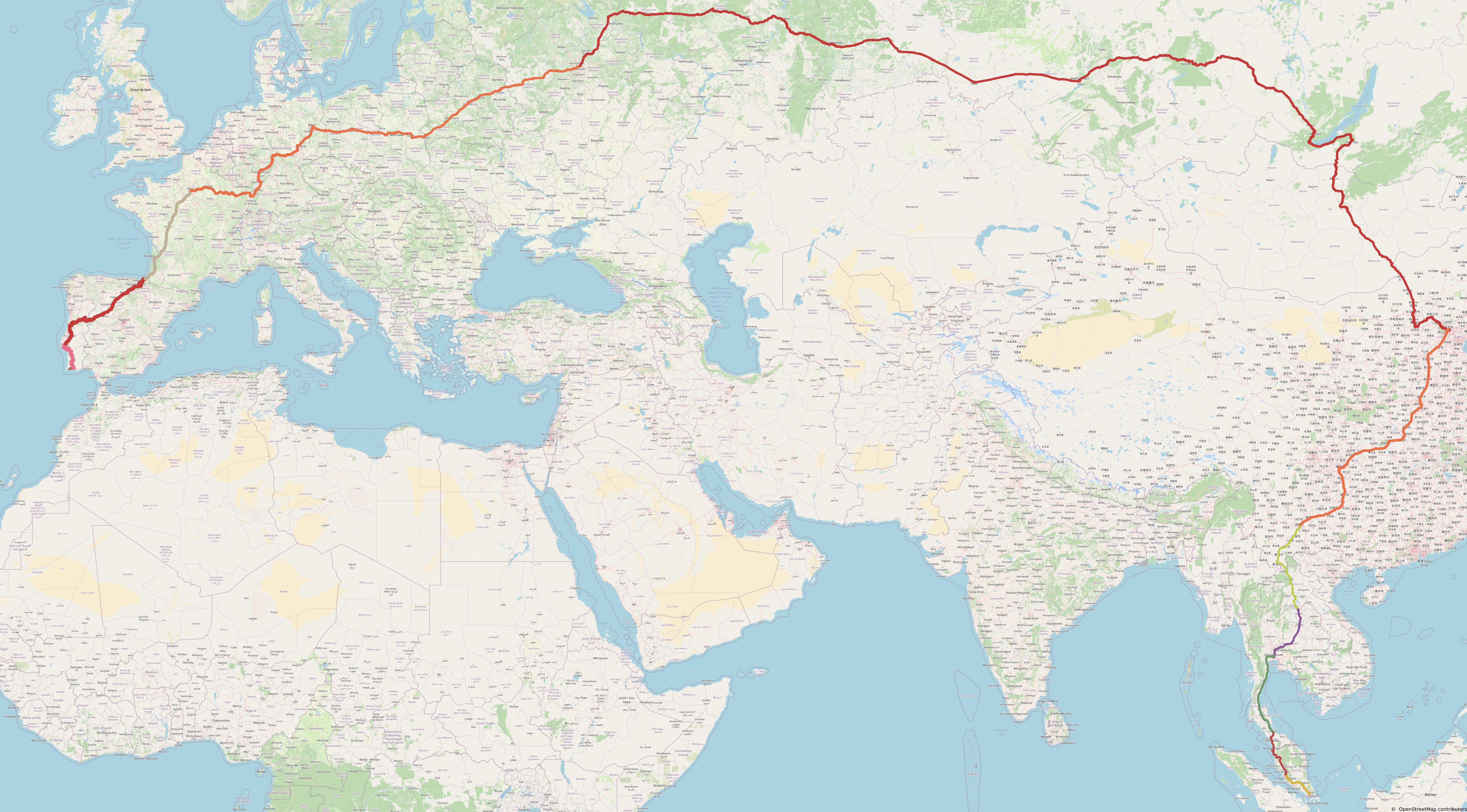 Not the answer you're looking for? Browse other questions tagged trains factoids or ask your own question.

29
What is the fastest theoretical route for the London "Tube Challenge"?
7
Combining Regio-Ticket Bayern with "Grossraum" tickets?
6
How to understand the Indian Railways from abroad?
5
What's the point of reserving a seat when purchasing an Off-Peak/Anytime train ticket with National Rail?
13
Can I travel Italian regional train tickets in the opposite direction of travel?
11
Which is the largest train in terms of passengers?
3
How can you travel on a trans-Siberian train when it is fully booked?
22
What is the longest distance between two stops of a train route?