What makes the tap water on board airplanes unsafe to drink?

Every single airplane toilet I've ever been to had the following (or similar) sign: 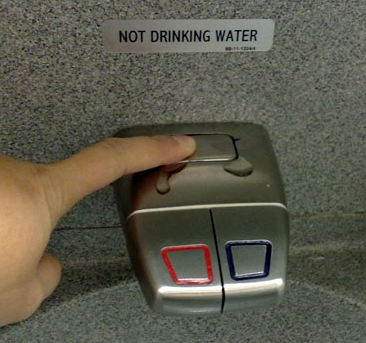 tl;dr: The airplane "tap" water can be contaminated, to err on the safe side, don't drink it, don't use it to brush your teeth.

So apparently this article of the Wall Street Journal got it all started in 2002. An excerpt:

some little-noticed studies from Japan to the Netherlands have turned up some unfriendly bacteria in the tank water, including E. coli and the germ that causes Legionnaire's disease.

They also did some own testing with similarly distressing results:

contamination was the rule, not the exception: Almost all of the bacteria levels were tens, sometimes hundreds, of times above U.S. government limits.

According to the article it is also not uncommon that the water from the taps is served for people to drink when supplies of bottled water run out.

Apparently this prompted some action by the responsible U.S. government agency in 2004. However a quick google search turns out that test results aren't as nice even today as they should be: from 2009 to 2013/2014/2015 the theme seems to be recurring.

As a take-home message: to be safe, don't drink the tap water from the plane. Don't use it to brush your teeth. Bring a bottle of water on the plane or get bottled water from the flight attendants. If you want to play it really safe, use hand sanitizer after washing your hands in the loo.

You need to think of water tanks on the planes as being the same as those water coolers you see attached to the back of work trucks. They are constantly being refilled without being scrubbed out inside, overtime bacteria both noxious and harmless may build up inside.

The tanks on aircraft have an additional issue with being filled from multiple water sources, some of which may not be 100% perfect (especially those involved with international service to less developed areas).

Airlines contract to have potable water supplied to their aircraft, but as they know this is not 100% guaranteed safe, they preempt legal issues by labeling the water as such.

I have noticed less of these labels on newer or upgraded aircraft on recent fights. Perhaps they are adding a filtration system to the onboard water system.

Not the answer you're looking for? Browse other questions tagged health aircraft hygiene tap-water or ask your own question.

13
Are airlines in the EU obligated to provide water for passengers?

27
What are safe uses of non-potable water?
27
Is it safe to drink water with a strong chlorine smell?
14
How correct is my intuition that tap water is safer in the mountains than in cities?
27
Is there a website to find points to get tap water at airports?
25
Going to New Delhi for a conference. Where to drink/get water?
8
Where to get cheap drinking water in Cambodia?
39
What can I do if I'm seated next to a person with bad hygiene on an airplane?
1
US tap water safety: leaded or unleaded?
11
Can only eating processed food and bottled water reduce your immunity?
4
Is properly sealed bottled water ever unsafe, even in developing countries?