Where can one apply for a UK visa in a proper embassy?

In Helsinki, UK visa applications involve a visit to what appears to be a temp agency. The UK has a perfectly nice Helsinki embassy, so this isn't an issue of remote location. I had assumed that this was because the whole process had been outsourced, but a recent Vice article suggests otherwise:

Here, instead of queuing up at the embassy to apply for a UK travel visa, Emiratis willing to spend £435 [$620] for the privilege will be able to drop into what's been described as a "Platinum Lounge"—via a dedicated chauffeur service, naturally—which offers "privacy and comfort, away from the hustle and bustle of the main application center," and where "faster processing, of course, comes as standard."

Is Finland an exceptional case, and UK consular services are usually handled directly, or was this a fact-checking slip at Vice?

The UK has a perfectly nice Helsinki embassy, so this isn't an issue of remote location.

It's a great location, but British posts abroad require an authorised 'visa section' before they can issue visas and the embassy in Finland does not have one. This is the standard case for all British missions in the Scandinavian region.

Is Finland an exceptional case, and UK consular services are usually handled directly, or was this a fact-checking slip at Vice?

No, Finland is NOT an exceptional case. The news article you linked to explains that Finland was, in fact, normalizing to the standard case.

Let's look at an exhibit the government sent out to the UK legal community last year... 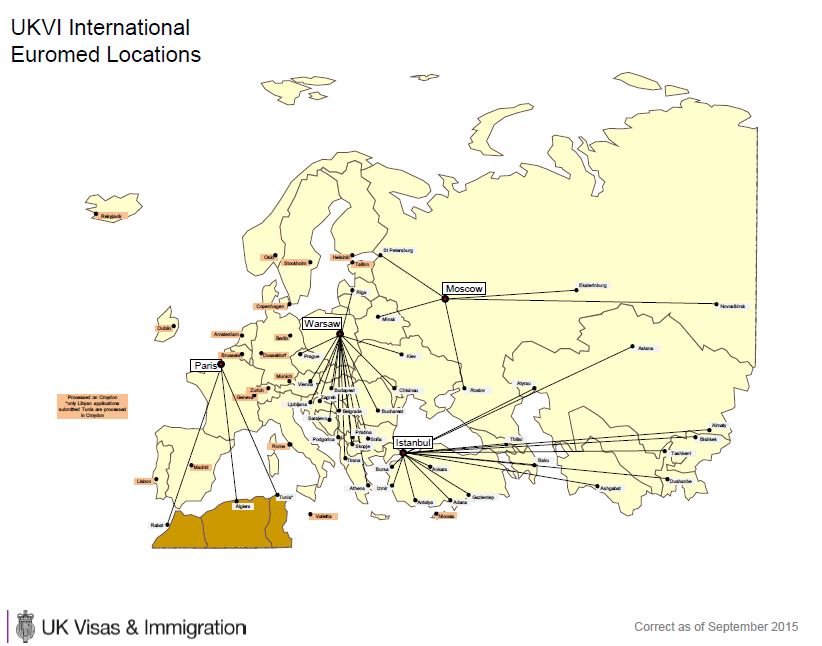 It shows that visa processing in Helsinki (and other places) is actually performed in Lunar House in Croydon. In order to make the process transparent to an end-user, they use a 3rd party contractor who collects the biometrics and then acts as a secured courier. They are referred to variously as Visa Facilitation Services (VFS) or Visa Application Centres (VAC).

The text you cited in your question refers to some of the premium services offered by the VFS in Dubai. Per the comment provided by 'mts' (to whom thanks), it's known that the same or similar services are available in Canada, the USA, Saudi Arabia, and virtually all visa-national countries where such premium services are demanded. For that reason, I would not extend a high level of editorial credibility to that article. Premium services are created and controlled by acts of Parliament and the debates are a matter of public record.

Despite the use of 3rd party VAC's and VFS's, decision-making on a visa is always performed by a British national crown servant who holds both a security clearance and a mandate to perform decision-making on behalf of HM. Also a post that can issue British visas is called "British Consulate General" and is often a stand-alone mission (such as the BCG in New York), these are the sites that will direct you to the appropriate VFS.

So in order to apply for a UK visa, you would create an account at Visa4UK and towards the end of the application the program will present a list of VFS's in your current location where you can present your application and enrol your biometrics.

Generic tip: never, ever, EVER let a VFS employee give you advice or remove documents from your application. Especially in India. Although they might like to act like experts, they are trained as couriers and generally have no clue what they are talking about.

Not the answer you're looking for? Browse other questions tagged standard-visitor-visas helsinki or ask your own question.

7
Applied for a UK visa as a couple, but only wife received a notification about getting her passport back. Should I be worried?
2
Is the UK planning to charge fees for application status checks?

6
Can I apply for UK Visa two weeks before travel date
1
Can an Indian passport holder without a travel history apply for a UK visa?
2
When parents apply for UK visas, can one be approved and one refused?
2
Retired Parents - Apply Visitor Visa
4
Does my proof of funds for my UK visa need to be in a proper savings account? Can it be in a second checking account?
6
Where can I exchange my old matkakortti for a new one?