Can you use an Eurail unlimited pass without having to pay additional fees?

I have read a bit about the Eurail unlimited passes available to USA and other non euro residents. Current the unlimited (unlm trips every day) for 3 months is around 1700 eur.

There is a lot of mention of the hidden fees associated with using this pass, especially the 10 eur or more fees required on many routes for (mandatory) seat reservation.

Question: Is it technically possible to ride every day on this unlimited pass while never spending more on total than the cost of the pass?

In other words is it possible to completely avoid additional fees?

If so, how? And are certain destinations (cities) completely inaccessible by eurail pass without paying additional fees?

You will have to do research to find out which trains you can use without surcharges, but it is possible.

It is still likely you will spend more money on the rail pass than you would on early booked point to point tickets, but if you are a rail buff and therefore are in the trains often you may have a good deal.

The best thing to do is to read the right part of the Site of the Man in Seat Sixty-One,

Can I avoid paying any reservation fees? Sometimes you can avoid having to make a reservation & pay a fee fairly easily if you don't mind a slower or less comfortable journey. For example, different types of train may serve one route, and only the faster or more comfortable type requires a reservation. From Rome to Florence there are fast & frequent high-speed Frecciarossa & Frecciargento trains which carry a €10 surcharge, but on the same route there are a handful of reasonably comfortable fairly fast InterCity trains and slower more basic Regional trains, neither of which require reservation or extra fees for railpass holders. Between Brussels & Amsterdam there are high-speed Thalys trains taking 1h55 but with a €15 passholder surcharge, or hourly InterCity trains taking 3h20 with no reservation necessary and nothing extra to pay. The choice between speed, comfort or avoiding the reservation cost is yours!

In other cases trying to dodge the fast train reservation fee is more trouble than it's worth, as it means taking a relay-race of local trains, taking hours longer and involving several changes of train. It may be better to bite the bullet and pay the supplement. I'd put Paris-Brussels, Paris-Amsterdam, Paris-Nice, Paris-Italy into this category. To find out if there is a reasonable no-fee alternative, try using the Europe-wide online timetable at www.bahn.de, but change the 'means of transport' box at the bottom of the page from 'standard search' to 'without ICE/IC/EC'.

You can find for almost all trains whether you need a reservation in the online time tables, like the German one which is also mentioned in the quote. Enter the stations (or often cities) you want to travel between, adjust date and time and hit search, in the results you will see a white R in a grey circle, for compulsorary reservations. Sometimes the sites have a 'reservation recommended' in which case you do not have to have a reservation.
When you 'change other details' (under the departure/arrival selection option in the top of the page) you can select 'all without ICE' which is basically all without high speed trains, or you can play around with 'only local transport' to see which gives you the best options for your wanted journeys.

As a general rule, all high speed trains and all overnight trains have compulsory reservations, but the costs of reservations range from free to quite a bit, I see €15 per leg of the journey, which can add up when you have to change a few times.

Bad news is that more and more the normal speed long distance trains are replaced by fast trains with compulsory reservations and the alternative for people who do not want to travel with reservations is to change trains several times and the travel now takes much longer than it used to before the fast trains.

In my view, the best way to have a long trip with a rail pass for a big area is to do a lot of short hops.
Go from a main city to the next, visit a few villages and stop off in a beach resort or national park. If all trips are no more than a few hours, you can do most by local trains which do not have reservation systems.

For instance, Paris to Amsterdam takes under 4 hours on the fast train, on the normal trains it takes about 8 hours with three or four changes. But if you make stops in the places the trains have you change, you have short hops, about 90 minutes each and can have a nice look around in Amiens, Lille, Antwerp and Rotterdam, as well as in Paris and Amsterdam. Or just take two for a stop and have three train travels that are not taking more than half a day each. 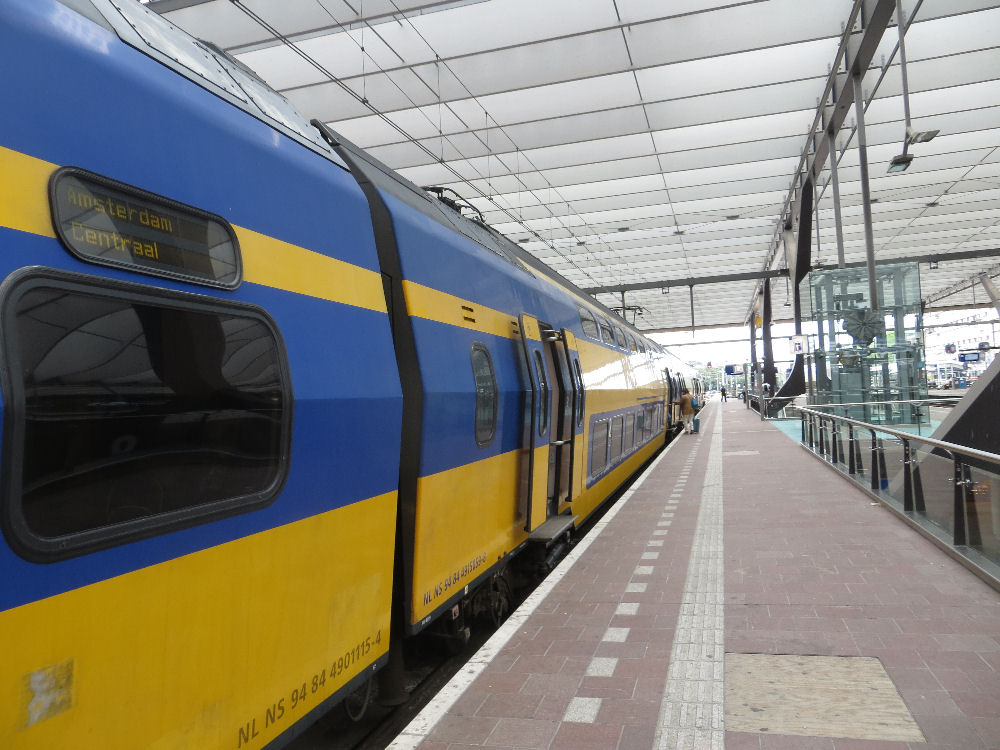 A 'long distance' train within the Netherlands, runs for about 3 hours Photo by Willeke, free to use.

As far as I understand you can get to all cities in the Eurail system without having to pay reservation fees, but you will need to take the slow route.
But not all countries touch borders, Ireland is separated by a long ferry ride or a flight, which is not free.
Greece and Turkey are almost as cut off.

Have a look at a good railway map of Europe and see how many rail connections there are. Most of the cities are connected with more than two others, in a detailed web with multiples alternative options for most connections.
Even when the direct connection between two cities is by high speed train only, you will find several alternatives that go the long way round.

Not the answer you're looking for? Browse other questions tagged trains budget europe eurail or ask your own question.

3
Does Eurail Continuous Global pass offer unlimited trips?
1
Can I buy Eurail pass offline? Are there any physical locations?
5
Where can I book seat reservations to go with a Eurail pass?
1
Can I refill 7-day Unlimited MetroCard to use as Pay-Per-Ride MetroCards after 7 days or vice versa?
7
How can two persons having Eurail and Interrail passes book same train and stay together?
1
Can I purchase tickets on the spot at station using Eurail pass?
2
Having a Hungarian PR, but a non-European passport. Can I use interrail?