Avoiding human trafficking when getting a massage in Japan

I'm currently unable to distinguish between Japanese, Korean and Chinese ethnicities. How do I avoid exploiting victims of human trafficking while having a massage in Japan?

Is human trafficking more of a problem with massage parlours that offer sexual massages (スペシャルマッサージ or Supesharu massāji) compared to places that only do non-sexual massages?

If so, how can I tell if a parlor offers sexual massages or not? 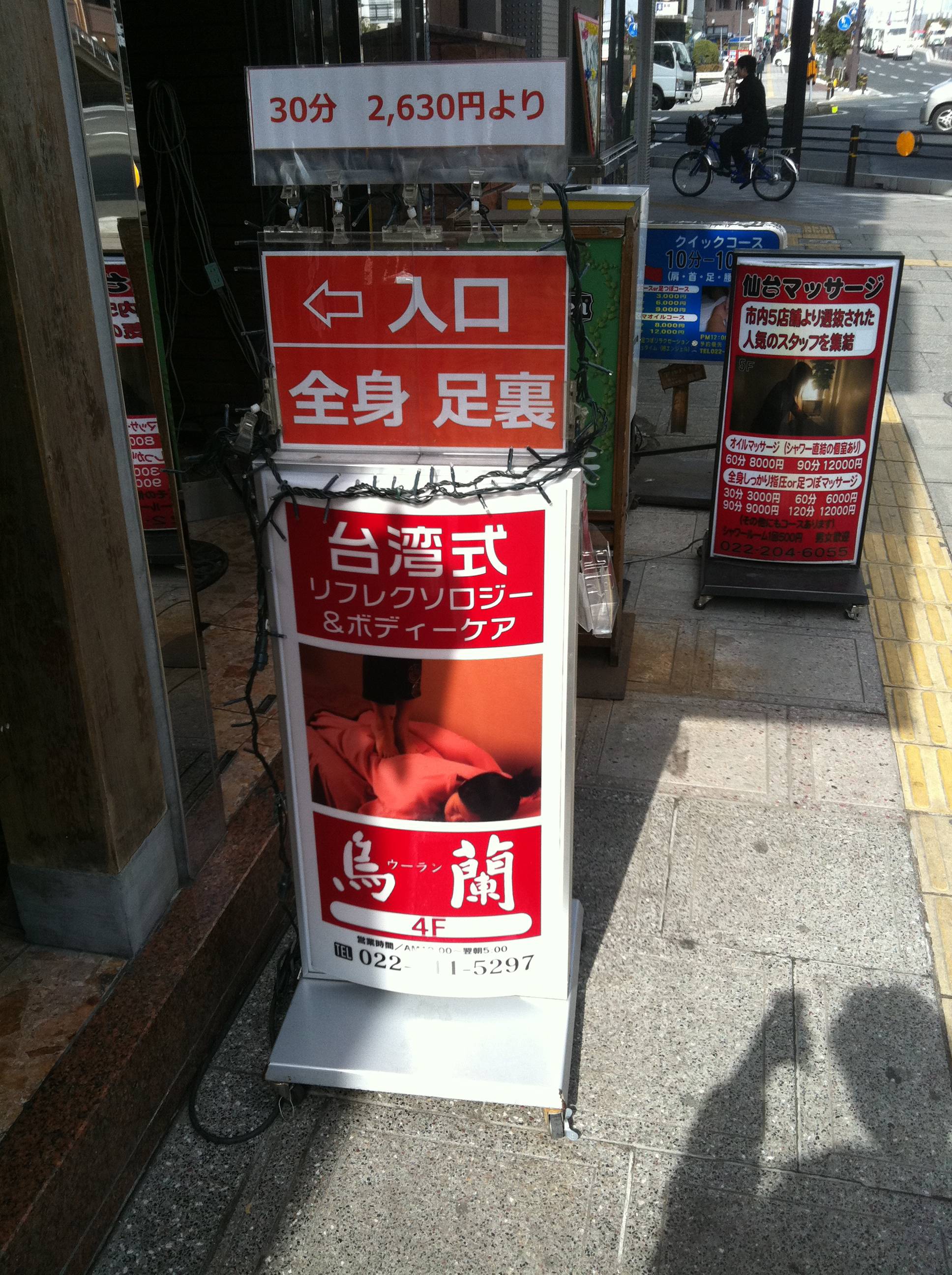 There are a couple of signs, but the one at the front has some kanji, and then "Reflexology and pedicure", a picture of a woman getting a massage, more kanji, then "4th floor, 10am to 5am".

I assumed that operating at late hours would be a sign it's sexually oriented, but the following is available until 2 am and otherwise appears to be non-sexual: 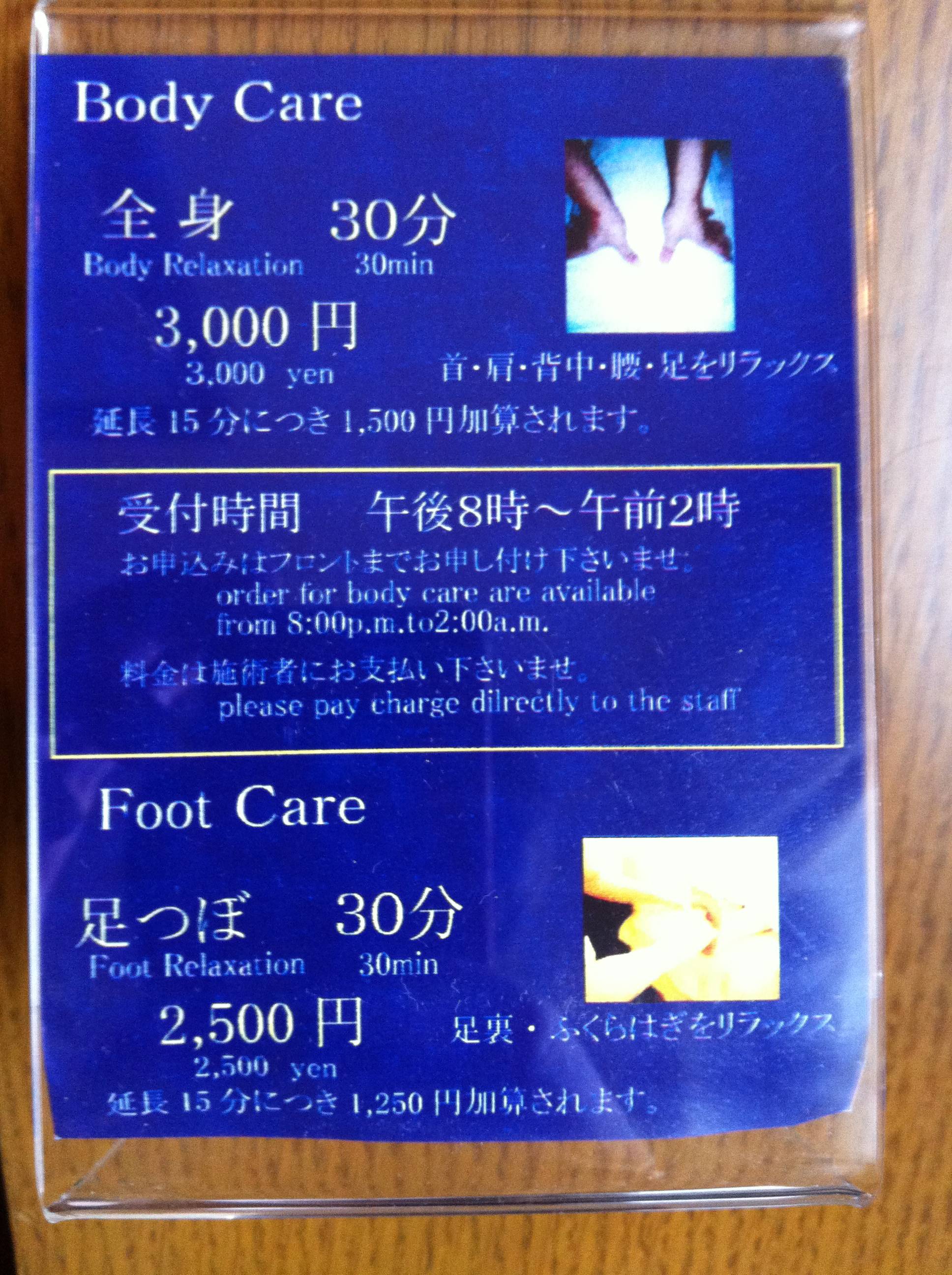 Advertising within my hotel room in Sendai. It offers both "body care" and "foot care", and says it is available from 8pm to 2am. Elsewhere (not in the photo) it mentions that the masseurs are qualified.

For the traveller, this is pretty much a non-problem.

First, the costs of human trafficking are too high to pay back with anything other than sex, so your run-of-the-mill hotel massage is going to be performed by an Japanese obasan (old lady), often blind, with fingers of steel. (Shiatsu means "finger pressure", and they ain't kidding. It's about as sensual as getting repeatedly whacked with a baseball bat.) So, no, you're not going to be contributing to the Yakuza if you dial up a massage from the hotel.

Second, as a foreigner you will have a very easy time distinguishing between non-sexual and sexual services, because the latter will: 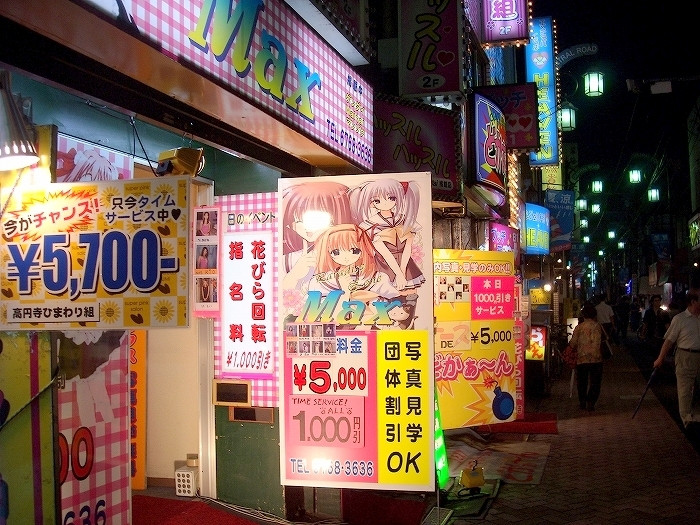 And if you still manage to miss the clues and try to get in anyway, no worries, since nearly all sex industry establishments make a point of refusing entry to foreigners.

What jpatokal says is true, except the part about what you'll get if you order up a massage from your hotel. I don't know how many times he's done that, but I have done it twice so far (from onsen type hotel) and that wasn't my experience either time. First time was a man, much to my disappointment - although it was a good massage. Second time was actually a young attractive girl - but there was no offer of "more". Her massage was fairly weak though, and she didn't seem very experienced - so maybe if I had the Japanese language skills I could have gotten more if I had asked. I only mention this stuff because I don't want people to get discouraged from ordering massage from hotels because you don't want what jpatokal describes. I don't think it's the most common thing. And you should also note that you can usually talk to the concierge to get whatever it is you want - this is true in any country and pretty much any decent hotel.
As for taxi drivers - yes, they usually know where to find just about anything, but in my experience, not that many speak English. I suppose you could call the taxi company and specifically ask for an English speaking driver - calling a taxi company comes with a 1000Y surcharge, just FYI.

Not the answer you're looking for? Browse other questions tagged japan ethical-travel or ask your own question.

6
Visa: How specific must the itinerary be when visiting Japan?
5
Do official health agencies recommend getting the “Japanese Brain Fever” vaccine for travel to Japan?
2
Theme parks about Japan outside of Japan
2
Getting visa to Japan from Shanghai
7
Discounts for Universal Studios Japan when it's your birthday?
14
When are stopovers permitted on Japan Railways (JR) trains?
9
Can tourists in East Asia still receive a massage from a blind masseur?
4
How can one can convert a Denso mapcode into GPS coordinates or a human-readable address?