How can I respectfully greet in Thailand?

I am in Thailand now, and this morning I tried to shake hands with our guide, but although she shaked my hand, it seems like this is not the way it should be done here. What is the best way to greet here?

Tom's answer is great, but let me add my two cents as a foreigner who has lived in Thailand for several years.

Etiquette highly depends on location, on who you are, and who you are greeting.

In a business environment, like greeting your colleagues in the office, handshaking is okay, because the office culture is mostly borrowed from the West.

If you're a tourist in a tourist place, locals usually don't expect you to be familiar with Thai language or etiquette. So a plain "hello" would be sufficient.

It is great if you are familiar with the basics of the Thai culture, it shows that you've expended some time learning. People would certainly notice it, and and this would raise your status quickly. But doing it in a wrong way is worse than doing nothing

The higher the position of a person you are speaking with (related to yours), the higher you raise your hands and the lower you nod your head.

Look at the picture below. A young man is greeting an older woman. His fingertips almost touch his nose, and he is not looking straight into her eyes. The woman in turn is doing rap wai ("receiving wai"). The same also applies to greeting police officers since they have high social status.

Personally, it took me several years (!) to get rid of looking straight in similar situations. 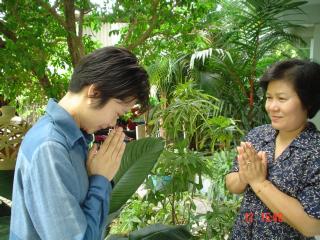 In a local shop or a restaurant, the situation is the opposite: you are the high-status customer, so doing a deep wai looks pretty awkward.

Yet another problem I noticed: Don't combine wai with the English greeting "hello". It looks very unusual.

Here's the button to press:

Say "Hello! Nice to meet you." and give a big genuine smile.

As foreigners, thais do not expects us to "wai". Don't go around "wai"ing to everyone you see :)

My advice is to observe how the thais do it before trying it yourself. I'm not the authority it how to use "wai" properly but this is from my first hand experience and what was taught to me by various thai people.

There are many ways and rules about "wai" so you need to understand it before doing it. Palm together with your thumbs at chest level, chin level, nose level and forehead level have different significance. General rule of 'thumbs' (pun intended) is the higher it goes the more respectful you are. When you "wai" you only use "chin", "nose" or "forehead" position. "chest" position is to receive "wai" from others, you can also use the other position to receive "wai" depending on who you are receiving it from. You can tilt your head downwards when doing the "wai" the more 'down' the more respectful. You can also bow your upper body/back when doing the "wai" the more you bow the more respect. So "wai" is a hands+head+back combination.

The so-called difficulty is there's no exactly rule to the right combination you have to use. Other factors include who you are, who that person is, the situation where the two of you are meeting, etc.

Let me share some scenarios and what i would personally do. First its important to know your own "status". I'm 31 years old. Age is important because asians respect our elders as a default setting. I'm a programmer, degree holder, and i earn say around between USD 50-100k, which is nearly 5-10x more then an normal 25k baht thai office worker. So i'm pretty rich for thai standard. But i'm a nobody, my dad isn't somebody. By 'somebody' i mean my dad doesn't own a 100 million USD empire or is a minister or some obviously high status position. I'm a regular "commoner" :) ok so with that here's what i would do.

If somehow a Minister of Thailand "wai" to me in a formal business setting. I would do a receive the "wai" by "wai"ing back with even greater respect. For me that is plams together, thumbs at nose level, back bowing about 20 degrees along with lowering my chin for no less then the duration which was given to me. Which would probably be very swift and short given that i'm a nobody. To show my respect, i would bow slighly lower and slighly longer (.5 to 1 secs longer).

Here's a formal setting in government. Picture below nose level "wai" with a slight bow. 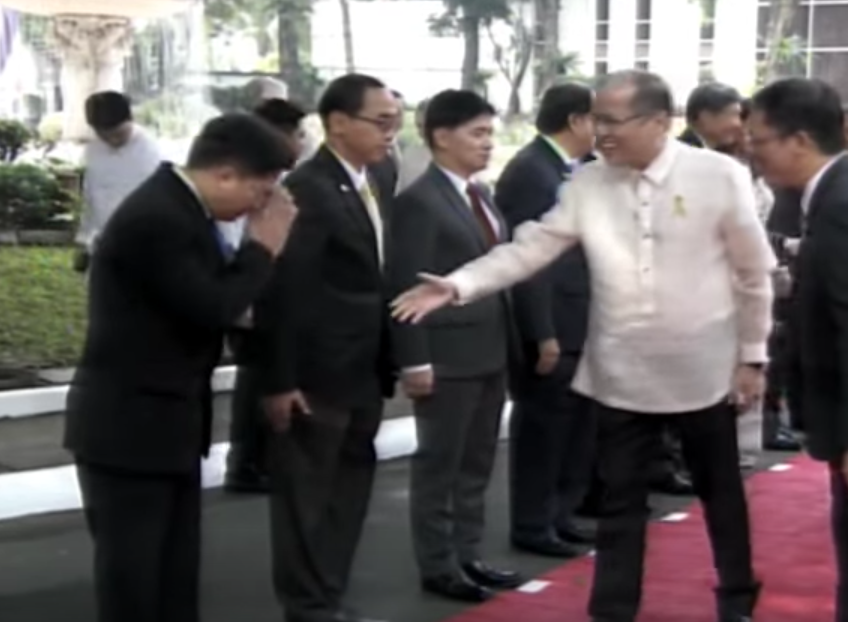 Picture below shows flight attendance "wai"ing to the Prime Minister and the PM receiving the wai by holding his palm at chest level all the way. Their thumb looks like around chin or mouth level but you can see them really bowing to show respect. 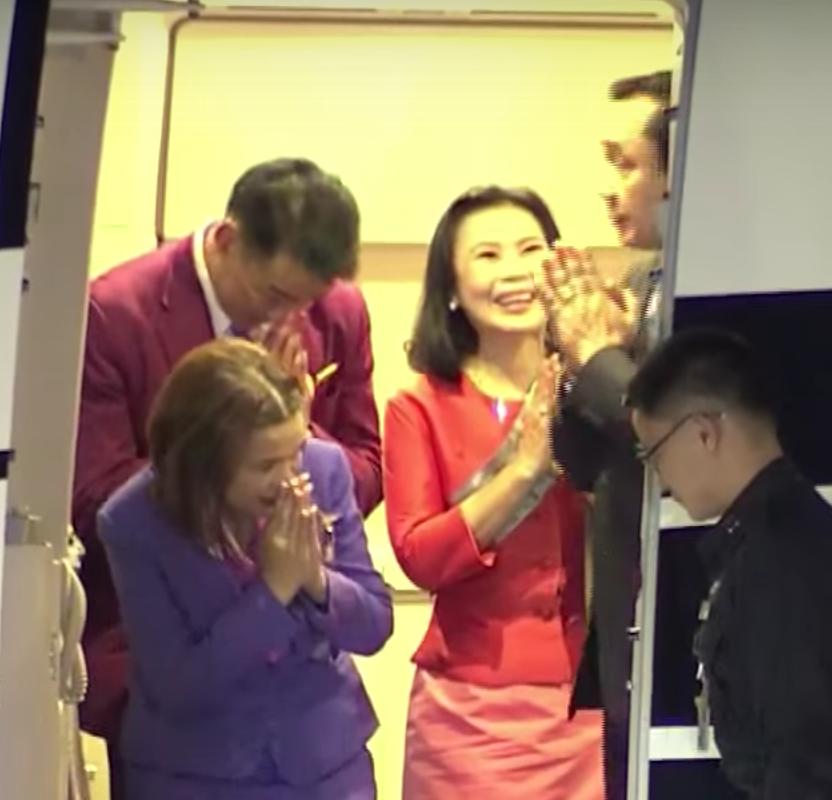 After the PM got off the plane he is welcomed by a lady and a man which i assume are also important people. The lady does not even "wai" but goes straight for a very warm hand shake and exchanges of greeting with big smiles. See how the man in white "wai" at chin level, with chin lower slightly with nearby no bow. I don't have any clue who he is but we can assume he is someone important and respectable in thai society. 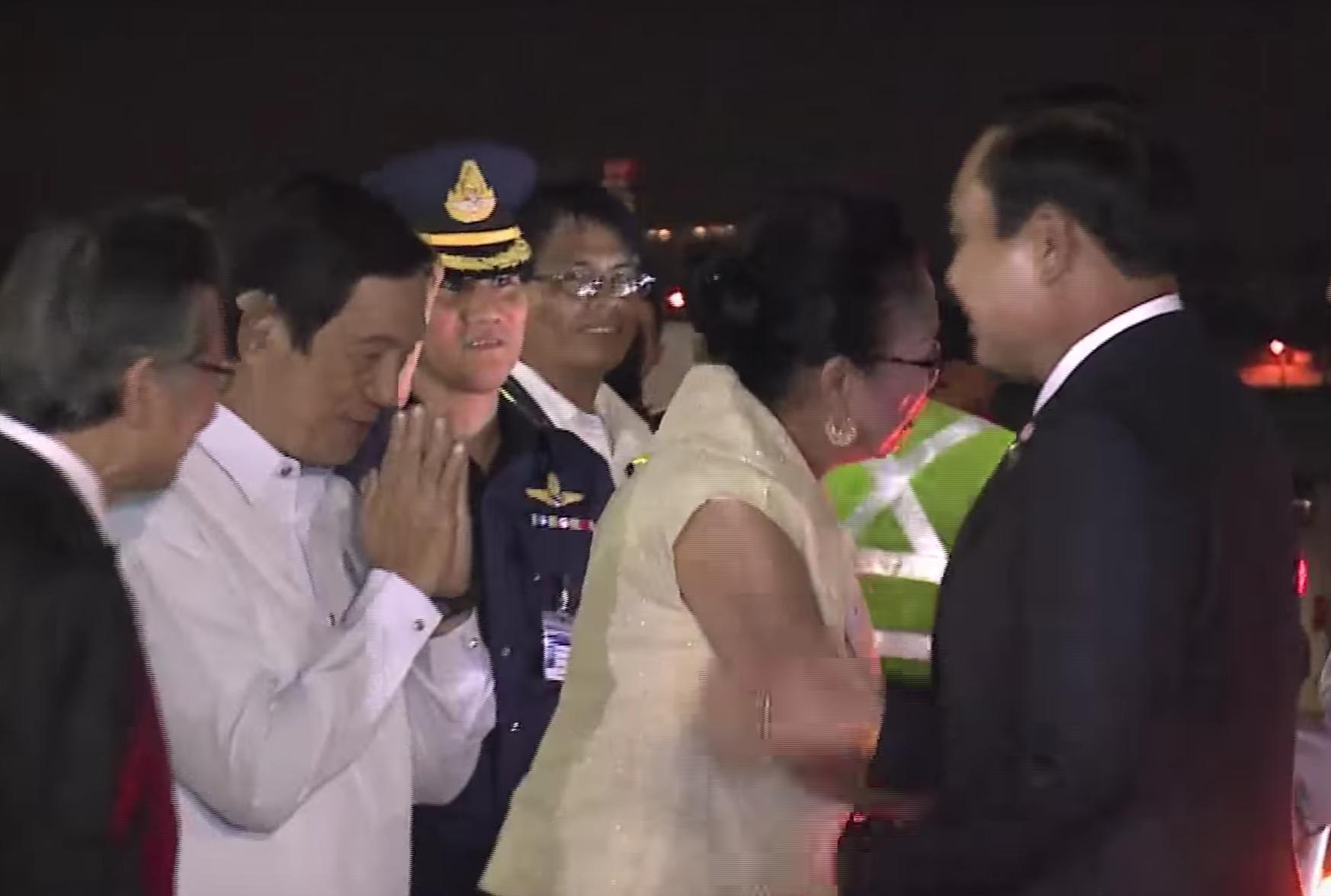 Here's the PM receiving the "wai" from the man in white. He does it nearly instantly after the white guy "wai" him. 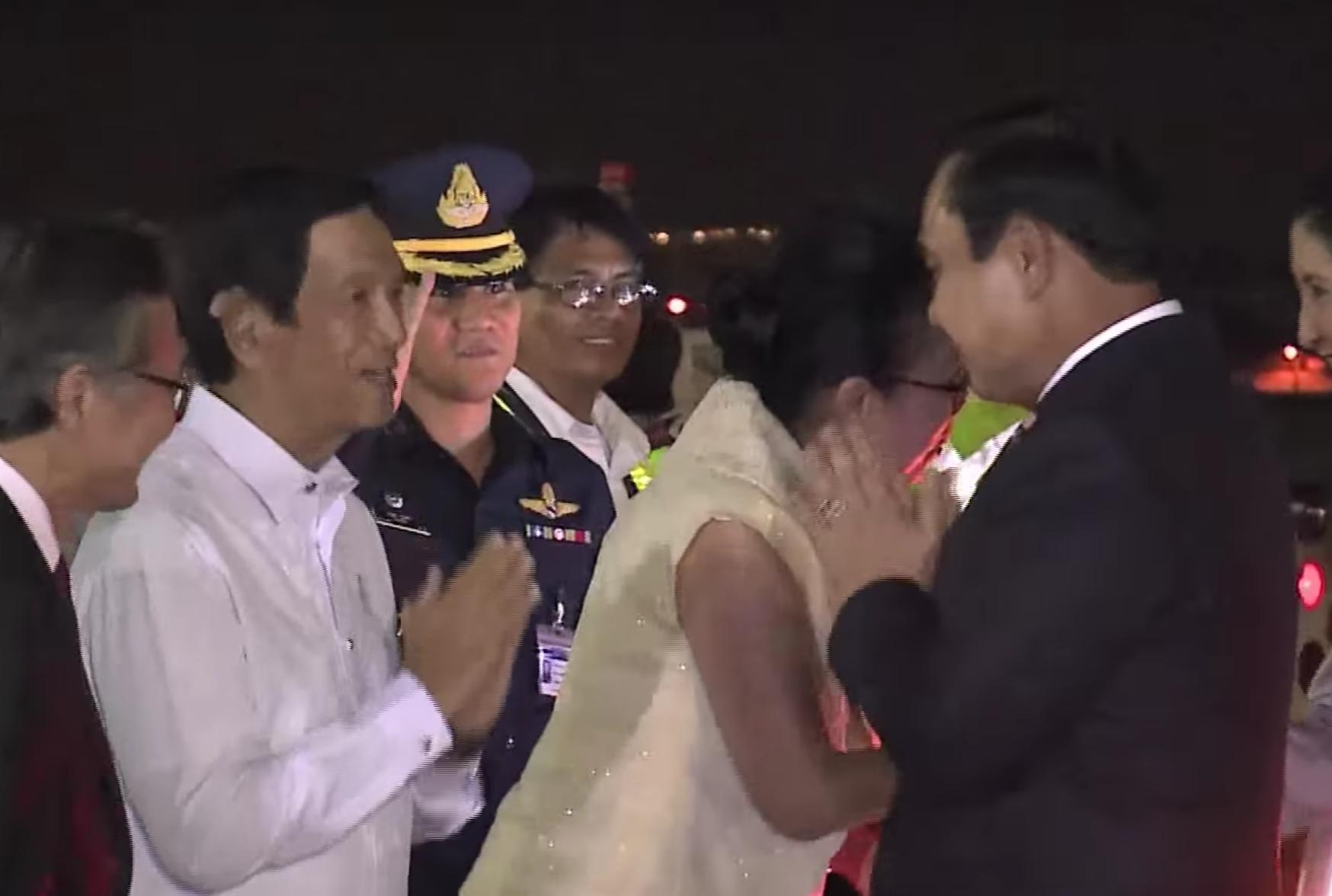 Thumbs position at forehead in my opinion would be for when I am "wai"ing to thai royalty, it's also appropriate in some situations when "wai"ing to a monk. Not appropriate when the monk is causally walking along the street. Appropriate when you're at the temple getting blessing from the monk. I should also mention that i'm a free thinker. But showing respect is important because that's how you get respected by others looking at you. If you're unable to show respect properly, people might think of you as stupid and uncultured.

Couldn't find a picture of people "wai"ing the king but you can probably imagine if not on their knees it would be a very respectful "wai" because he's such a great king. Below is a photo of the Thai King on one of his many trips to help the "commoners". As you can see the thai king is high educated and down to earth. He was talking to commoners in the poor parts of issan taking notes personally to help improve their lives. 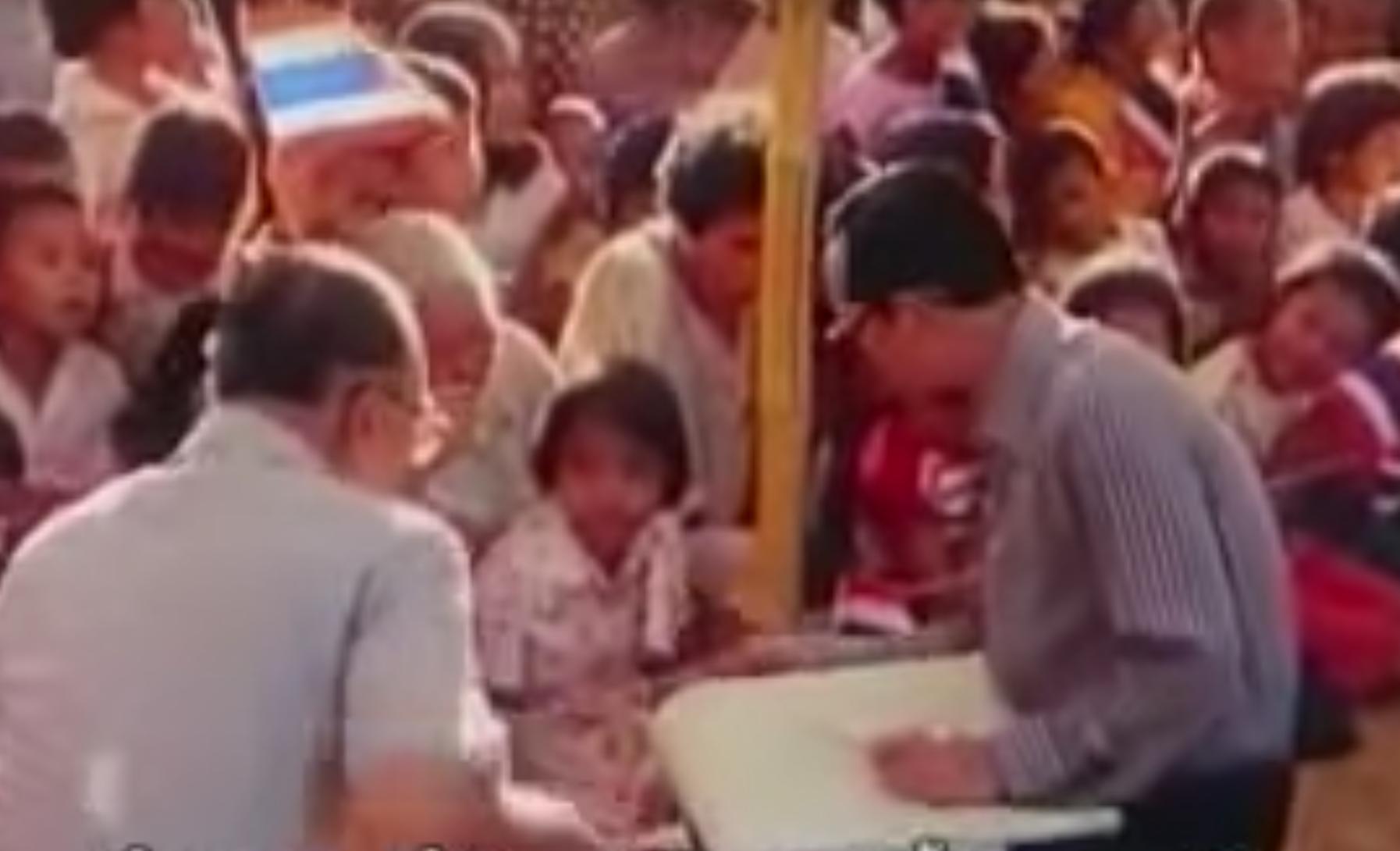 If i meet my friend's or girlfriend's parents for the first time, i would "wai" with thumbs at nose level too. Depending on the setting and situation i would bow or not bow. But I would definitely lower my chin, because their a generation older and parents are highly respected in thai society. Children respect their parents a lot and if their my friends or girlfriends parents then their the next closes thing to my own parents and i should offer the same amount of respect that i would give to my own parents.

I would "wai" my friend/gf parents when i first meet them and when leaving. If i meet them again after a few hours apart i would "wai" again and keep repeating until they are comfortable with me or tell me "mai tong wai" (no need wai). After which i would "wai" them still but with less frequency. Maybe only the next day if i see them again. Of cause do not over do it! If you go to the rest room and come back, its not appropriate to "wai" them again before sitting down!

For all other situations "wai"ing is really optional! Especially when meeting with "peers". Peers to me are people around my age, plus minus 5 years.

A situation which i would "wai" is when if im going out with my friend who is also kind of a "big sister/brother" to me. When she/he introduces her/his friends to me who are around my age i would "wai" them with thumbs to chin, slighly lowered chin, no bow or very slighly bow. with a smile and saying "wat dee krubbbb". It's a sort of respect I have for my friend by showing respect to her/his friends!

I won't "wai" people who are more then 10 years younger. I won't "wai" children. I won't "wai" in most settings where i'm the paying customer. I won't "wai" if the person is a peer and its not a formal setting. If the other person is a thai and they obviously know i'm not thai, i do expect them to "wai" me first as its their culture not my. Example: if my friend's friend, who is a peer, does not "wai" me, then in my opinion its not appropriate for me to "wai" them. I would fallback to the default "hello" and big smile. If they DO "wai" me. then i would definitely do have palms together at either chest or chin level. Chest level if the person is younger and chin level if the person is around same age or older. If the person is much younger like 10 years then "chest" level is the only appropriate level to me, and saying "satwadee krub" is optional. If the person is same age or older, in nearly all cases i would do "wai" and say "sawatdee krub" or "watdee krub" depending on the formalness or in-formalness of the meet up.

Sorry for the poor english and being overly verbose.

A proper greeting is a "wai", hands pressed together like with Christian praying, held in front of your chest fingers pointed upward and then make a slight bow towards the person you are greeting. You would also use the Thai words for hello - "sa wat dee khap".

She will return your greeting and may bow lower, as you are the "higher" person and will also end her hello with kha instead of khap.

You will find a variety of different pronunciation guides for the greeting, as Thai doesn't transpose into the Latin alphabet smoothly. Some will use sawasdee instead of sawatdee, some will add an "r" to the ending making it khrap.

Not the answer you're looking for? Browse other questions tagged thailand etiquette or ask your own question.

73
With the passing of Thai King Bhumibol, are there any customs/etiquette as a traveler I should be aware of?

11
How can I transfer money to Thailand?
5
How to get a tourist visa for Thailand when already traveling?
9
Getting around in Thailand without knowing Thai
5
Thailand Overstay in 2015 - Can I re-enter?
43
Is 'wai' greeting a serious thing? Is it inappropriate to 'over-wai'?
4
Proof of accommodation for Thailand visa on arrival
7
What is the difference between overstay and overdue in Thailand?