Can I prepay for a taxi from Boston Airport to a Boston hotel?

I need to prepay for a taxi from Boston airport to Hyatt hotel. So far I cannot find a company that will do this.

You cannot prepay for a taxi per se, as a taxi is a specific type of regulated class of transportation in Boston (as elsewhere). Taxis must display a medallion, must affiliate with a radio dispatcher, must have specially licensed drivers, and must meter or otherwise charge fares according to a fixed schedule among other restrictions.

But not every vehicle-for-hire is a taxi. You can arrange for a ride with an airport limousine service (which may be known in various parts of the U.S. as a car service, livery service, or black car service, with the distinctions and overlaps between these terms varying somewhat by jurisdiction). A limousine or livery car, unlike a taxi, is privately hired, arranged in advance, and costs a negotiated price. Many airport ground transportation companies offer a private car service along with shared vans and shuttle buses, and a web search will turn up dozens of other possibilities.

As another answer notes, there are also services like Uber, Lyft, or Wingz. These are generally referred to as transportation network companies (TCNs), as they reside in a legal grey area where they are neither considered taxis nor livery vehicles, though many local governments have sued to declare them as such. In any case, they also operate on a model of fixed, prenegotiated prices.

Not a direct answer, but worth considering: Depends a bit on which Hyatt. There are three in the Boston area.

Hyatt Regency Downtown: BOS has free bus rides with the Silver Line to South Station. From there it's a 7 minute walk to the Hyatt Regency downtown. This would not only be free, but at most times of the day also faster than a taxi, limo or Uber.

Hyatt Boston Harbor: This hotel is directly at the airport. For this hotel you don't need a taxi (and they probably would not accept the ride anyway). The hotel has free pickup service. See http://bostonharbor.regency.hyatt.com/en/hotel/our-hotel/transportation.html

Hyatt Regency Cambridge (MIT): Take a limo, Uber or taxi. If you need prepaid, Uber or a limo are the only choices. While it's only 5 miles, during rush hour it can take easily an hour to get from the airport over there. Plan accordingly.

Use Uber. It's an app for mobile phones which allows one to order taxis and pay online using a credit card. All international credit cards are accepted.

Online reviews confirm that Uber is available at Logan airport. According to the fare estimator the price for a ride downtown should be under $30: 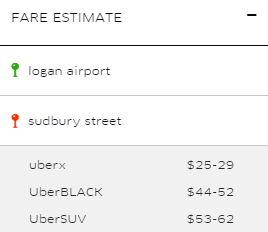 Not the answer you're looking for? Browse other questions tagged taxis boston bos or ask your own question.

5
Availability of taxi from Tbilisi Airport to a certain hotel during winter
3
How early should I arrive at Logan (Boston) for a weekday late-afternoon flight?
3
Figure for taxi ride from LAS Las Vegas airport to the MGM
10
Where can I store my bag in Boston for an hour or two?
4
Need to catch an early morning taxi from central Paris to CDG airport!
1
Taxi service at Chennai airport
3
Cheapest place to park for two weeks while working in Boston?
6
How can I find out what is the cheapest taxi from Helsinki airport?
2
Is there a restaurant outside baggage claim, BOS Terminal E?
2
Volunteer opportunities in Boston for practicing English?