On the map, the distance between the two biggest cities of Colombia doesn't seem that long at first (245 km as the crow flies). 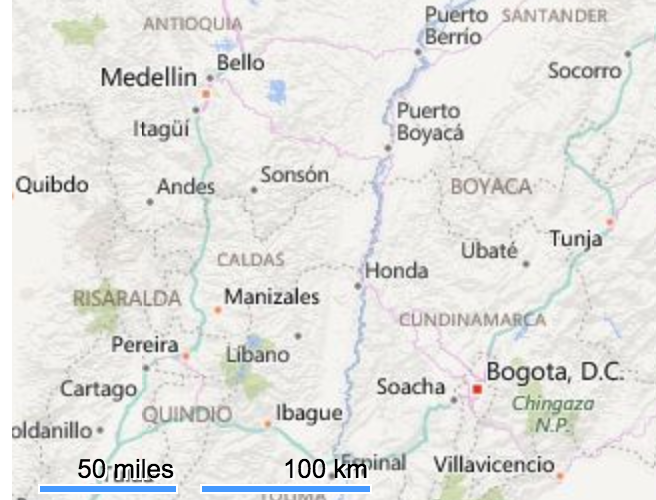 Then again driving distance is around 418–539 km according to quick search. Anyway, I was wondering how good an option an intercity bus might be.

With safety, quickness and price being priorities (in that order):

My guidebook (Moon) seems to generally recommend flying to get around Colombia, and doesn't give those details. It does mention that Terminal del Norte in Medellín and (apparently) Terminal de Transportes in Bogotá are the relevant stations.

Point of comparison: a BOG-MDE flight from VivaColombia (for tomorrow):

So, cost being about the same, even with the airport hassle (getting to/from + waiting; maybe 2-3 hours total?), 10 hours is a lot, maybe a bit too much.

Feel free to post better answers, especially if you have first hand experiences. (How about safety on the bus trip & at the terminals? If you take a night bus are they good for sleeping?)

Not the answer you're looking for? Browse other questions tagged public-transport buses colombia bogota medellin or ask your own question.

20
Are there ways to keep long-distance land transport costs down in France when not planning in advance?
3
Is there a night bus from San Gil, Colombia to Bogota, Colombia?
6
Flight connections from USA to Cali, Colombia through Bogotá
5
Colombia Inter-City Bus Route and Time-Tables
1
Bus schedule Pereira to Filandia
7
Can I get a Colombian passport in Bogotá, and how long does it take?
3
Do you go through immigration during a layover in Medellín on the way to Bogota?
4
How exactly can I buy a local bus ticket (TransMilenio) in Bogotá, Colombia
2
From Colombia to Ecuador by bus