Is there a website to find points to get tap water at airports?

We now have two questions about drinking water taps/fountains in airports, but they are very specific, one to one the terminal of a single airport, the other as wide to cover both airports in a smallish city.
This, and some banter about it on the chat, inspired me to ask this question.

Most of the time I travel with a water bottle, to fill after going through security, and I do prefer not to buy bottled water. That is more a principle than a money choice, but the inflated prices for water in some airports do make the money side more important, added to which comes the fact that when you have a stop over you do not always have local money and paying for water on a credit card is a bit over the top. 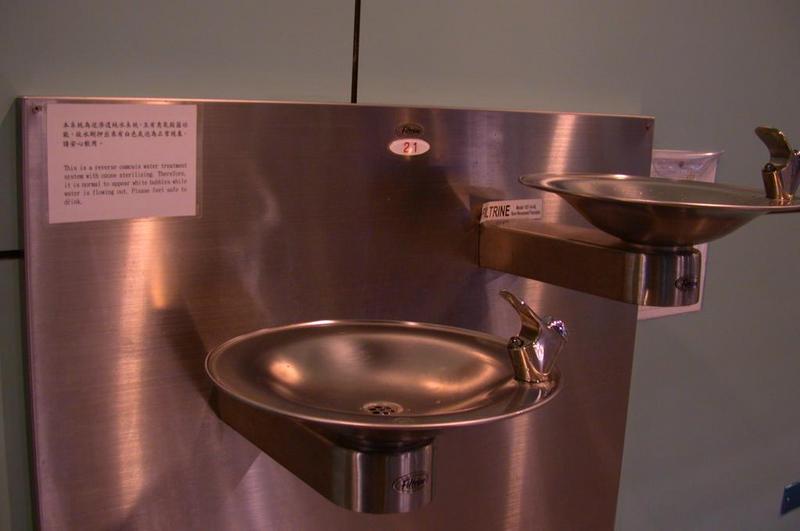 Are there any websites known to include water fountains in their information about airports? Either actual tap points or the fact that gettting water is hard (no taps or fountains, ask in restaurant,) or easy, (like Schiphol, Amsterdam Airport where there seem to be drink water fountains near every other toilet group,) or general for the country with added information that the airport is not better (do not drink tapwater in this country, there are no special drink water fountains on the airports.)
It would be a bonus to be able to see if it is acceptable to ask at an airport business to fill up your bottle, or even just a bit to take you medication, even when you do not spend money with them.

I am thinking sites like the one where you can find overnight/sleep qualities of different airports.

After a few months with no real responses, I give up on this question. Even drinking water points that were there seem to disapear, like on Schiphol, Amsterdam Airport. (Were I was told the water in the basins at the toilets is drinking water quality and has cold as well.)

There is always a place where you can get water for free.

Backstory on the free water in bars: In a lot of cases they are obligated to refill your bottle, or there is no excuse for them not to. For example in Belgium, whenever you get a connection to flowing water, you're getting an amount of "free" water. This is because you're expected to give others access to water if they ask you for it. This also has to do with "access to water" being a human right.

Affordable. Water, and water facilities and services, must be affordable for all.

In the rare case you can't get access to free water, I would complain. They'll likely find it easier to just refill your bottle of water, instead of dealing with the complaining and possible bad PR.

There is now a website wateratairports.com that aims to inform travellers what free drinking fountains are available in which airport departures, it has just started so it needs your help in finding them, there is no catch.

I created the site because I am fed up with the high price of buying water in airports, I travel regularly through Malaga airport where a bottle of water cost 2€ in departures and the same bottle is 0.75€ in the town. When you click on "reply" it will ask you to "login or register" a green box should open on the top right of your screen, you cannot add a new topic ( airport ) please do this in the general / comments about this website topic.

I think that websites displaying water fountain locations is probably asking a bit much of any public facility.

Water is now available in some UK airports free of charge, after calls from a watchdog;

A spokesman for airport operator BAA said drinking fountains offering free water were already installed at Heathrow, Gatwick, Stansted and Southampton airports, and Glasgow, Edinburgh and Aberdeen are in the process of having water fountains fitted.

I can't provide you with a link to a website giving you maps of water points, because I cannot find any, they may not exist.

A quick Google search (other search engines are available) should tell you if your airport provides free water at drinking fountains.

In many countries even if they don't want to fill your bottle in a cafe¹, especially somewhere closed like an airport they (have to or will) give you a glass of tap water. With a steady hand you can pour it into your bottle. This is even easier if you're buying a coffee or eating a meal.

¹Once they start saying it's for hygiene reasons it's not worth arguing with them.

Not the answer you're looking for? Browse other questions tagged air-travel online-resources airports tap-water or ask your own question.

26
Truth about Georgian tap water
26
Why is security screening done at the gate in some airports?
24
Are there any drinking water fountains/taps in Paris Charles de Gaulle airport?
12
Are there any drinking-water fountains in Prague PRG airport?
25
Going to New Delhi for a conference. Where to drink/get water?
1
US tap water safety: leaded or unleaded?
4
How to find public drinking fountains when travelling?
19
Is boiling tap water sufficient?