Taking dried food into another country through customs

I'm due to visit Canada to see an old friend who used to live in the UK. He wants me to take a favourite snack (Pot Noodle (really!)) for him.

Is this likely to be a problem taking it through customs and would I need to declare it?

I know there are restrictions on imports of foods, but everything I've read relates to risk of disease or pests, which I don't really see applying to a dried noodle snack!

The answer as to what is allowed or not allowed into a country varies depending on the specific item, the country, and sometimes even the specific port/airport you're entering through.

The most important thing to remember is that you should always DECLARE what you are bringing in. Almost every country has a question on the entry/customs form regarding food, and generally "food" is defined as anything that you can eat - even things like snacks/candy bars/teas/herbs/etc - and specifically things like Pot Noodle!

As long as you declare it, and as long as it's not something outright illegal (eg, drugs) then the worst that can happen is that they can confiscate it if it's something that is not allowed through that point of entry. You will not be fined/arrested/denied entry/etc if you've declared it, but you could be if you do not declare it.

Specifically for Pot Noodles, I suspect you'll be fine as long as they don't contain meat. The Canadian Government's "Be Aware and Declare" website has a list of allowed food products and the only restrictions that seem to be relevant are "no goods containing meat" and no milk or milk products ("dried, frozen, reconsituted, or fresh") . I'd be fairly sure Pot Noodles wouldn't contain either of those, and even if they did I doubt it would be in sufficient quantities for them to be rejected.

This is the form we all fill out when entering Canada: http://www.cbsa-asfc.gc.ca/publications/forms-formulaires/e311-eng.pdf

Here's a closeup of the food-related question: 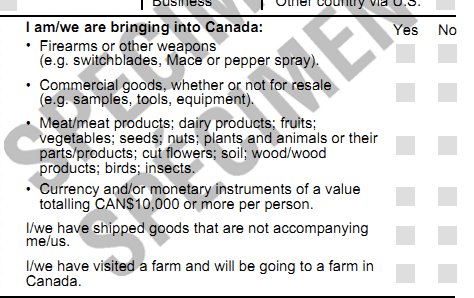 I've argued before that taken too literally this would require you to declare paper, wooden pencils and so on. I think, though, that noodles are going to be ok. There are phone numbers on the CBSA page that might help you if you need more confidence.

Also, just because you say yes doesn't mean anything bad will happen. When I came back from a Caribbean visit I had a conch shell. I had checked online and you're allowed one as long as you were the one who pulled it from the ocean. Since my husband had indeed done so (and I had a picture of that) I brought it back and declared it, and said yes to the animal parts question. The officer asked "what food?" in that bored customs-officer voice and I said "we have some seashells from the beach and a conch shell." He wrote SEASHELLS OK on my form next to that question and off we went.

Not the answer you're looking for? Browse other questions tagged customs-and-immigration food-and-drink canada or ask your own question.

4
Bringing home-dried vegetables into the USA
4
Bringing shrink-wrapped cheese through Australian Customs?
8
Is maple syrup a food under US customs law?
6
Can I bring food which is not recognised as safe through US customs?
3
Bringing food items into the UK (from Chile)
3
Taking fennel tea bags into Canada
6
Is there a rule against taking food through TSA security checkpoints?