I was reading a book when I was a kid about steam paddlers on the Mississippi, and a race between two boats from New Orleans to Baton Rouge. The story happened sometime between 1850 and 1900 as far as I remember and stated that quite a few ships ran aground or got stuck in the Mississippi during this time because the river changed its way across the landscape quite often, particularly after heavy rain upstream or flooding.

So my question is: Did they have steam ship races during this time on the Mississippi, and are there any beached steam ship wrecks left somewhere on the river that can be explored? 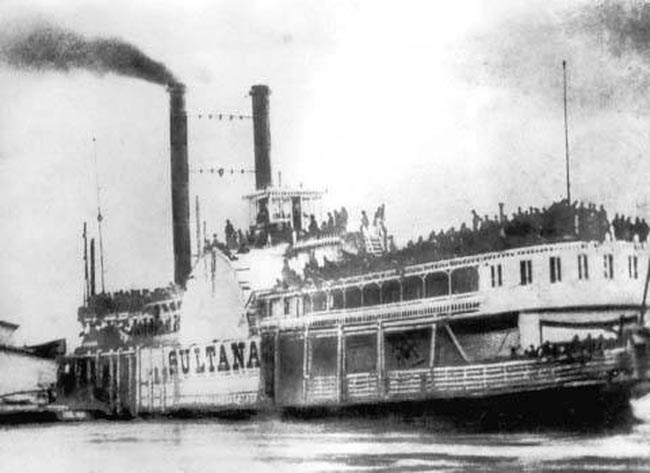 Picture of the SS Sultana

While Paddle Steamers still operate on the Mississippi river, these are tourist only; gone are the hey-days of hundreds of them churning up the river silt.

Historically, many of them blew up when their boilers exploded, others were wrecked in skirmishes, crashes, or being caught in battle. Possibly the most famous (and least noticed, as it happened just after Lincoln's assassination) was the SS Sultana, killing 1800-2400 people when one of the boilers exploded on the Mississippi river. The wreck still exists:

In 1982, a local archaeological expedition uncovered what was believed to be the wreckage of Sultana. Blackened wooden deck planks and timbers were found about 32 feet (9.8 m) under a soybean field on the Arkansas side, about 4 miles (6.4 km) from Memphis. The Mississippi River has changed course several times since the disaster. The main channel now flows about 2 miles (3.2 km) east of its 1865 position.

It's noted during the 1880s, at least, many wrecks lay on the river floor. However, as the previous quote illustrates, the course of the river has changed with time, so some are no longer on the river bed and presumably have been easily cleared away. Others would also be removed as they pose hazards to other vessels using the waterways, and others would have rusted away over time.

For example, one of the more famous ones was La Belle, or La Salle Shipwreck:

La Salle's French expedition of 1684-1687 tried to locate the mouth of the Mississippi River, but went too far, ended up in Texas where this 15 m long 6-gun frigate sank in shallow water in 1686. The lower part of the hull was found in 1995, excavated 1996-97, by draining the wreck area with a cofferdam. Conservation still continues.

As a result. it's dubious whether any wrecks remain, and if they are, they're almost certainly not "explorable", unfortunately.

While not a paddle steamer, one of the famous civil war boats was the ironclad USS Cairo, the wreck of which was discovered in 1956, and is now on display in the Vicksburg National Military Park.

Not the answer you're looking for? Browse other questions tagged usa sightseeing ships or ask your own question.

8
What are the practical implications for the flag of a ship?
6
What are the various types of tickets for Empire State Building?
3
Can the Walnut Street Prison be accessed?
18
What coast or river-adjacent city is in this photo?
9
Are you able to visit the ship breaking yards in Bangladesh?
66
How to avoid accidental trespassing while exploring rural US?
4
Visiting the port of Antwerp
1
River Thames Source and Destination Points
28
Is it possible to do a round-the-world trip by train and passenger ship only? Missing link for crossing the Pacific