What is the best way to carry photographic film when travelling?

Since I still shoot analogue photos, I often find myself travelling with photographic film. Film can be sensitive to X-ray machines, depending on the "strength" of the machine, the technology, the ASA rating of the film and the number of X-ray exposures it is subject to.

The general consensus online seems to be that one should carry film preferably in one's hand-luggage, since the machines used to scan hold luggage are stronger. Therefore I've always followed this advice, and I used to be able to get away with asking for manual inspection of film when passing airport security controls. However, this has been becoming increasingly more difficult. For starters if analogue photographers are an endangered specie, travelling analogue photographers are mythological creatures. This means that security officers are not used to dealing with these requests any more, and are probably not even trained to handle them. Moreover, I often have to force my way, and ask to speak to a supervisor, whilst the security officer tries to convince me that the machine is film-safe. This whole charade leads to longer check times (I'm OK with that and I always take the extra time into account) and pesky arguments with people who ultimately have the right to deny me boarding.

Incidentally what happened today at Luxembourg airport is that the security officers called the police, an armed officer arrived and bluntly told me "either check it in or have it go through the x-ray machine". He left no wiggle room for discussion. Another time at Milan Linate airport, the security staff told me "either scan it or you throw it away". This is a somewhat recurring pattern I've witnessed. Asking for hand inspection doesn't always work. My experience shows that in countries in which airport security is subsidised to private contractors, rather than handled by national/governmental agencies, asking for hand inspection results in film being scanned anyway more than it doesn't.

Here is the question then: in today's digital world, what is the best way to travel with photographic film if one expects multiple x-ray checkpoints and wishes to avoid unwanted exposures?

I'm also an analog photographer and I develop my film myself.

There's a few things you can do and as with anything it depends more on how you ask, but it's worth remembering that just like in your example if you hit a stubborn official somewhere there really is no way to go around scanning the film.

It also helps to know exactly how many scans will start to fog your film, that way you can "pick your battles" so to speak. Sometimes I'll let the film go through in a giant airport with huge lines and will insist on a hand-check elsewhere.

Develop the film on location.

Depending on your destination, you can probably find some local darkroom you can rent or maybe a charitable person who'll lend you there gear. On my last trip to Japan I met someone like that through an online photo forum. I've also met people who travel with their tanks and changing bags and develop in their hotel rooms.

There's a bit of unknown here because you don't know how postal companies process their packages, but you can also ship a box of film to yourself from abroad thereby skipping the entire hassle. Same applies before leaving, you can buy it at home and ship it to your hotel. Once, I labelled the package and when home it was clear customs had opened it manually, the film was fine.

Whatever you do, do not use those. If the operator sees a black invisible box in your luggage they'll just crank up the dose and you can be sure your film is toast.

Always unbox your film, if possible lose the plastic containers, put everything in a clear labelled ziplock. Basically, make it as easy as possible for them. Notify someone before your stuff is actually about to go in the scanner, that'll save some time. Apologizing profusely to annoyed people behind you doesn't work.

This one's tricky, if you have too few they won't bother taking out the equipment, if you have too many they won't want to spend the time. I've had mixed experiences with this one, best to be aware of it. On my last trip I had 60+ rolls, I only asked the officer to inspect the ones I had actually shot, he obliged.

I usually always push my film to 1600, personal preference. While most operators will insist their machine is safe until ISO800 I often pack a token 3200ISO cans in there, mention my film is either expired or pushed (therefore more sensitive). I also mention that on this trip the film's already been in the X-Ray multiple times and that while a single exposure is fine, multiple scans will definitely fog it. Again, doesn't always work.

I haven't carried silver film for a decade but back when I did the best solution I found was some clear plastic tubes meant for making film easy to hand inspect without having to open anything. Below is a picture of one such tube: 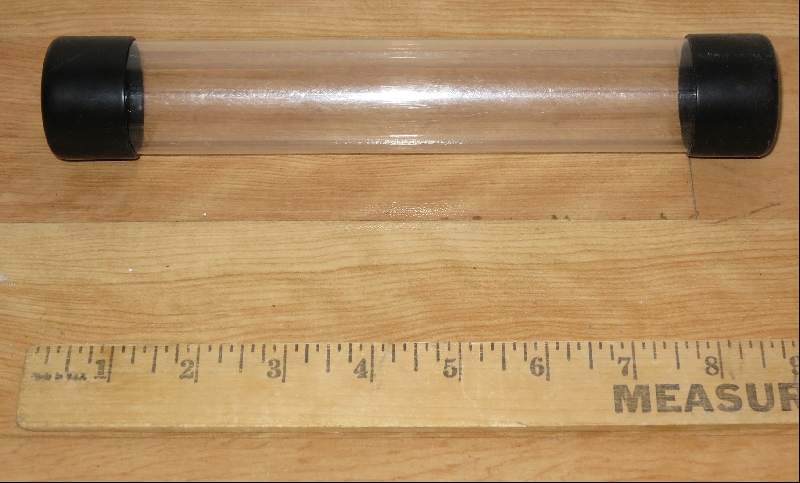 The tube can hold 5 rolls but I only put 4 so one can see the ends of the rolls without taking a cap off.

Kodak (people more familiar with film than most) have this handy page which they last updated in 2003(!) on film and x-ray machines:

X-ray equipment used to inspect carry-on baggage uses a very low level of x-radiation that will not cause noticeable damage to most films.

Of course, the obvious:

In short, its okay on carry on, in checked baggage its riskier. Over at photo.se they had a similar discussion.

Not the answer you're looking for? Browse other questions tagged legal tips-and-tricks security photography x-ray-machines or ask your own question.

22
How can one travel with X-Ray sensitive equipment or electronic devices?
5
Is it possible to request hand inspection of photographic film in Indian airports?

5
Where in Montreal-Pierre Elliott Trudeau airport are the millimeter-wave body scanners?
26
Why is security screening done at the gate in some airports?
7
Can airport security find a waterskin?
5
Does Istanbul airport have x-ray scanners before the exit?
7
Being a tourist, can I film police in the US?
7
Are body scanners mandatory at Charles de Gaulle airport?
22
How can one travel with X-Ray sensitive equipment or electronic devices?
5
Is it possible to request hand inspection of photographic film in Indian airports?