Banaue to Vigan directly without going through Baguio?

I want to leave Banaue (anytime after say noon) and get to Vigan as quickly as possible without spending more than say 800 php. A few locals I've consulted say the best way is to go back south to Baguio then go north again to Vigan. This seems to me an unfortunately and unnecessarily long detour. Is there any faster way of getting to Vigan? 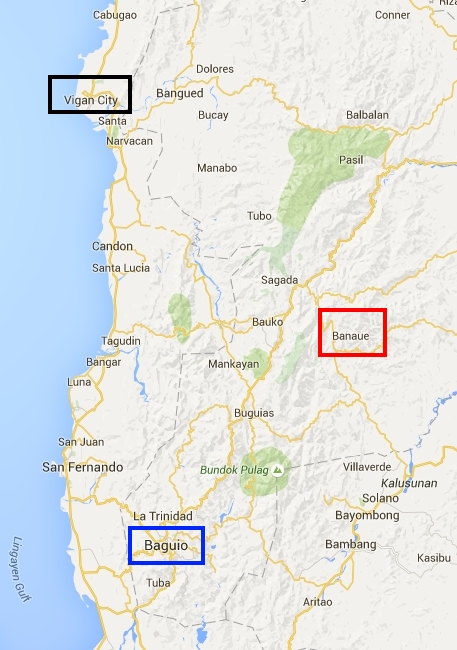 Yes. The goal is to keep heading west towards the PINK circle (map below), which is a town called Bitalag (north of a larger town called Tagudin). 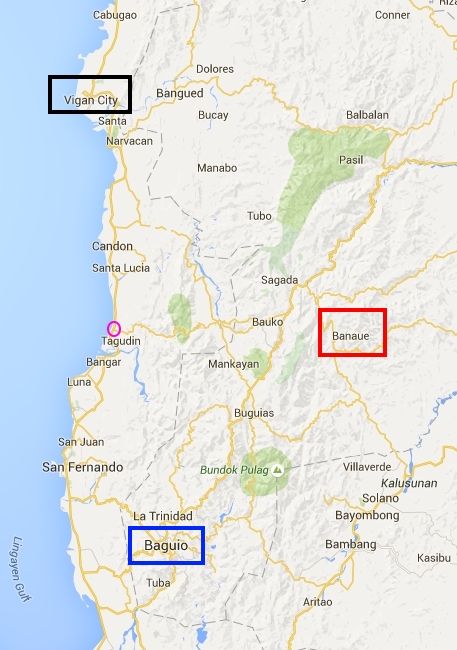 At Bitalag, you'll be on the national highway (the north-south road along the cost), so now just now just head north to Vigan.

Once you're at Bitalag and on the national highway, it's easy to flag down frequent, passing buses on their way to Vigan (and beyond). The slightly tricky part is getting to Bitalag.

Here is what I did on Dec 20, 2015, Sunday before Xmas. So my guess is that it shouldn't be hard any other time of the year either.

Total cost P589. YMMV for steps #1-#4, depending on whatever vans there happen to be as you get to each town. Just remember the goal is to keep heading west. Look at Google maps: after Bontoc, the towns are Bauko, then Tadian, Cervantes, Suyo, then Bitalag.

Duration? Optimistically: Perhaps 7 hours or less, IF you're very lucky and the vans always move the instant you get on board.

Realistically: 10 hours or so, as you'll probably spend a lot of time waiting for the vans to fill. You can bargain with the van driver to get going earlier for a fee, as two of us foreigners did for the Cervantes-Bitalag route - we paid an extra P250 each to induce the driver to get going (instead of waiting for the van to fill). I reckon that saved us perhaps an hour or two of further waiting.

But even at 10 hours, this will save you a lot of time, as compared to the usual recommendation that you go back to Baguio (usually an overnight bus) then go up again to Vigan (hence reaching only the following afternoon).

Not the answer you're looking for? Browse other questions tagged routes philippines or ask your own question.

16
Are there still any “cheap” options for flying from Australia to Mexico without going through the US?
7
Staying on the Nakahechi route without walking
10
Overland route from Southeast Asia (Malaysia) to South Asia (India, Nepal, or Pakistan)
26
Do airlines fly directly over the North Pole?
5
Is it necessary to book a hotel in advance in Baguio, Philippines during May/June?
5
What I need to know when going to typical (traditional) wedding ceremony in Philippines?
12
Which routes are possible from anywhere on peninsular Southeast Asia to The Philippines without flying?
60
To travel 30 km from India to Sri Lanka, do I really have to take a 1500 km, 20 hour detour?
1
How could I get to Jamaica without going through US