Is there a map that shows the walking time between London Tube stations?

Sometimes when gadding about in central London I am set back by a station closure or some other incident that requires me to find another station. In those cases I don't care if the station is on the same line (I can always connect to resume my journey), the paramount concern is walking time.

So what I am after is a guide to the London Tube that contains the average walking time from station to station.

While I am a London area resident the same issue confronts visitors; indeed, in the case of a visitor, their need is more acute because they have no clue about which tube stations are in the general area.

Question: how can I obtain a walking map of the London Tube system? While the immediate interest is London, I would love the same for other cities too (Birmingham, Edinburgh, and so on) if they exist.

Edit: Yes, I can use Google Maps to obtain the walking distance between two stations that are explicitly identified. But this drill must be conducted serially for each alternative. Also, given the situation, I would prefer hard copy because the net can be very slow in some places.

Well, what a coincidence. This was in the news today. 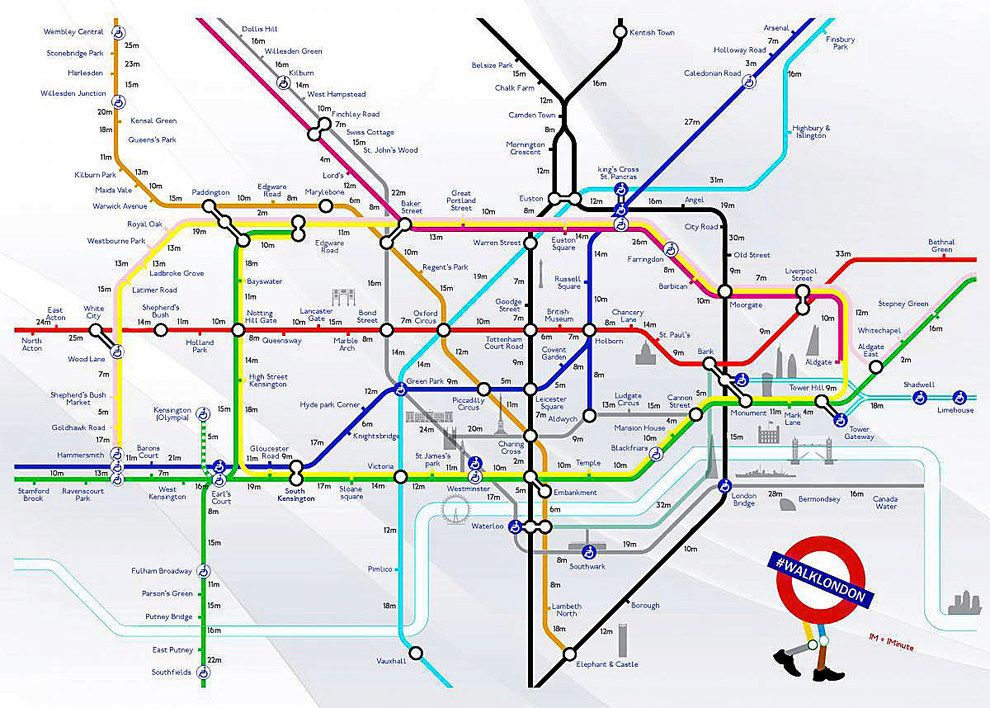 For a general offline case, get a paper street atlas of the city you're in, and learn what symbols to look for for their trains, metros/undergrounds, trams etc! For a general online case, much the same with google maps or similar. Maybe not apple maps, as covered humorously here

For London specifically, there are two maps that spring to mind. One has been in the news in the last few days, but actually builds upon a map that has been around for a little bit. There's an official TFL tube walking map, which shows the time to walk between stations along lines. It looks like this: 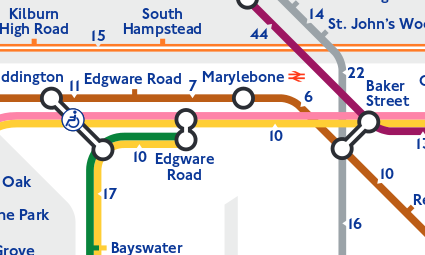 From your use case, that map might not always help. If one station is closed, it should be fine for walking to the next. If a line is closed, less so.

Dating from 2003, Rod Corp produced a map showing "walklines" between stations. This aims to show when two tube stations are within 500m of each other, and hence when it might be worth walking between them even though they're not joined on the map. Some, but not all of these are available as "outerchanges" (out-of-station interchanges). The 2003 map from Rob is available here on his site, and has the links marked like this: 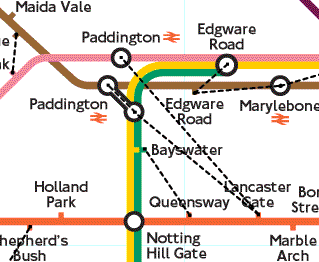 Otherwise, you'll need a Geographically Accurate tube map, eg the Official TFL London Connections geographic map, so you can see how stations really are located near to each other, eg: 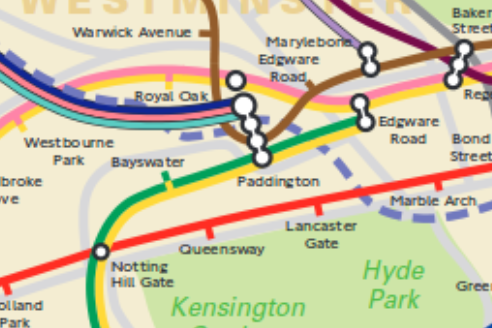 Using TFL's Journey Planner you can select Public Transport, Cycling or Walking, input the origin and destination and find out a very accurate estimate of the time it takes to walk, cycle, etc. between stations. You can even select slow, average or fast walking options.

It's not exactly a map, because it would be impossible to make a printed map that showed the walking time between every station, but I personally think it's far better than a static map.

Just click on the Travel options & accessibility link underneath the to/from inputs.

TFL now has greatly extended its walking coverage. The walking page links to four different version of the maps from the accepted answer above: Walking (steps / times) between Tube and Rail Stations (zones 1-3 / zones 1-2). And also it has Central London journeys that could be quicker to walk (these involve at least one station interchange):

Walking can be a quick and easy way to get around, particularly when travelling during the busiest times, which are 08:00-09:00 and 17:30-18:30 Monday to Friday. The table below shows some popular journeys within zones 1 and 2 that are quicker to walk

I never knew Great Portland Street and Regent’s Park are practically next to each other -- only two minutes or 200 steps.

29
What is the fastest theoretical route for the London "Tube Challenge"?
8
Interactive map for mixed bus-and-walking journeys in Greater London
14
Is there a website that tells me the quickest way between two London Tube stations?
23
Paddington to Euston with kids: minimum walking by tube or by taxi?
48
Is there a way to tell in which direction a London Tube train will pass the station platform?
27
Is there an updated PDF or other downloadable version of TfL's Legible London map?
32
How to plan a UK train route avoiding the tube?