Which motorcycles can I ride in the US with an Israel A1 license?

I might put it this way: if your license in your home country is sufficient to obtain a motorcycle ("A") rating on your International Driving Permit (and you carry your valid license along with the IDP), you should have sufficient documentation of your skills to operate a full-sized street motorcycle in the United States. If your license is in English and clearly indicates a motorcycle endorsement, that may be good enough in itself.

The IDP standardizes the various vehicle operator permits and endorsements from treaty countries into thirteen categories. 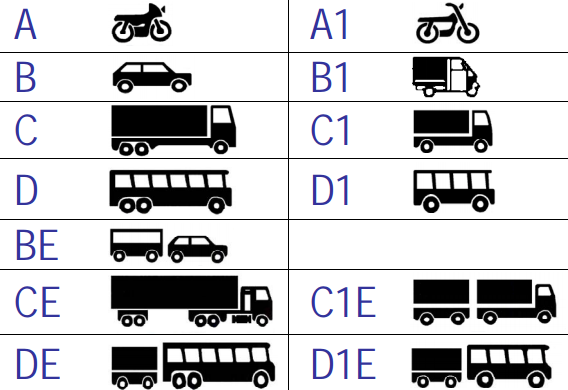 Since 2011, the relevant vehicle categories would be

There is very considerable variation from state to state on what the cutoffs are at the lower end— there is no standard definition of a motorcycle in the United States. If you can only get an A1 rating, therefore, it is possible that you would not be allowed to operate anything large enough to take on the freeway/expressway, which would make a coast-to-coast trip extremely difficult.

I'm not aware of any such separate licensing categories for larger or higher-powered bikes anywhere in the U.S. For good or ill, once you get a motorcycle endorsement here, it's good for a 3 hp street scooter and a 205 hp 1299 Panigale alike, and up to you to operate only as much bike as you can handle. The cutoff between a motorized bicycle and a motorcycle/"motor scooter"/"motorized cycle" is low, often 1kW or 0.75kW, and often based on engine displacement and wheel diameter in addition to or instead of power.

Standard warning: as licensing and traffic law enforcement are handled by the states, it is good to review the laws of every state you plan to operate in.

The American Motorcyclist Association provides a handy online summaries of state motorcycle laws. Note, for example, lane splitting and filtering are illegal in most states, and only explicitly legal in California. As a daily rider myself, I would also caution that motorcycling is rarer in the U.S. than in much of the world; it is largely considered a recreational activity. Like bicyclists, scooter riders, and truck and farm equipment operators, you are thus at the mercy of car drivers who are not very accustomed to you, and who may resent your presence on the road altogether— and of police who see a disproportionate amount of reckless joyriding on two wheels.

Can I legally drive a motorcycle in California with a New Zealand motorcycle license? answers California and it is likely the answer similarly is yes in other states. (But usual disclaimers apply)

Not the answer you're looking for? Browse other questions tagged driving-licenses motorcycles or ask your own question.