Does flying east to west generally take longer than west to east in America?

I noticed for a particular round-trip that the portion from the east coast to the west was scheduled to take over an hour longer than the return trip. I initially thought this was a mistake due to time zone or daylight-savings time oddities, but that does not appear to be the case.

I know there are a number of variables that can affect flight time (type of jet, winds, even potentially rotation of the Earth itself), so I was wondering if this sort of thing is typical. This particular instance happens to use the same model plane for both trips and is non-stop, so most factors seem to be controlled for aside from east-west vs. west-east. Is the longer flight a good candidate to arrive early (or is the shorter flight a good candidate to arrive late)?

Edit: I recognize from this question that winds are likely to be the dominant factor, but that still does not answer my question. I'm specifically asking about the USA and I don't know what sorts of winds are typical (or whether or not it depends largely on southwest vs. northwest, etc.).

As Mark Mayo's answer shows, wind is the primary determinant of the difference in speed.

The path of the jet stream is highly variable (its usually shown on weather maps, because it is the primary determinant of weather), but can be usually thought of as a U shaped curve that on average goes from say, Oregon, south to Texas, and back up to say, Pennsylvania. How deep it goes, and how far north or south it is on any given day, can be off by several states. That's also why flight times can vary so much from the printed value.

Much like others have said, my answer on another question serves to explain this.

However, to clarify for you, in the US you're looking for prevalent jetstreams to show the cause. 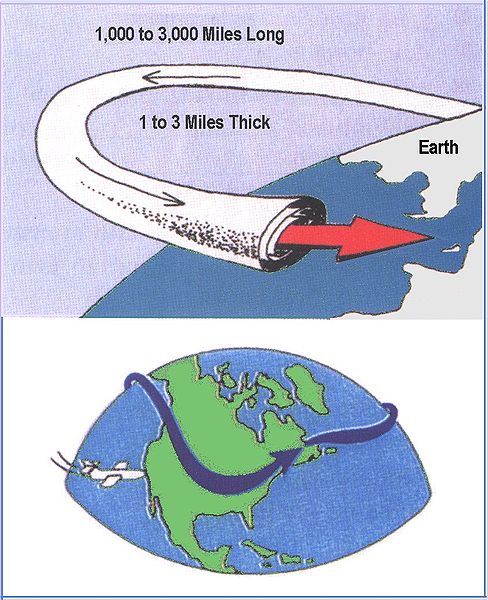 The prevailing jetstreams in the US flow from west to east in the upper portion of the troposphere.

You can also see a map here of all the prevailing jetstreams around the world.

The Jet Stream affecting the U.S. moves up and down across the continent. When it is farther north, say in Canada, the weather to its south tends to be mild or at least less cold. When the stream, which meanders, swings south until well within the U.S., especially in winter,very cold, often harsh weather prevails at the surface on the northern side. This diagram shows two typical positions at the height of Summer and of Winter.

Also note this LIVE amazing display of the prevailing winds in the USA, which affect all this.

And as you can see, the prevailing jet stream is from west to east.

Because of the way the earth turns (the sun "rises" in the east), there are prevailing winds going from west to east over most of the earth.

On a trip from the East coast to the west coast of the United States, the time difference between a tail wind (flying west to east) and a typical headwind (flying east to west) is about an hour.

Not the answer you're looking for? Browse other questions tagged air-travel usa factoids or ask your own question.

2
Why is a flight going west longer than the same flight going west to east?
21
Does the rotation of the earth affect the travel time from Europe to Australia?
1
Why are flights departing Athens shorter than their returns at night?
1
Flying around the world: Which direction is best?
2
Why is SCL-AKL slower than SYD-SCL?

87
How can I avoid or minimize jet lag?
9
How much does it add to a North America / Australia journey to go “the wrong way”?
25
Does the flight departure time take Daylight Savings Time into account?
16
Does the direction of travel matter for jet lag, when the time difference is 12 hours?
7
What's the least difference in longitude on a flight between a pair of IATA airports?
7
Why does it take longer to fly from London to Xi'an than to Beijing
22
Unexpected route on a flight from USA to Europe
14
Airline schedule flights to arrive at the same time its scheduled to depart
12
What's the shortest flight on which a full, complimentary hot meal was served to all passengers?