When travelling I normally hang out in cafes and pubs when working. Now lately I have had some problems with my neck so the laptop style of working is not ideal anymore. On a trip I have a laptop stand like this one. 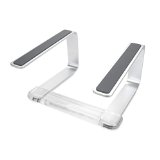 With this I get a better ergonomical work situation. I am not particularly keen on assembling one of these in a cafe or a pub and bringing external keyboard and mouse to go with it. In Stockholm there are quite a number of public libraries where it is possible to sit down and do a couple of hours (of coding obviously). What are my options in London for this?

The British Library is a popular choice. Huge, centrally located, free Wifi, spacious, also with lots to see (make sure you look at the Lindisfarne Gospels while you're there), cafes, and a nice outdoor area if it's sunny.

However, it gets very busy, and competition for a well-placed seat with access to a plug socket can be a bit fierce (by fierce, I mean British fierce, someone might raise an eyebrow and tut), and there's a bit of registration process.

Public libraries are still relatively common outside Central London, despite recent government cuts forcing some to close. Some are run by the council, some by public-private partnerships, so policies vary. Wifi is pretty common - but not necessarily free, especially for non-members. There may be limited desk space, too.

Here's a few lists - but the best bet is probably browse locally with something like Google Maps. With libraries so fragmented I'm not aware of any one site that lists them (you'll find more and better lists of libraries in London, Ontario than London, England):

A good non-obvious option is St Pancras Station. It's spacious, much less hellishly busy and noisy than other London stations, and the whole area has excellent free wifi. You can either find a bench or floor space, or (maybe better considering your back condition) make camp in any of the many cafes in the area. As a public space, you can go very early and/or stay very late (just remember that as a public space thousands of people go through, you should be extra-vigilant against opportunistic theft).

If you don't mind paying, London has lots of initiatives for co-working spaces, many of which charge per day (some are more long-term arrangements). Some are free, but these almost always have some kind of application criteria and long-term commitment required (for example, Camden Collective).

I won't list them because they're constantly opening, closing, going bust, relocating, changing name, changing policies... But CoWorkingLondon.com tries to keep track of them all.

There's also a site, http://worksly.com/ that lets you find Wifi "Workspaces" (usually pubs and cafes) near any UK post code.

Not the answer you're looking for? Browse other questions tagged london work or ask your own question.

4
Accommodation options in London for three months in summer
6
What are my cellular options in London
6
Is there somewhere I can work on a laptop in or near London Euston station?
5
"Park and Ride" options to visit London?
12
What is the closest free street parking to London city center?
8
Where can I find a decent place to do remote work in Addis Ababa?
1
London Heathrow: What are the options while waiting for hotel check-in?
34
How does the Central London transport system work?