Where from can I catch the copenhagen zoo snake bus?

Can anyone tell me where I can catch the copenhagen zoo snake bus in order to go to the zoo. Is it possible to catch it someplace close to the center ? 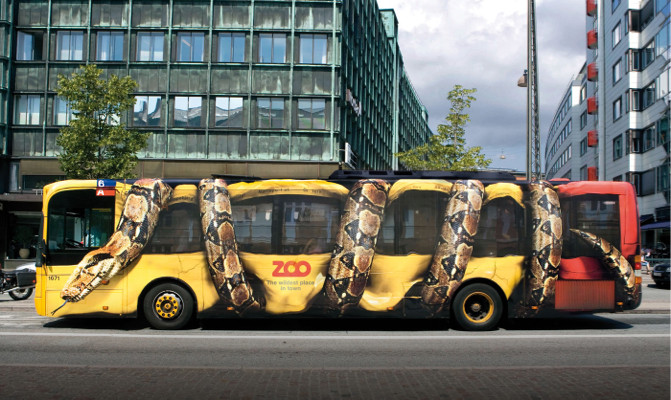 The depicted bus is not a special "snake line", but an ordinary bus on line 6A which is fancifully decorated as a full-exterior ad bought by the zoo.

Line 6A does go from the city center to the zoo -- there are several stops in the city center, such as at Nørreport, Rådhuspladsen, near Vesterport in front of the "Palads" movie theater, and nearish the central station (diagonally across the intersection from Hotel Astoria to the northwest of the station). You'll want the direction with destination "Rødovrehallen".

You won't be able to get a ride in a snake-decorated bus, though. The ad campaign ran in 2010, and the involved buses have long since been returned to normal livery or other ads.

7
The best way to get from Stockholm to Kolmården zoo by public transport
2
Can I get a bus from Vang Vieng, Laos, to Chiang Mai, Thailand?
4
Ijen crater and batu secret zoo from Surabaya
1
Can I exchange Euro notes to DKK in Copenhagen (airport)?
15
Can you buy train tickets online for the Copenhagen to Malmö route?
3
Public bus from Salta to Los Castillos
2
Is it possible to buy a 24-hour ticket at Copenhagen airport in advance?
9
Where does the international bus from Yerevan to Tabriz drop passengers?
3
Arrival at Schipol airport at 6 am from close to Kronenburg tram stop?