I am planning a trip to Austria in September for myself and my wife (both Canadians). The rough plan is to spend 7-8 days, and we'd like to visit Vienna, Salzburg, and Hallstatt.

So far I am thinking we can fly from Toronto to Vienna, stay a few days, take a train to Salzburg, rent a car or take a tour for the day to visit Hallstatt, and eventually fly from Salzburg back to Toronto.

While in Salzburg we want to visit

Is all of this possible in 7-8 days? We don't have any plans for Vienna, is it worth spending a few days there, or will Salzburg take too much time? Are there any must-see items we're missing in any of these locations?

Finally, we plan to be leaving Vienna as Oktoberfest is starting; will this make finding accommodation difficult, or make it harder to book train tickets? Do we have to book our whole itinerary in advance or will we have flexibility to book hotels once we arrive and firm up our plans (i.e. maybe spend more or less time in Vienna)?

In my opinion, 8 days are fine to visit Vienna, Salzburg and Hallstatt, but you'll have to speed up a bit to visit the main attractions.
I recommend you this route: Vienna-Salzburg-Hallstatt.

Spend at least 3 days in Vienna. This city has one of the biggest cultural offers so, even a 3 days time visit won't be enough. Visiting "the Ring", Vienna's city center will take a whole day. You should start in the Hofburg palace, visit the museums held inside and go around the city centre going through the Stephansdom, give a round walk through the "Ring" (where the City Town Hall is located, The Parliament, Volksgarten, the Main University and so on) and go to the Staatsoper in the evening. Next day go to the Belvedere palace and museums (where the famous Klimt's "The Kiss" is shown and in the afternoon go to Museums Quartier and visit "the twin museums" (Naturhistorishes and Kunsthistorishes museum). You should go to the Schönbrunn Palace on the third day and spend the afternoon going to the Satdtpark, KunstHaus Wien and finally go to the Prater to ride in the well-famous Risenrad.

It will take exactly 3 hours by train from Vienna to Salzburg. You can check the schedules here

You'll need 2 days to visit Salzburg. Don't miss reaching the fortress of Hohensalzburg in the funicular. It will take 4-5 hours to visit. In the afternoon go to the cute city center (the Cathedral, The "Residenz"...) and walk along the river to get to the Augustiner brewery and have supper. Mozart's birthhouse is not to my taste and not worth visiting. The Resident and the Fortress hold the main museums in Salzburg, so you can skip the rest of the museums and spend more time walking along the city centre.

Hallstatt is easily reachable from Salzburg by bus and train ( see here ) but will take at least 1 day journey. Is the same case as going to the Eagle's Nest (Berchtesgaden, Germany) (link). I'd recommend to book your accommodation in Salzburg since it's difficult to find a non-expensive accommodation in this towns

As previously said, you won't find any difficulties for booking your hotel in Austria due to the Oktoberfest. Nevertheless, I will strongly recommend to do it in advance and make sure if your stay can be extended asking directly to the hostel, since the policy of each is different.

My advice to you would be:

Don't do this in the time frame you described.

Consider this. You want to visit 3 cities, where there are lots of places to see and at most without rushing through you will be able to do no more than 2 in a day, so if you will spend 1 day in Hallstatt, 3 days in Salzburg, and 3 days in Vienna, you might be able to visit the places you plan but you will be tired and have no time for the travel. Vienna-Hallstatt is about 4 hours with 2 transfers (guys in Europe correct me if I am wrong here), Vienna-Salzburg is 3 hours. So basically running all 3 cities you will lose at least half a day on travel.

I would suggest going to Vienna or Salzburg, and spending a week there, this way you will be able soak up the culture and atmosphere and then plan another trip there.

As far as Oktoberfest is concerned I am not sure that it will affect Austria as much as it does Munich. When I was there at the Oktoberfest the situation was as follows: Hotels are booked 8+ months in advance and going rate during Oktoberfest is 3x the normal rate(and that's official Oktoberfest rate) so I'd look at what is being offered right now.

The schedule is indeed a bit tight, but no reason for not visiting Austria ;-).

I would divide the time equally between Vienna and Salzburg, or even spend a bit more time in Vienna. There are plenty of things to do and to see.

If you want to get the most of this 7-8 days, arrange everything beforehand, i.e. booking trains and hotels. This will allow you to fully concentrate on the "essentials".

Also note that "Eagle's Nest" is located near Berchtesgaden (Germany), some 30-40 kilometers from Salzburg. It can be reached by public transport. This visit will take at least half a if not a day.

Vienna ist definitely worth spending at least as much time on as Salzburg, and I agree with Karlson that your schedule is a bit tight.

Oktoberfest will definitely not have any noticeable effect on hotel availability in Vienna, and probaby none in Salzburg either. Booking hotels in advance has the advantage of saving you time and hassle during the actual vacation, and reducing the likelihood of making a bad choice. But it's not strictly necessary. An intermediate option might be to book in advance but ask whether you can change the length of your stay free of charge; this should be possible with most hotels up to one day before the actual date.

I went to Vienna and Salzburg a year and a half ago (and it was great). I recommend staying in Vienna longer than in Salzburg, because there is much more to see. Get a good travel guide/book and follow Sergio's excellent summary. I agree with Karlson that Sergio's schedule is very tight: if you want to be able to relax and stay a little longer at certain places, cut out 1/3 to 1/2.

If you're going from Vienna to Salzburg, I recommend visiting the Abbey of Melk (no, not Downton, though it look a bit like Downton, actually). It is on the route: you will only lose about 45 to 60 minutes if you go via Melk. The Abbey is a 15-minute walk from the train station, and it is one of the most glorious monasteries of Europe. Of course the high-baroque architecture borders on kitsch, but it is still well worth it. The gardens are a great place drink coffee. A picture from afar: 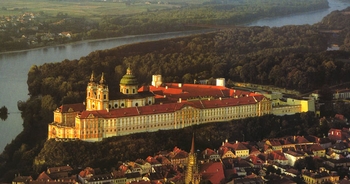 What made the biggest impression on me in Vienna was the imperial crown of the Habsburgs (in the Hofburg museum), dating from ca. 950, I believe. The grand, harmonious, 18th/19th-century palatial architecture all around is perhaps the most distinguishing feature of the city: it's almost as harmonious as St. Petersburg—but then you get some great mediaeval architecture in return.

The food was good. We mostly ate in random medium-priced restaurants with international/French cuisine: all very good, no worse than Paris. We also tried a small, laid-back, cheap, traditional Austrian restaurant, but the boar there was horrible. Oh, you must eat a Sachertorte at the Sacher Hotel near the Opera: best chocolate cake in the world.

I prefer travel guides that show you how interesting each spot is compared to others: the Guide Vert by Michelin gives 0–3 stars to everything mentioned in the book, which is extremely helpful to get a quick impression of what there is to see. Of course you will like certain low-starred items too, depending on personal preference. Their starred maps are also great. An random example: 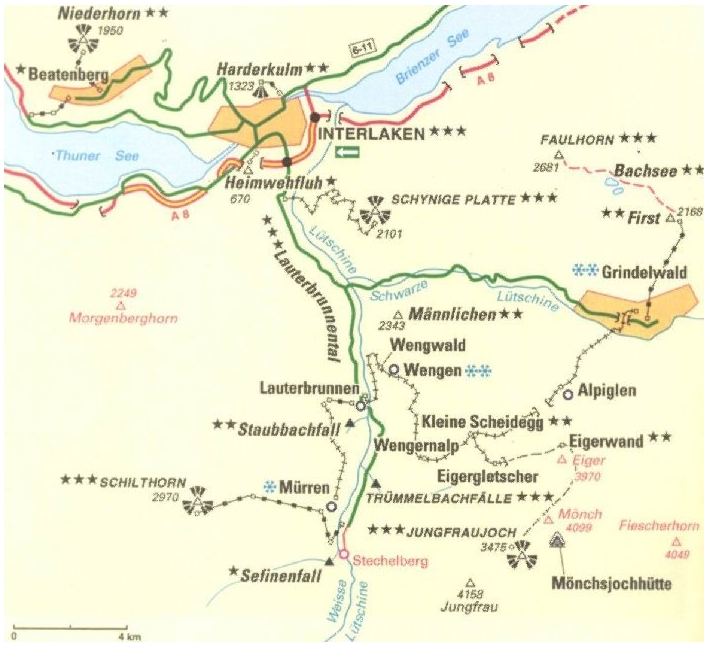 The Guide Vert of Austria has special starred maps of the centres of Vienna and Salzburg, of course.

In Vienna, I would definitely consider

The train connection between Vienna and Salzburg is very good (as mentioned by Karlson, Travel time should be about 3 hours) but Hallstatt is a bit remote. Hallstatt is the one thing I would consider skipping if your schedule feels too tight.

Westbahn will be half the price from Vienna to Salzburg then Austrian national railways ÖBB.

Not the answer you're looking for? Browse other questions tagged itineraries austria vienna or ask your own question.