Is it still possible to find mileage run flights and if so, how?

I need about 8000 miles by the end of the year to retain my Elite status with Turkish Airlines Miles&Smiles (and consequently my Star Alliance Gold level). In my mind, spending some money to do a mileage run is worth it because I make good use of lounges and the other benefits.

However, in trying to look for how I can go about finding a mileage run, I've run in to a few articles:

Some notes about the above articles:

I'm wondering if there are any flight search engines that have something along the lines of a cents per mile counter?

In general, is there a dedicated tool (apart from forums and deal sites) for finding mileage run flights?

Mileage runs are absolutely still possible, it's just a lot more complicated than it used to be and there's no easy way to find them. For example, a simple "cents per mile" counter is useless these days, because almost all airlines have switched to awarding different amounts of miles for the same flight depending on the fare class, not to mention the byzantine complexity of different frequent flyer programs counting and awarding miles differently, bonuses for people who already have status, promotions etc etc, and the remaining deals are often found at the intersection of these. Following a specialist forum like FlyerTalk remains your best bet for finding good deals.

As an example, "Visit Japan" fares for any domestic JAL flight in Japan can be had for ¥10,000 a pop (actual value up to ¥45,000), which is great value in itself, and the cherry on top is that these award full miles on most oneworld frequent flyer programs -- but you can't even book Visit Japan fares online, so it's not even theoretically possible to construct an engine that can find this.

What would kill off mileage runs for good is switching to a simple "1 mile per $1 paid" scheme. As discussed in one of the articles you link to, airlines all over the world are increasingly moving in this direction; for example, for years now, Singapore Airlines has only awarded its highest status ("PPS") to people who spend at least S$25,000 in cold, hard cash per calendar year. As far as I know, while nobody has gone whole hog yet, I suspect it's just a matter of time until this happens, and a lot of hotel award programs already operate on this basis.

And a personal opinion: I fly enough that doing more of it purely for Internet airline points has always struck me as silly. There are easier ways to both optimize point collection, like choosing your credit cards carefully and maximizing usage, and to get the most out of the points you have collected. There are some absolute gold mines to be found in the award charts.

Check out https://concorde.io to find mileage run deals, either through our deal feed or via our worldwide flight search tool.

Disclosure: I am the creator of Concorde.

Not from OP: An example of some of the details provided (courtesy Concorde!): 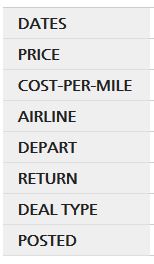 Not the answer you're looking for? Browse other questions tagged loyalty-programs star-alliance or ask your own question.

9
Can I use Korean Air's mileage for Delta domestic flights?
12
How to find an appropriate frequent flyer program?
2
What is the difference between Saver and Standard awards on United Mileage Plus?
5
If a program is registering me for my hotel stay and paying for it, could I still use those nights for a rewards program?
1
How far in advance do Qantas release reward flights?
1
Joining and getting miles for prior flights?
8
Is it possible to use one frequent flyer program for status and another for earnings?
6
If I credit miles from my United flights to Singapore, can I still use the United app + precheck?
4
Is it possible to have different frequent flyer numbers for different flights on the same reservation?