I'm a little confused with this. I know it will be discontinued in 2016 after Shinkansen arrives to Hokkaido but I'm not sure if it's running now or not, and if so, how reliably it's running.

JR Hokkaido has a pdf about Tokyo-Sapporo routes that mentions the Hamanasu but I'm not sure how to read that, is it running only 3 days in October ? (Can't copy paste from the pdf)

Hyperdia doesn't list it as an option. (I've even tried explicitly between Aomori and Sapporo, but then again it doesn't list Cassiopeia either) 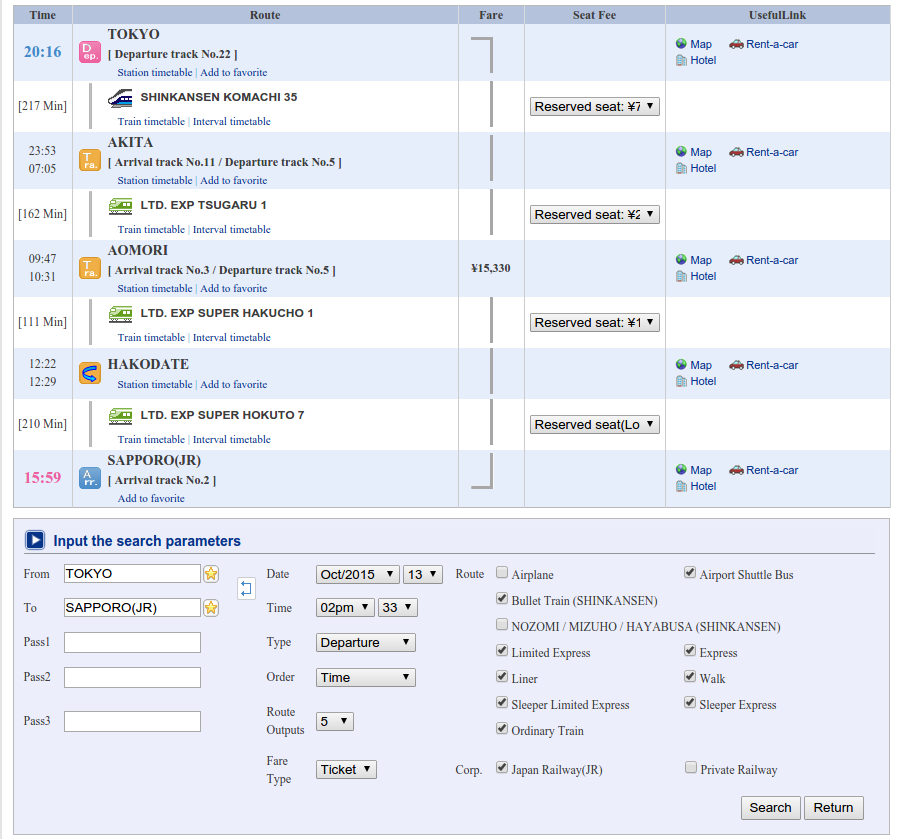 JPRail however, says that it does and the impression I get is that it's more frequent than the JR PDF suggests. (Article dated Aug 2015) 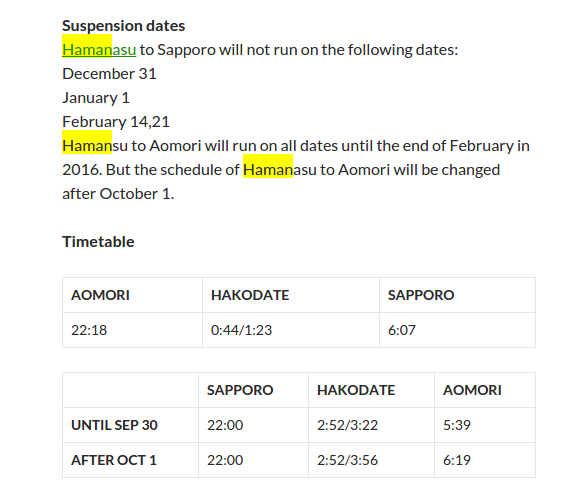 The Hamanasu runs every day. As indicated at the bottom of the page on Hyperdia, it is presently current only up to September 30. If you do a search on or before September 30, the Hamanasu appears. Also, in order to go to Aomori from Tokyo, you need the Hayabusa.

EDIT: Hyperdia has been updated yesterday (September 29), and now the Hamanasu does appear with the search settings in OP plus the Hayabusa.

According to the PDF:

PDF does not mention New Year period as it shows only schedule until Nov 30th.

PDF also does not mention shorter stop in Aomori until Sep 30th. I checked current schedule and it shows 6:19 arrival today, so it seems PDF is accurate.

Not the answer you're looking for? Browse other questions tagged trains japan japan-rail or ask your own question.

10
Is there luggage storage at train stations in Japan?
8
Japan Rail Passes, will I need one?
6
Booking a JR Shinkansen train ticket in Seoul
10
How to purchase Japan train tickets online and also Japan scenic itinerary?
5
What can I do to get train tickets for fast trains in Japan cheaper?
15
How to tell where train doors will stop in Japan?
5
How difficult is it to travel with a yumi (longbow) in Japan?
15
Are there differences between Japan Rail pass vendors?
9
Cassiopeia Sleeper Train Japan - Tours?
12
Do I need to disembark when crossing a Japan Rail pass zone boundary?