Raft trip down a river

As many of you may already have figured it out from simply reading the title, the inspiration to undertake a raft trip came to me when I first read Huckleberry Finn many years ago. I am a young adult now, but the idea still fascinates me and I very much want to go on a river trip in similar fashion to Huck and Jim. So I am looking for a river that satisfies the following criteria:

So why not simply choose the Mississippi? An answer on this very site recommends against it. Therefore I am looking for an alternative river on which a journey such as this would be feasible. I know stack exchange sites demand that users ask questions that are as specific as possible and I tried to make my question as narrow as possible. I am open to any suggestions to make this question better.

Canada has hundreds of rivers suitable for your trip in most ways.

Canada, especially Northern Canada, is famous for its waterways, and for Canadians navigating them in one way or another. Of course the most normal way to do it is by canoe or kayak, but there is as far as I know nothing to stop you using a raft if you feel like it. In fact, depending on your definition of 'raft', many groups organize trips on them.

In Northern Canada (by which I mean anything more than about 100km from the US border!) you will have no trouble finding rivers that are navigable, allow rafts, have no commercial traffic,and take a trip of a week or more. Finding a town will be a bit more tricky, although most will have settlements at least somewhere along them. Those settlements will certainly give you a different cultural experience, even if you are born and bred in Canada. If you want a real adventure, go to the far north - any of the rivers emptying into the Arctic. That's all of Yukon, NWT, Nunavut, and the north of the big provinces.

I'm not sure how you were planning on getting your raft - most outfitters are geared for canoes and kayaks, which are going to be better in the whitewater you are likely to encounter at some point, and in the portaging you will necessarily have to do. You might persuade them to outfit you with an inflatable raft. I suspect this is going to be your major difficulty, wherever you go. I assume you were not thinking of cutting down trees and making one.

If I might make some suggestions of trips I'm personally aware of:

P.S. If neither 'raft' nor 'river' are essential to the experience, but just a water-bourne adventure - or you feel the need for a 'warm-up' trip - I strongly recommend canoeing any of Canada's national or provincial wilderness parks. Algonquin or Killarney are ideal for Ontario, but there are others in every province. it's surprising how little you have to travel to get a real wilderness feel.

P.P.S A raft would absolutely not be the ideal choice for this trip. They are heavy, hard to portage (a 'portage' is where you have to carry your boat because the river is too shallow or too rocky), less controllable, vulnerable to rocks, less good at carrying loads, slower, harder to refloat or right, etc. A canoe will easily carry 2 people and the gear you need for a week's trip. There is a reason canoes have been watercraft of choice in this region for the last five hundred years. And the difference in the experience of floating down a river in a canoe and floating down in a raft isn't that much.

Scandinavia (Norway and Sweden) are well suited for this type of activity, with large areas of wilderness yet with some dispersion of villages. However, few rivers in Norway are navigable across long stretches.

Klarälven in Sweden, however, is well suited to the type of raft journeys you propose. It even has several operators offering packages, including rafts; one random such operator can be found here. Not much in terms of "cultural diversity", though. And "several weeks" is probably out of scope. I did Sysslebäck to Edebäck in the 1990s over the course of a week or so (organized independently); according to Google Maps this is a distance of 85 km.

This is surely not the most spectacular such journey in the world, and Sweden is an expensive country. However, if one is not capable of organizing everything oneself this is a convenient and safe option for such an "adventure".

I would suggest that the Potomac River meets several of your criteria. Up river is very rural, it passes by Washington, D.C. and ends in the Chesapeake Bay. You would pass by quite a variety of cultural styles.

Harper's Ferry, WV would be a good place to put in for a week long trip - further Northwest for longer trips. You can stock up on food and gear as well as take in the local history.

Before getting to D.C. you would have to portage around the Great Falls which is a nice place to do some easy hiking, rock climbing and see the C&O Canal.

Of course D.C. has many great places to visit and Old Town Alexandria just across the river has a great vibe.

Further down the river you have some very nice suburban homes and further down it gets rural again - but different from the up river rural.

Up river there is very little commercial traffic. You might have some company once getting past D.C. but not very much - mostly recreational.

The Connecticut River might suit your needs; it travels from the more rugged & remote parts of New England through some of its larger population centers (Springfield and Hartford). As one of the major rivers in an area that was settled before the automobile, it has a large number of towns along its length. Conversely, the fact that it has a wide and heavily silted mouth means that there is not a huge amount of shipping on it today — ocean-going vessels generally can't get up it, and there is not a major city at its mouth. (Old Saybrook, CT is at the mouth, with a population of only about 10,000.)

The above link leads to advice on doing exactly what you're describing in the upper river (Vermont & New Hampshire), and provides some references to off-line guides on how to do it for the lower river as well (Massachusetts & Connecticut.)

The mighty 1800km (1130 mile) Mackenzie river is one that might suit your purposes. It's not for the faint of heart- a sat phone and survival training would be advisable, and proper research is essential. 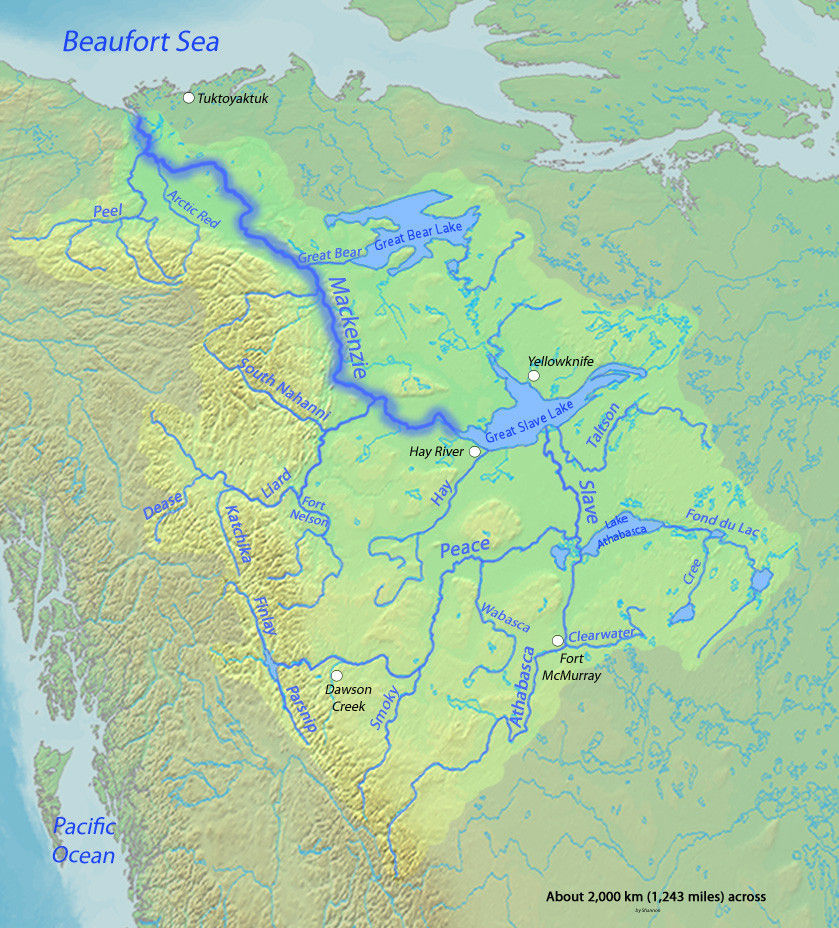 Most Canadians never get an opportunity to visit the far North- Inuit culture etc. The river empties into the Beaufort sea near Inuvik and Tuktoyaktuk on opposite sides of the delta. Daylight will be 24-hours.

Expect costs to be high, everything in the North is expensive.

Not the answer you're looking for? Browse other questions tagged planning adventure riverboats rivers or ask your own question.

6
Inner tubing down rivers in the United States

8
What is the most effective advice to avoid/minimise risk of illness when travelling in Africa?
2
Cruise on Douro river. When is the best time, and the desirable time extension?
20
Overview (map) of Russian long-distance river regular passenger ships in regions too remote for roads or railways
6
Inner tubing down rivers in the United States
9
River swimming near Chinon in France's Loire Valley
3
Is river travel to Vientiane and Phnom Penh recommended?
11
Is the Han River in Seoul clean enough for kayaking?
4
Can I take a boat down the Mosel river from the vicinity of Trier to Koblenz
5
How does pricing on the Amazon River boats work?