OK we're all nerds here, so really, how on earth should I use a Japanese toilet?

OK so for anyone who's traveled to Japan you know what I'm talking about.

They're devices that are a textbook example of excessive featuritis.

But I want to use something other than the flush knob before leaving Japan. What is a feature that has the following characteristics: 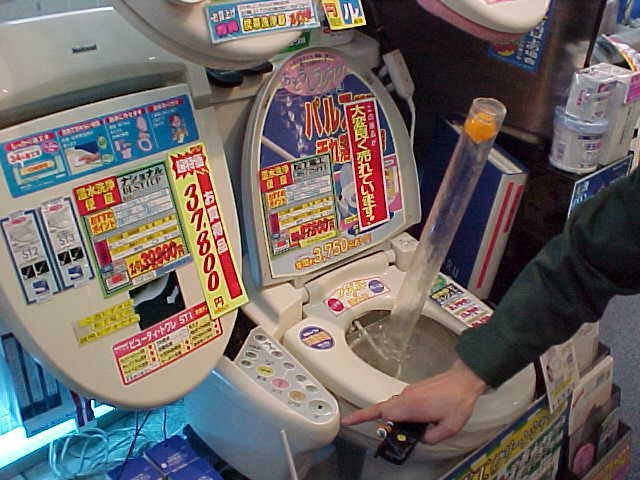 Wikivoyage tells you all you need to know -- and I'm going to quote most of it, since I originally wrote the entry!

Don't panic — help is at hand. The first key to solving the puzzle is that the actual flush mechanism is usually not operated by the control panel: instead, there is a standard, familiar, Western-style lever, switch or knob somewhere and it is thus entirely possible to take care of your business without ever using the washlet features. (In rare cases, mostly with very high-end gear, flushing is integrated; if lifting your bottom off the seat doesn't do the trick, look for buttons labeled 大 or 小, meaning a big or small flush respectively, on a wireless control panel on the wall.) The second key to exploration is that there is always a big red button labeled 止 on the panel — pressing this will instantly stop everything. Older models simply have a lever nearby that controls the flow of a sprayer.

Armed with this knowledge you can now begin to dig deeper. Typical controls include the following:

Oshiri (おしり) - "buttocks", for spraying your rear - typically shown in blue with a stylized butt icon; this action can be unnerving, but travellers should not be afraid - by the second or third attempt it will seem normal

Kansō (乾燥) - "dry", for drying off when finished - typically yellow with a wavy air icon 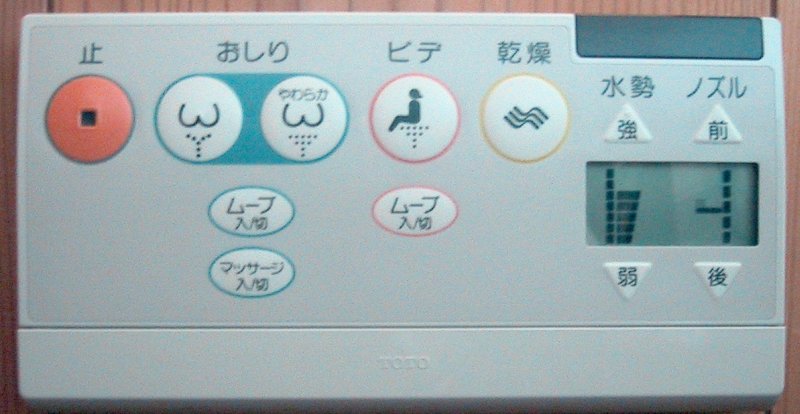 Other, smaller buttons can be used to adjust the exact pressure, angle, location and pulsation of the jet of water. Sometimes the seat of the toilet is heated, and this can be also regulated. One explanation is that since houses are not usually centrally heated, the toilet business can be made a little more convenient by heating the seat. To be polite and save energy, you should leave the cover down on heated toilet seats.

And if that wasn't enough, Wikipedia tells you way, way more than you need to know.

It worked for me!

Ignore it. Ignore it all. Treat it as decoration. The all important flush lever is on a separate system. You can usually find it on the side of the cistern.

Some toilets have a lever that you can move in two ways. These are marked with two symbols: 大 and 小. You see how the first symbol (大) looks like a man standing with his arms outstretched, as if to say, “It was this long!” That symbol mean big flush. The other symbol means small flush. That’s all there is to it.

Not the answer you're looking for? Browse other questions tagged japan tips-and-tricks local-customs hygiene or ask your own question.