A local NGO that is working with Togo is going to organize a convoy (2 trucks) to bring some educational and medical aid. They will enter to Africa through Tangier, Morocco and are going to drive to Togo. What's the safest route possible? Also if you know some tips to make it safer, it will be very helpful.

Fortunately, there are experienced travellers who have done these sorts of trips in the past.

The various roads in Africa sometimes form together to make the Trans-African Highway Network. When possible, using these would be optimal as they'd be more serviced, more frequented, better condition roads, and arguably safer. 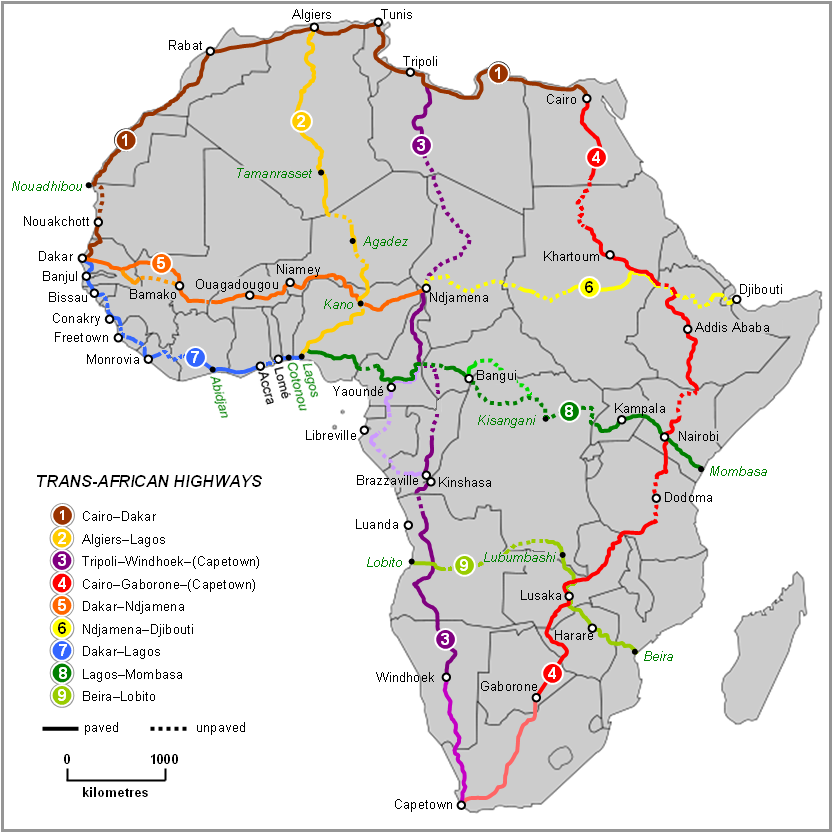 You'd be joining Route 1 initially, down to Dakar. A mainly coastal route continuing down the Atlantic coast of North-West Africa; substantially completeTAH 1 joins with TAH 7 to form an additional north-south route around the western extremity of the continent.

You'd be continuing on this TAH 7 route, also known as the Trans–West African Coastal Road, which is about 80% complete. Roads still exist in the incomplete stages, just not necessarily of highway standard.

This should take you all around to Togo.

The other option is Route 2 down through the desert. This is probably faster and would have less border problems - except for one big one - the Algeria / Morocco border is currently closed. This leaves you with the only realistic option being to head down the afore-mentioned coastal route.

Not the answer you're looking for? Browse other questions tagged safety driving routes africa tangier or ask your own question.

19
Maps with road drivability grading
9
Transporting (not riding) a tandem bicycle from Tangier to Essaouira
2
Safest driving route from Dunedin to Queenstown, NZ
20
Is there a “safest” route through Pakistan (from China to Iran)?
2
Best road route from Córdoba to Mendoza, Argentina?
8
What is the quickest route to Nioloko-Koba National Park(Senegal) from Gambia?
20
Need help identifying/translating a plaque in Tangier, Morocco
4
From West Africa to Tangier by ferries