So for a particular hotel on expedia.com I can "pay online now" $374 or I can "pay later" $374 (approx). The following screenshot better captures what I mean: 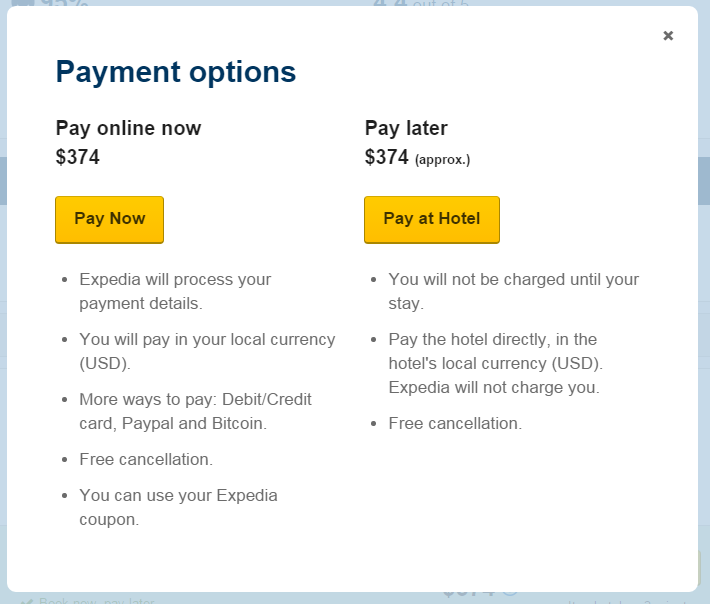 My question is... why is pay later an approximation whereas pay online now isn't? If I pay later would I essentially be paying at the same rate I'd be paying at if I tried to book the hotel same day (which would be quite expensive, I'd imagine)?

The price you pay at the hotel through their "pay later" option will be the same price that Expedia quotes you when you make the reservation. You will not be charged their walk in rate.

Chances are the verbiage "(approx.)" is hard coded into their html and shows on all bookings like this regardless of currency. But it is there because exchange rates can change between now and when the hotel actually charges you and large percentage of Expedia's bookings are cross border (either hotel location or customer location).

Not the answer you're looking for? Browse other questions tagged hotels expedia or ask your own question.

6
Pay 16% tax at hotels for tourists?
1
What happens to Expedia Pay later non-refundable booking in case of no show?
71
Why do some hotels ask you to leave the key at the reception when you go out to come back later?
3
Pay with a different card when using the Pay Later function on Expedia
5
Expedia hotel reservation status - Booked vs. Confirmed?
46
Can a hotel cancel a confirmed reservation?
3
How do I book and pay for a ticket for my daughter on my Expedia account?
18
Will the price change on Airbnb if I provide my ID later?