How to visit Wieliczka salt mines and the Auschwitz KZ from Krakow?

I'd like to visit Wieliczka salt mines and the Auschwitz KZ. Is it possible to visit both places the same day? How much time should I stay in each place? What trains/buses have to take from central Krakow? Also, I'm wondering if it will be cheaper and more cost-effective to join to an organized group or do it on my own?

It's possible to do both in one day, but I wouldn't recommend it - it's a lot to take in, and makes for a very long day. There's so much to see in Krakow old town, that it's worth spreading them out and spending your down time on a city tour or just walking around trying random foods in old restaurants or seeing the performers in the main square, or just sitting in the parks.

What I did can be read on my blog, so I'll include the links:

They are run by Cracow City Tours, and were pretty reasonable.

Now, the reason I suggest a tour. For the mines, you'll find that as an individual it's possible to get out there (see Wikitravel for bus numbers and directions), but then you'll have to find a tourist group to latch onto, as you can't explore them on your own. Also possible, you just have to ask around.

For the Auschwitz and Birkenau tour, it's one of the most depressing (but important) tours to do, and personally, I found it better to make some new friends on the tour to have someone to talk to about it. We had an Israeli guy with us who'd had relatives at the site, and that was really interesting. But it's quite a moving place, and I'm glad I didn't do it alone, to put it simply.

Also really recommend Greg and Tom's Hostel, by the way - 3 min walk from the train station!

Well, I would like to present some different, than Mark's & Piotr's, point of view. You have plenty of time, so you can get from Auschwitz to Wieliczka by bicycle and visit both KZ and salt mine in a single day :)

Yes, it is possible to do the single trip with Auschwitz and Wieliczka in one day!

Hiring a car, taking an organized trip, or just get Uber/Bolt/Freenow/cheap taxi (see below sections) would be my recommendation. Public transportation would be cheaper but yet more challenging option. It requires more free time and take-ins, but it is not impossible.

You may also get a bicycle trip. Having 5.5 - 8 hrs. spare time (depending on the month) and 80 km distance, you can get to Wieliczka by bicycle.

NOTE that Auschwitz in Polish language is Oświęcim. In Poland, Auschwitz name is considered more as the concentration camp and Oświęcim as both camp and the city.

The Auschwitz concentration camp opening hours varies month by month and are:

These are the hours of entrance to the Museum. A visitor may stay on the site of the Museum 90 minutes after the last entrance hour (i.e. 5.30 in February or 8.30 in July)

As a minimum, however, at least three-and-a-half hours should be reserved.

Please note that Wieliczka has a single salt mine. Another salt mine open to sightseers in the region is Bochnia Salt Mine which is located slightly more than 40 km (~25 mi) from Kraków.

Wieliczka Salt Mine opening hours for the "Tourist Route" are:

The closing hour means "hour of closing ticket desks and last group of tourists entering the mine."

Please note that alternative routes (Miners' Route, Pilgrims' Route, Group Adventure, The Mysteries of the Wieliczka Mine) have different schedules.

I'd suggest to start with Auschwitz-Birkenau concentration camp.

Assuming the last entry to Wieliczka Salt Mine is either 7:30 PM or 5:00 PM, that gives you consecutively 8 or 5.5 hours of time (depending on the month) for getting from Auschwitz to Wieliczka.

The distance from Auschwitz to Wieliczka is approx. 80 km (~50 mi). The route can be taken via "A4" highway and it takes, in the optimistic scenario, 1 hour. You may use Google Maps which calculates pretty accurate traffic in Poland. I wouldn't expect much traffic in the noon/afternoon time.

Hire one and you will have a plenty of free time. Remember to use Google Maps to avoid tolls and traffic.

Whether you go by bus, minibus or train, if you want to check timetable online, you should probably look for:

That may be obvious, but some may want to look for Auschwitz rather than Oświęcim.

Go to the e-podroznik (English language available) and check the route for your destination. There are many options available and the website lists the travel time, walking time, transport type, prize and option to buy a ticket online (for some routes).

The Museum is located on the outskirts of the city of Oświęcim on national road 933 (note: entry to the parking lot is at Stanisławy Leszczyńskiej Str. no. 16). The Museum is about 2 km. from the train station and can be reached from there by local buses.

Transportation between camps is as following:

Communication between former Auschwitz I and Birkenau concentration camps

Auschwitz I and Auschwitz II-Birkenau are situated 3,5 km from each other.

There are paid car parks available near both former concentration camps.

Every hour the museum bus shuttles from one concentration camp to another. Departures from the former Auschwitz concentration camp: between April - October every 15 minutes, between November - March every 30 minutes. No bus fare is required.

Taxi services are provided by HALO TAXI company. You can find a taxi at the taxi rank in front of the Museum entrance. You can also call a taxi using the following phone number: +48 32 19 194.

The three kilometre distance between the former concentration camps can be covered by foot (through streets: Leszczyńska and Wyzwolenia), crossing the by-camp premises, where during the occupation were German industrial plants and workshops, warehouses, offices and technical backrooms, in which the prisoners would work and die. There are preserved remains of a few railway sidings and ramps [link to Judenrampe], where the trains with deportees would stop and the members of the SS would make the selections. 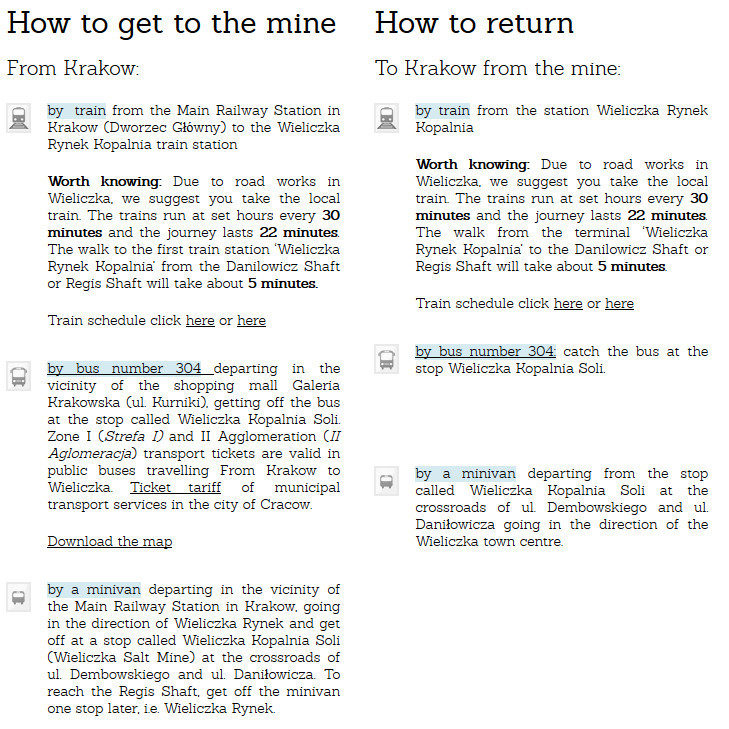 There are many organized tours in Kraków, so you may easily reach one and ask for a single day tour.

You may also try Uber, Bolt or FreeNow.

I've just checked Uber and Bolt options -- it costs around 275 PLN to get from Oświęcim to Wieliczka.

If not, you may try to call either iCar or Mega Taxi, which are the cheapest and the most reliable taxi options. Both taxis have mobile apps, so you may use these as well.

It's around 80 km to get from Auschwitz to Wieliczka, so... why not biking. Having 5.5 - 8 hrs. spare time (depending on the month) and 80 km distance, you can get to Wieliczka by bicycle.

Also, I'm wondering if it will be cheaper and more cost-effective to join to an organized group or do it on my own?

Organized trip would cost you about twice as non-organised trip with public transportation. The cost of a single-day organized trip with tickets included is 260 PLN (~60 EUR). An entrance to Auschwitz-Birkenau concentration camp is free. An individual ticket for Wieliczka Salt Mine costs from 80 PLN (~20 EUR). Public transportation requires more take-ins and may be much more difficult, but still – it is doable.

It's not easy and not recommended to do both in one day!

The best is either to have the private car or to choose the rush tour starting very early morning:

The tour of Wieliczka Salt Mine takes at least 3 hours. The location of the mine is half an hour drive by car from the center of Krakow. The town of Oswiecim (in German: Auschwitz) is about at least 1 hour and 15 minutes drive - better to say 1,5 h drive by car from Wieliczka (the highway is distant). And you need there at least 2hours to see the most important parts of Auschwitz KZ.

You should add an extra 1h for traffic jams (very common in Krakow) and it is: 3,5-4,5 hours of drive + circa about 5-6 hours for both tours (it's not easy to shorten them, especially in Wieliczka Salt Mine where is almost obligatory to have the reservation for the entrance). So it can be a tiring 10 hours without lunch and stops. Let's say 11-12 hours.

As users before suggested - it's quite difficult to make it in one day, but it is possible.

From Krakow to Wieliczka it's not very far, but there can be traffic. Traffic between Wieliczka and Oswiecim is also quite "difficult", and it would be more then hour one way. For Wieliczka - You need about 3-3,5h with guide only, for Auschwitz more or less the same time, and it's also suggested to have a group, toured trip. Summing the fact, that You need to move around quite a lot, and have 2 guided tours, did you consider ordering a day service? It may be the better way in your situation (low on time, lot's to see :) ).

4
How to find a cheap tour to Wieliczka salt mines from Krakow?

20
Are there ways to keep long-distance land transport costs down in France when not planning in advance?
11
How to get to Auschwitz-Birkenau from Wroclaw?
13
What is the cheapest way of traveling from Berlin to Krakow?
10
How can I get from Krakow to Prague?
3
How to get from the airport to the bus station in Krakow and how long does it take?
6
How to get from Lviv (Lvov) to Krakow by train on the cheap?
6
Salt mines in Poland -- differences between Wieliczka and Bochnia?
10
How can I get information about bus lines between towns within Poland?