Ask Question
Asked 9 years, 3 months ago
Active 5 years, 5 months ago
Viewed 534 times
6
Closed. This question is opinion-based. It is not currently accepting answers.

On my trip to India I'm visiting Kerala about mid way timewise and since that state is pretty famous for its spices, I'd like to know which spices are the most famous (and the best) ones which I absolutely must buy there and not elsewhere in India.

I mentioned that Kerala is mid way during my journey because I don't intend to travel across half of India with a couple of kilos of spices in my backpack and will therefore buy only certain spices in Kerala and the rest in Delhi, right before my return flight. 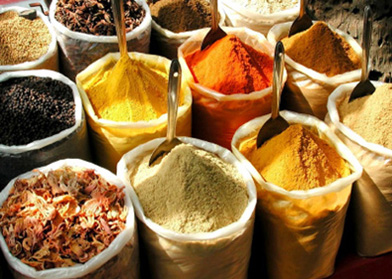 Image by horst72 from iStock photos.

I understand that this question is kinda subjective but I think it can be answered since there must be some spices such as saffron that are much better there. I do cook a lot and use different spices all the time but I don't know even the hundredth of all the spices India has to offer so need some suggestions on that front.

The two I would say you must get: peppercorns (black, green, white, or mixed) and cinnamon. Yes, these are very common spices that are widely available around the world, but the pepper and cinnamon that I got in Kerala are the best I've ever had. (Bonus: You can buy cinnamon bark in a fresher state; flat bark pieces rather than the curled, stick-like cinnamon that is the final product of a full drying. The flat bark works great for infusing cinnamon flavor - throw pieces into hot apple cider, rice when you're cooking it, any curries. It's delicious.)

The Wikipedia page for cuisine of Kerala lists cinnamon, cardamom, ginger, green and red peppers, cloves, garlic, cumin seeds, coriander, turmeric as the most common spices. (I don't know why green and red peppers are listed there; I think I'm not sure whether they mean bell peppers or chili peppers.)

This Kerala tourism site has a similar list, but it provides more information about the varieties available and which reasons they're grown in.

Cardamom, clove, vanilla, tamarind, and turmeric are all popular, too. It looks like Indian saffron is usually grown in Kashmir, so you might be better off buying that in Delhi. Many Indian spices are grown widely throughout India, so you could theoretically purchase all of your spices in Delhi; I lived there for a short while and every spice that I found in markets when I visited Kerala were also present in Delhi spice markets. Merchants in Delhi often market their spices as being from Kerala. However, I would definitely buy pepper and cinnamon in Kerala still. Try eating fresh peppercorns (not cured/dried) if you get a chance, too!

You mention that will be travelling for a long time. This makes the possibility that the spices you're carrying will get damaged in transit (moisture leaking into containers). None of the spices mentioned in Laura's answer are particularly that expensive so if you're ultimately flying out of Delhi, you might just want to buy them from open-air vegetable markets in Delhi itself which in itself is a unique experience. (For lower prices, shop in areas of Delhi with higher concentrations of South Indian population, such as RK Puram.) The exception is saffron - while saffron is used in many different Indian cuisines, it's mostly grown in Jammu & Kashmir, and it's definitely cheaper to buy saffron there if you're going.

And while they aren't spices, I would also recommend buying tea or coffee if you're into that. Normal tea is better in Darjeeling (east India) but in Southern India, you can get really good flavoured teas such as cardamom tea for cheap.

Not the answer you're looking for? Browse other questions tagged food-and-drink india kerala or ask your own question.

6
Bungee jumping and zorbing in India
6
Language culture and Food culture in South India?
16
How to lock a backpack?
9
Chennai to Pune - bus or train?
4
Should I use a lockable suitcase in India?
11
Can you split India in distinct focal points to travel to?
9
What are the food specialties of Charleston, South Carolina?
14
Acceptable ways to bring Fruits and Vegetables into the US
2
How best to provide lost details of old travel to India for Indian Urgent Business Visa from UK