What “National Identification Number” to enter in an ESTA application, for a German?

I’m trying to complete an ESTA application (German citizen). One of the questions asked is about a National Identification Number, with this explanation:

This leaves me wondering what I should enter. “Number on your identity document, other than a passport,” sounds like they are asking for the identity card number (Personalausweis). The term “identification number”, on the other hand, rather makes it appear like a permanent identifier such as the tax payer identification number (Steuer-Identifikationsnummer). It’s also conceivable that neither is applicable and I should enter unknown instead.

I’ve tried searching for further information on the embassy’s website, but found this number mentioned in one (unhelpful) place only; apparently the question was added to the form less than a year ago, which might explain why I only find few mentions elsewhere on the web, and they are all inconclusive.

Interestingly, this question appears only after I’ve selected the country of citizenship (Germany in this case), and it does not appear for many other countries; e.g., this question is asked for citizens of the Netherlands or South Korea, but not of Austria, Switzerland, Sweden or the UK.

According to the US Visa Service this number refers to the ID number on the German Personalausweis:

(emboldening added) which Google translates as: 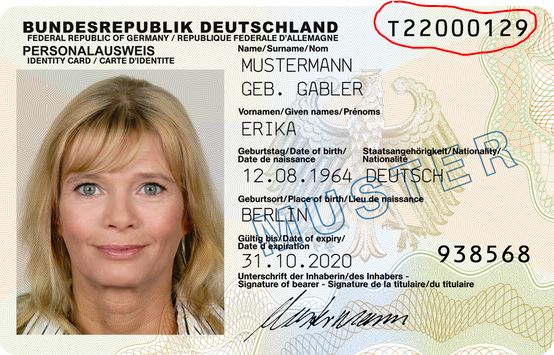 Wiki has a page on National Identification Numbers.

In Germany, there is no national identification number in the full meaning of the term.

So as a German citizen, you'd be putting down Unknown.

Not the answer you're looking for? Browse other questions tagged esta us-visa-waiver-program german-citizens or ask your own question.

3
What should I write in the "National identity number" field of the Schengen visa application form?

8
ESTA Application: Is a US state ID a national ID card?
5
ESTA, national identity card for travel by any other country?
4
Too many foreign passports for ESTA
5
ESTA: Previous Citizenship/Passport? (for both Stateless and Soviet Union ex. nationals)
10
Applying for ESTA, or any travel document (vacation) as an ex US Permanent Resident Card holder
9
What is the National Identification Number of Dutch citizens?
3
Applying for ESTA - for Japanese/Canadian kids
4
Is an ESTA likely to be denied if I have had a previous Temporary LPR/ Greencard that is now expired?
2
Few Questions About ESTA Form
3
ESTA form: Mention the city district in the contact information section?