I was wondering if you have a concealed carry license (U.S.), would that license apply in other countries? Or would you be breaking the other countries' laws? I also know some countries have very strict gun laws, and do not allow guns in their country. Would they apply to me as a non-citizen?

I'd like to take a snubby (small, low caliber revolver) for personal protection to some of the more dangerous countries I want to visit.

Every country has their own laws governing handguns. Your license is for the US, under US (or state-specific) laws.

Firstly, you'd have trouble at the border, as you generally need permission or a license to carry a gun on-board a plane, boat, train, or bus, or across international borders.

Secondly, you would need a license under the laws of the country you're visiting to carry the gun, concealed or otherwise. These laws often differ depending on the size or capability of the weapon as well.

I'm sorry, just because you're a US Citizen doesn't mean you get to overrule the laws of other countries. ;) (no offense intended, just answering your original question)

Mark Mayo's answer is the best answer to this question; it is an appeal to common sense. I simply wanted to add some legal context for the UK. There are intersecting regulations for the EEA as a whole which are roughly similar.

The 'generic' answer is that gun permits are generally issued by individual states, like Kentucky or Arizona. Individual states do not have the constitutional authority to engage with foreign governments and this limits their jurisdiction. Notable exceptions are...

The UK (along with the rest of the EEA) participates in both of these subject to national policies, like that for driving permits. Gun permits are not taken up in the Hague Convention. Using comity, you might find a country willing to recognize a gun permit issued by a US state, but for comity to work, that state would have to offer reciprocity and states cannot do that for the above mentioned reason.

So much for international law, on to specifics for the UK...

The relevant publication is Bringing Goods into the UK and it's targeted to Brits and permanent residents but has valuable information for visitors as well. The enforcement arm is HM Revenue and Customs and the controlling legislative reference is the Commissioners for Revenue and Customs Act 2005.

The gist of this is that you need to declare it well beforehand and present a UK type of permit for it. Assuming you get far enough along in your arrival to select a declaration channel, you would select the RED channel. I have used that channel a number of times and the HMRC staff has always been friendly and accommodating. So it's possible in theory, but the relevant permits require a permanent UK resident to sponsor your fire arms application. Gun permits in the UK are issued by the police and the visitor must prove they are attending a 'shooting event'.

That addresses the legal side of things...

The remainder of this answer assumes that you are a naive traveller who is carrying prohibited fire arms into the UK with the assumption that it's ok because you are an American...

If you are carrying a fire arm into the UK, your carrier is obliged to report it to the Border Force in order to comply with a Statutory Instrument they are subject to. They will do this before the flight arrives.

At the border, your fire arm will be placed in their custody and logged, cataloged, recorded, wrapped in a plastic bag and nicely stored for you (in a permanent way)... 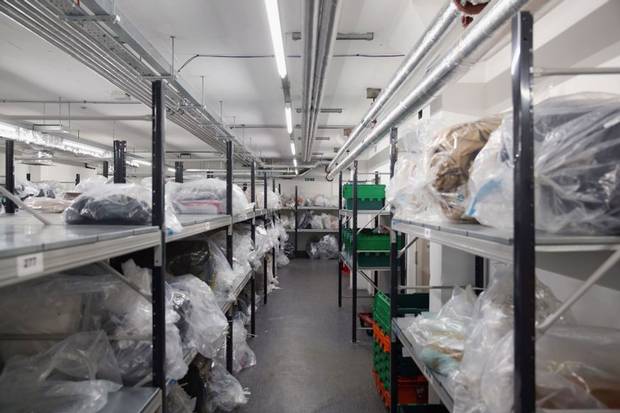 Source: The Independent, fair use

So you can show them your gun license and explain the Doctrine of Comity to them and after they stop laughing, they will get down to business...

They will use various provisions in the Criminal Justice and Immigration Act 2008 to write you up and send you back to the US. They will then use various provisions in the Immigration Act 1971 to make sure you will never be back. After that they will use the Five Eyes Treaty to let their friends and allies know about it. They will also tell the DHS. You will not have to worry about questions like this in the future because most of the civilized world will put a stop flag on your biometrics.

Also, be sure to read the Chief Inspector's report. 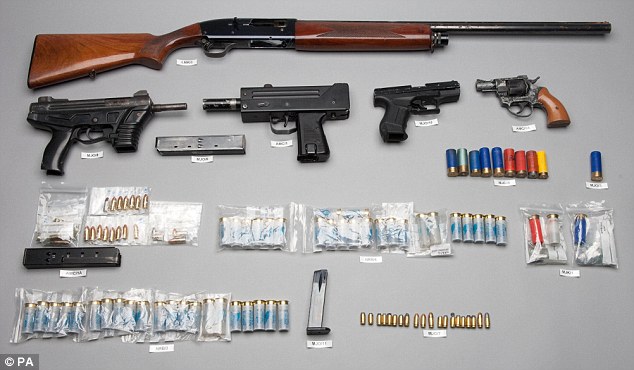 Adding parenthetically... This answer comes from an American (who holds two other nationalities) who has spent long hours of pro bono time at Heathrow and Gatwick providing legal assistance to Americans (and others) who have been placed in detention and awaiting their paperwork prior to removal. Observations have been derived from first hand experience.

Travelling with a firearm (in general)

I've actually seen this scenario, where there has been an assumption by the (US) traveller that they would just be able to enter another country with their firearm.

However, as @Mark Mayo states, each country has their own laws in this regard. It's important to realise other countries are likely to have much stricter rules.

Typically, as long as you follow the rules of your local airport / carrier, you'll find out about local restrictions without too much issue. This means declaring that you have your handgun at the earliest opportunity (at border control / customs etc.) on departure and entry. However, it's much wiser to find this out in advance (or you risk having your property confiscated - and / or potentially face criminal prosecution).

For example, if you travel to Canada with your handgun, as long as you declare it at border control, they'll usually just inform you that you can't bring it in without a licence - and often give you the option of not travelling to Canada or allow you into Canada without your gun (I believe they retain it until your return).

Similarly, the UK requires a licence (in the form of a visitor's permit) to bring a gun into the UK. However, that gun has to conform to UK rules - your handgun would be a prohibited weapon (banned) and you won't have a UK legal reason to possess any gun (self-defence).

If you declare it at customs, they won't allow it in the UK - but you're unlikely to be prosecuted if you've been open and honest about what you're carrying. Disguise that fact (as @Thorsten S. says) and you're likely to be arrested and imprisoned - illegal possession does carry a 5 year minimum sentence.

Concealed weapons and their use

First, I'd probably reconsider where you intend to travel to. If you're going on holiday, I'd imagine it'd be much more relaxing and enjoyable to go somewhere where you don't feel the need to be armed. If you're travelling on business, your employer is generally expected to provide appropriate security for any "high-risk" nations.

If you find a country where you can bring a your firearm (which is likely to be rare for purposes other than sport and hunting), there will probably also be strict rules about how and where you carry and use it.

Every place you visit and each building you enter may have different rules to what you're used to - really, border entry would be the least of your concerns. It really would be a minefield of situations where you could land yourself in trouble (either with the authorities or someone misinterpreting your intentions). I'd strongly suggest that you don't place yourself at risk in this way.

Very broadly, you shouldn't take anything to another country unless you are fully aware of its legal status there.

Obviously not an exhaustive list - but key topics are:

It's not a coincidence that most countries ask you to sign a declaration, mentioning the above list (in various forms) on entry.

Being a citizen of another country does not grant you any special exemptions over local laws in the country you're visiting.

Being a US citizen certainly does not exempt one from local laws, even visiting countries close to home. The OP didn't ask about Mexico, but it serves as a good case in point. From Wikipedia article on gun politics in Mexico: "The US Department of State warns US citizens [and all persons regardless of citizenship] against taking any firearm or ammunition into Mexico without prior written authorization from the Mexican authorities. Entering Mexico with a firearm, or even a single round of ammunition, carries a penalty of up to five years in prison, even if the firearm or ammunition is taken into the country unintentionally." When I lived in Phoenix, I often read of cases where people inadvertently transporting a few loose rounds of ammo into Mexico wound up in significant legal trouble.

In addition to the penalties for illegally importing or transporting a weapon, you may find yourself on a completely different legal footing. Due process varies from country to country, and even the basic tenet of "innocent until proven guilty" or access to counsel may not apply.

To add to other's replies, the US Dept. of State says Don't Do It. https://travel.state.gov/content/passports/en/go/firearms.html

Not the answer you're looking for? Browse other questions tagged legal international-travel us-citizens security firearms or ask your own question.

2
Can Somebody travel with their gun internationally?
9
What is a good (legal) form of self defense in China
11
Carrying Bitcoin Internationally

15
Are there countries other than the Netherlands that support hitchhiking?
5
Are there any "Fantasy Passports" that are recognised by other countries?
5
Replacing windshield with Mexican auto permit
14
Same sex marriage in the UK for foreigners on vacation
4
Travel to France from Non-EU countries with a Dutch residence permit?
5
Are there consequences to carrying an old passport together with a new passport?
25
Laws requiring identification at hotel check-in
81
Personal security during a business trip to Moscow