Can I take a boxed bike (bike packed in a box as per airline carrier requirements) on the train from Schiphol to Central Station Amsterdam?

This is what they say:

Count as 'luggage' and are always allowed on the train for free, regardless of travel times. On so-called 'Intercity Direct'1 trains, they have to be completely folded in and stowed away in the luggage compartments. Implicitly, this means the folded dimensions should not exceed 120x90 cm.

Incur a surcharge, and always require the purchase of a special 'bike ticket' (you can get them both from the vending machines as well as the staffed desks). This ticket costs €6 and is valid for a whole day, regardless of travel distance and route.

These are the restrictions for travelling with a regular bike and valid bike ticket on NS trains:

1 Intercity Direct trains run a 'fast' service from Amsterdam Centraal -> Schiphol -> Rotterdam Centraal and Breda stations (and vice versa) twice an hour during peak hours from Monday to Friday. This service incurs another surcharge if you travel the Schiphol <> Rotterdam leg, unless you already have a ticket for the international intercity train that travels between Brussels and Amsterdam/Rotterdam.

Now, as said, those are the official rules. In reality, however, train staff are generally reasonable people (YMMV) and as such, they may agree with you that a boxed bike could be considered 'luggage' (rather than a proper bike) and thus does not require a surcharge ticket. That's what the first link in @RemcoGerlich's answer is about: the rules say one thing, but in practice there's room for interpretation and flexibility. It's a bit of a gamble though, and depends completely on who's working the train on your day of travel, and (probably) how well that person slept the night before. Worst case scenario: in theory you could receive a fine. Highly unlikely though and I've never seen or hear it happen. Instead, it's more likely that you'd be asked to take your belongings and leave the train for not having the surcharge ticket, and then take the next train with bike ticket. Again, train staff are people who can be reasoned with, and they'll understand the slightly 'grey area' a boxed bike falls in. Especially if you add the fact that you're a tourist. On the other hand: you could just play it safe for €6 and not risk running into an awkward discussion with a potentially unhappy ending.

Some final tips and pointers:

The bike compartments are signed on the outside of the train, usually on the doors. They're pretty self-explanatory, so keep and eye out for these: 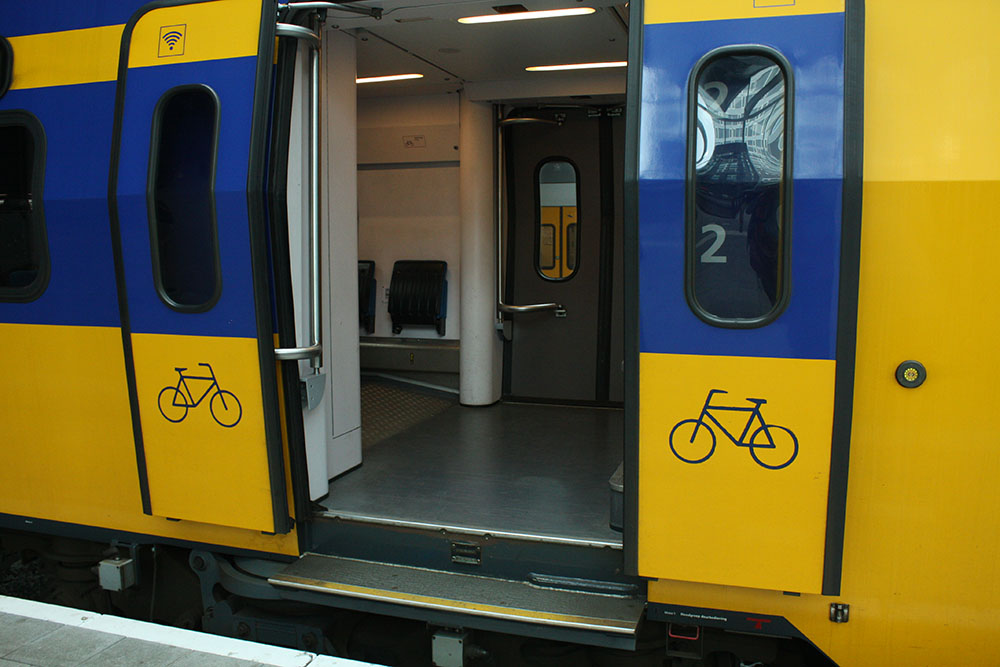 Luggage on your bike

Unless instructed otherwise by staff, you're supposed to take off any luggage you may have stashed on your bike.

Your bike during your train ride

By all means, lock it, keep an eye on your bike, and make sure it doesn't obstruct pathways and/or hinder fellow passengers in any way. Train staff are authorised to refuse to take you to your destination (read: they'll tell you to get off at the next station) if you don't consider other travellers and fail to follow instructions. Also, your bike is your responsibility. NS will not be in any way liable for what happens with your bike during your train ride. In any case, be sure not to leave any valuables on your bike during your journey. As a matter of fact, people travelling by bike on the train often just stay with their bike. I would advise you to do the same.

The train part of this question hinges on the question whether a bicycle packed in a box should be considered as a bicycle or as large luggage. You can argue a lot about this (https://forum.ns.nl/overige-producten-6/meenemen-fiets-doos-de-spits-vanaf-schiphol-8640), but I think it will depend on the opinion of the conductor you meet on the day.

If it's considered a bicycle, then you can only take them on the train outside of the rush hour windows 6:30am-9:00am and 16:00am-18:30am, you need to buy a "Dagkaart fiets" (day ticket bicycle) for 6 euro, and you need to place the bicycle in the designated area, there will be a bicycle sign on the door (see Willeke's answer to this question).

If it's just luggage, then it is larger than 85cm, and the conductor will decide whether he'll allow it. In practice that won't be a problem -- if again you travel outside of rush hour and put it in the designated space for a bicycle. So the ticket will be the only difference in practice.

I'd say, just buy the ticket, it is a bicycle after all.

I don't know what a good place to store it would be. Won't you be staying somewhere, where it can just be part of your luggage?

Not the answer you're looking for? Browse other questions tagged public-transport luggage amsterdam bicycles ams or ask your own question.

10
Moving to Netherlands: would taking train with a lot of luggage possible?

10
Can I use the OV-chipkaart to get from Schiphol to the center by train?
17
Can I take my bicycle into all German trains?
11
Cycle / Bike Hire in Amsterdam
7
OV-chipkaart or GVB day pass for within Amsterdam travel?
5
Amsterdam: day tickets from Sloterdijk to Centraal?
9
Traveling Amsterdam-Brussels with KLM ticket on Thalys - When / where does my ticket get stamped?
6
KLM with train segment from Schiphol to Brussels - take later Thalys train
6
Taking a non-foldable bike from Paddington station in London, UK